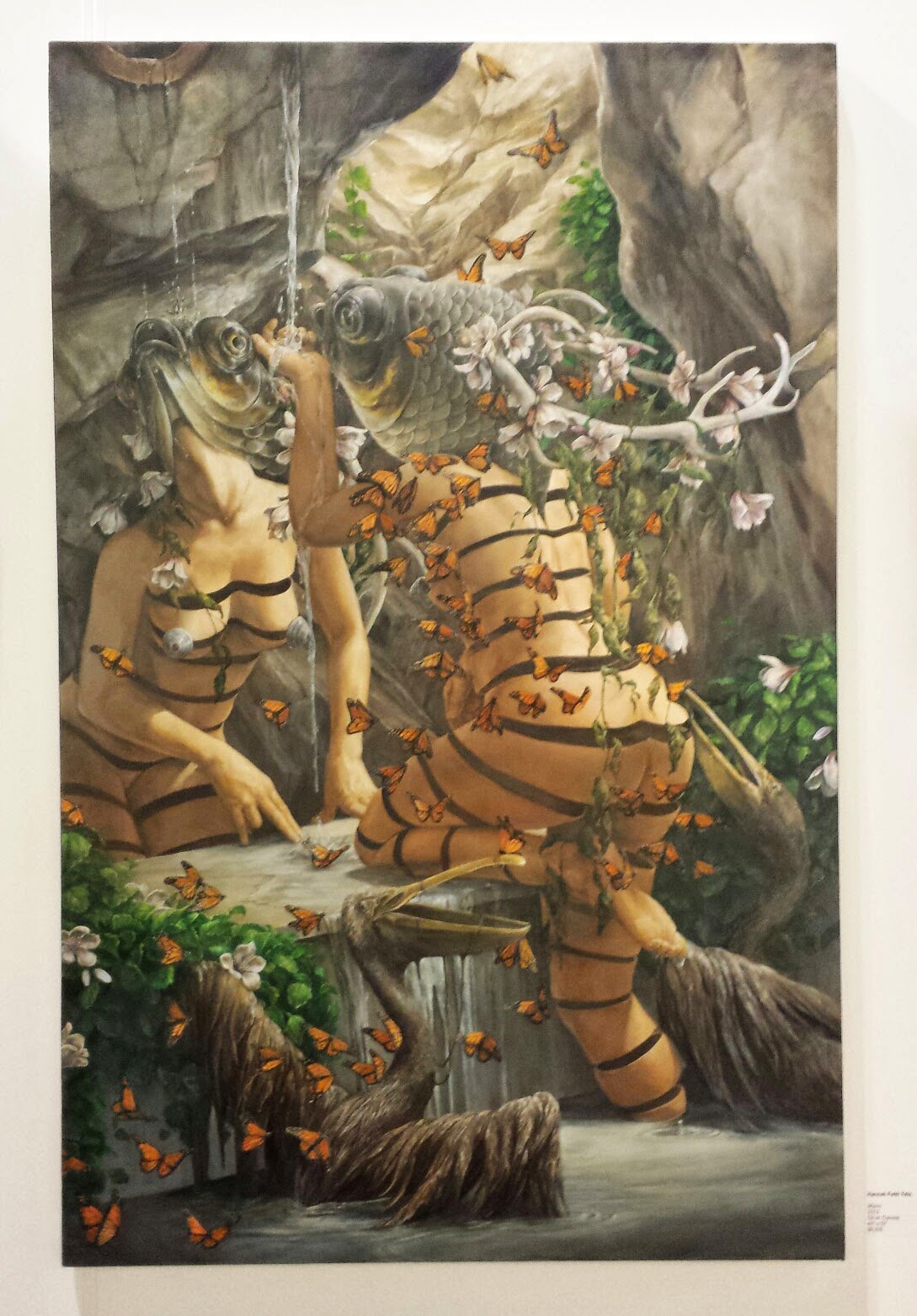 I've been attending the Fountain Art Fair in NY (and Miami) for many years, going back to the tugboat days (yes, tugboat, as in the fair was held on an actual tugboat in the Hudson River). I always thought of it as the more DIY venue of the art fairs because it had several booths by individual artists hawking prints, magnets, and sketches in a very street way. Fountain has its own unique energy compared to other fairs. With its move a few years ago to the Armory on Lex, Fountain gained room to spread its wings and have more of a conventional layout leading to a better (and warmer!) experience yet still retaining its flavor.


More galleries are exhibiting at Fountain now, and a few veterans of the fair put on mighty fine showings, particularly Mighty Tanaka Gallery of Brooklyn. One of their up-and-comers is (left) Hannah Faith Yata. Pop Surrealism has moved away from the more cartoony side of it and these days a very  painterly realism with elements of surrealism and fantasy is the hot ticket. 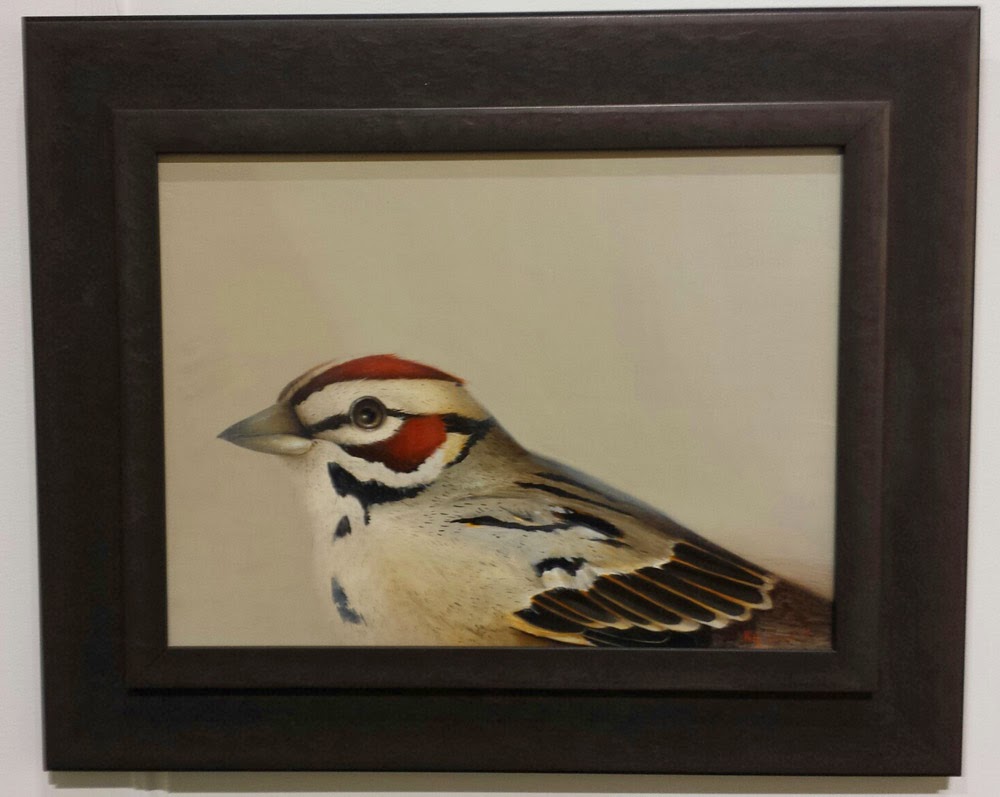 On the straight up realism side is this beautiful painting, "Lark Sparrow," 18x23, by Herb Smith.


Arch Enemy Arts from Philadelphia, a growing presence on the scene, had several mixed media pieces and plenty of painting (they, too, showed the aforementioned Ms. Yata). Maria Teicher had these impressive and disturbing portraits of people wrapped (suffocating?) in plastic bags. 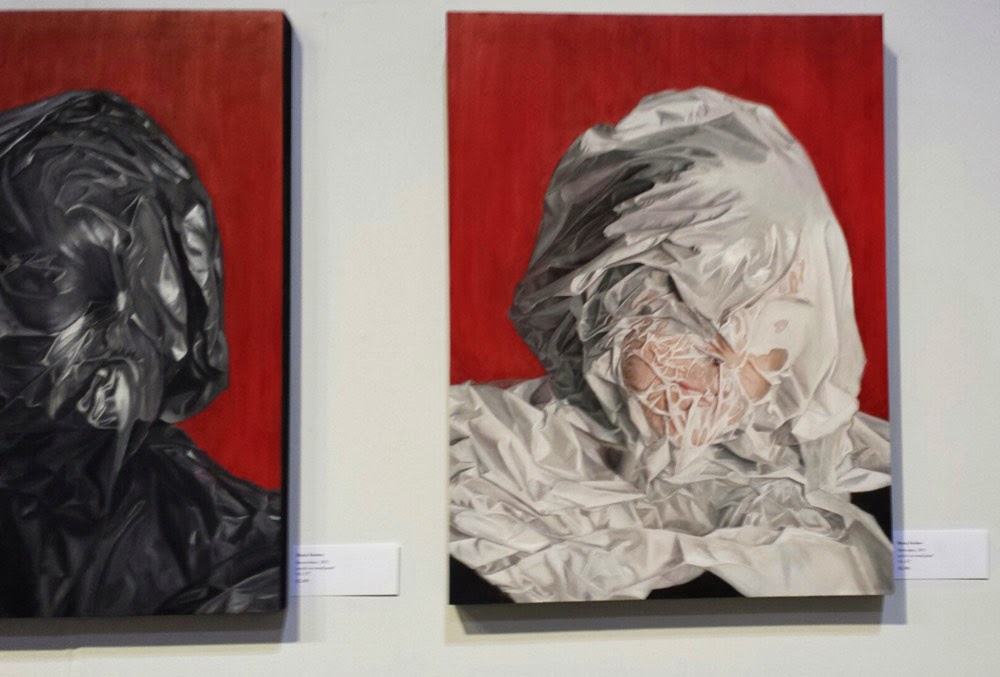 Sheri DeBow's "Crazy Like a Fox"  morphed two figures into one, both creepy and amusing. 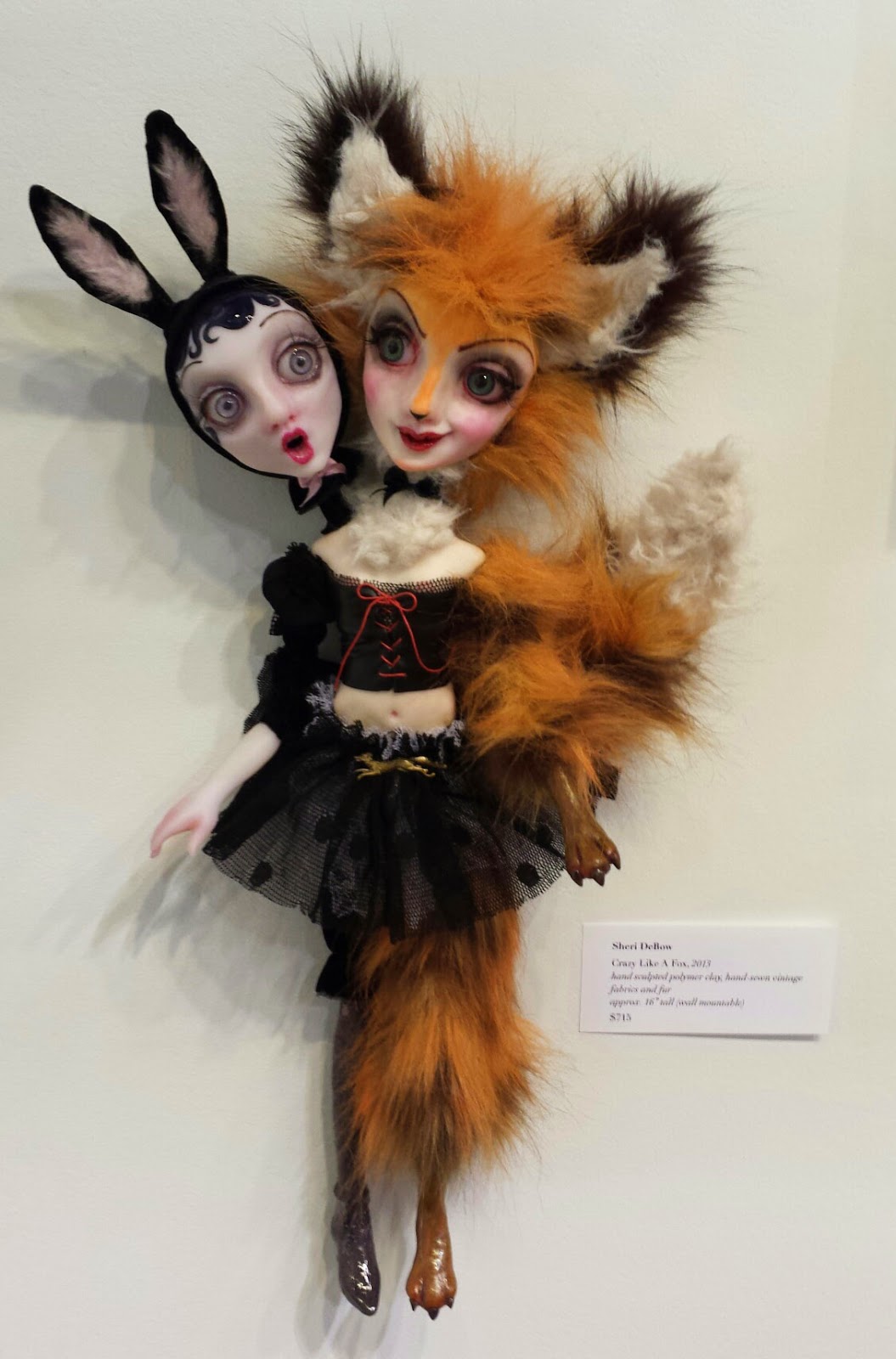 My father was a homing pigeon flyer. Not the ratty city pigeons, these were thoroughbreds and homing pigeon racing was referred to as "the poor man's horse racing." This piece was in the booth for Front Room Gallery in Brooklyn, unfortunately I couldn't locate the artist's name. 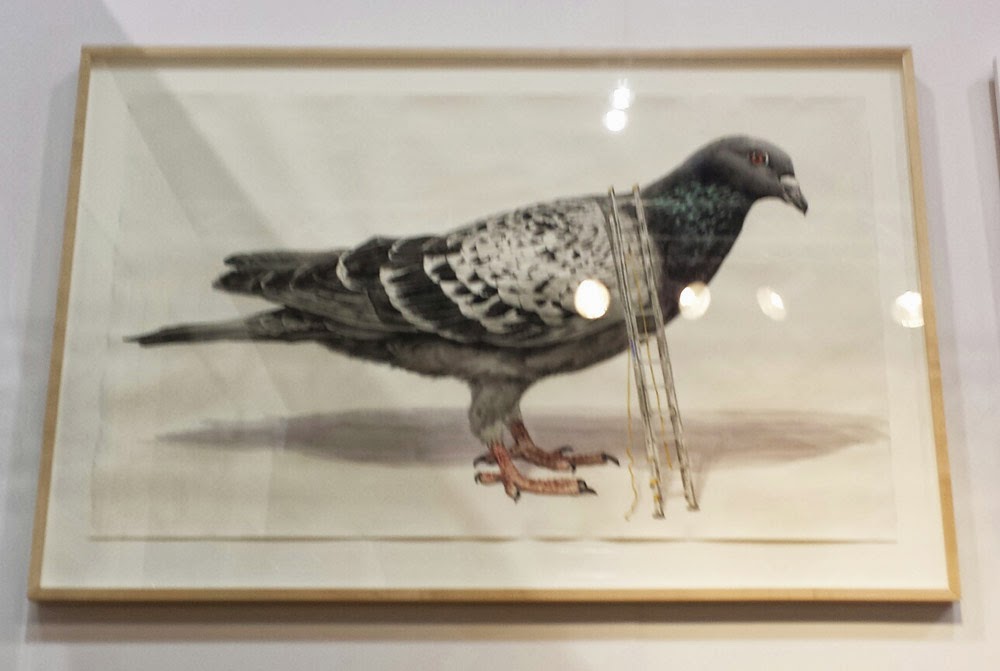 AHA Gallery of Brooklyn presented this piece by Jeremiah Johnson, whose work I became familiar with a few years ago via ada Gallery from Virginia. Photo's a bit blurred, but "House of Worship" is composed mainly of presecription bottles. 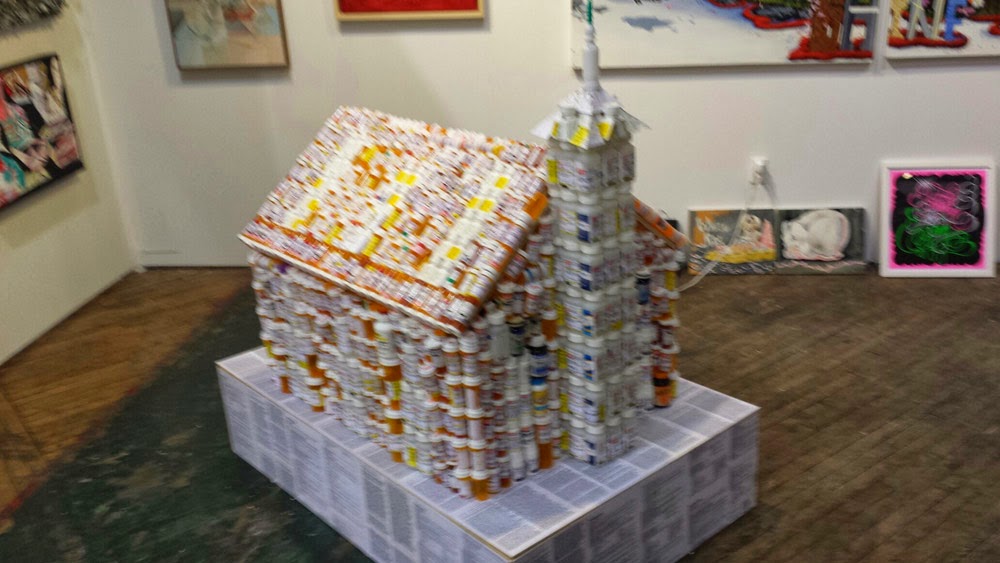 The "Print Posse," Fatherless, represented with live painting and lots of prints: 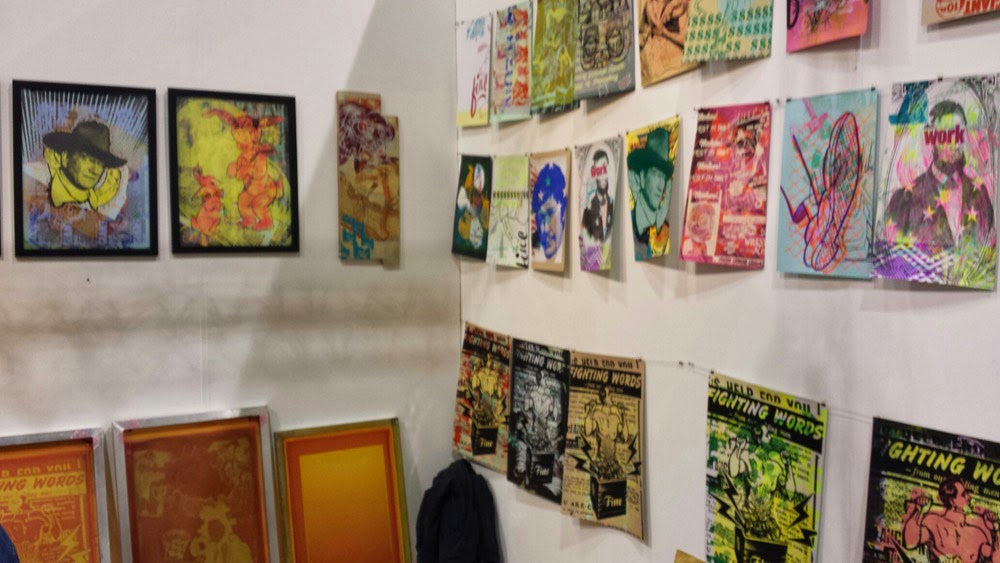 Painter Michael Hurt had his own booth, and this is a detail from a sprawling piece titled "9 Months, 3rd Shift" 69x32". Fountain really impressed this year! Below are more images from it: 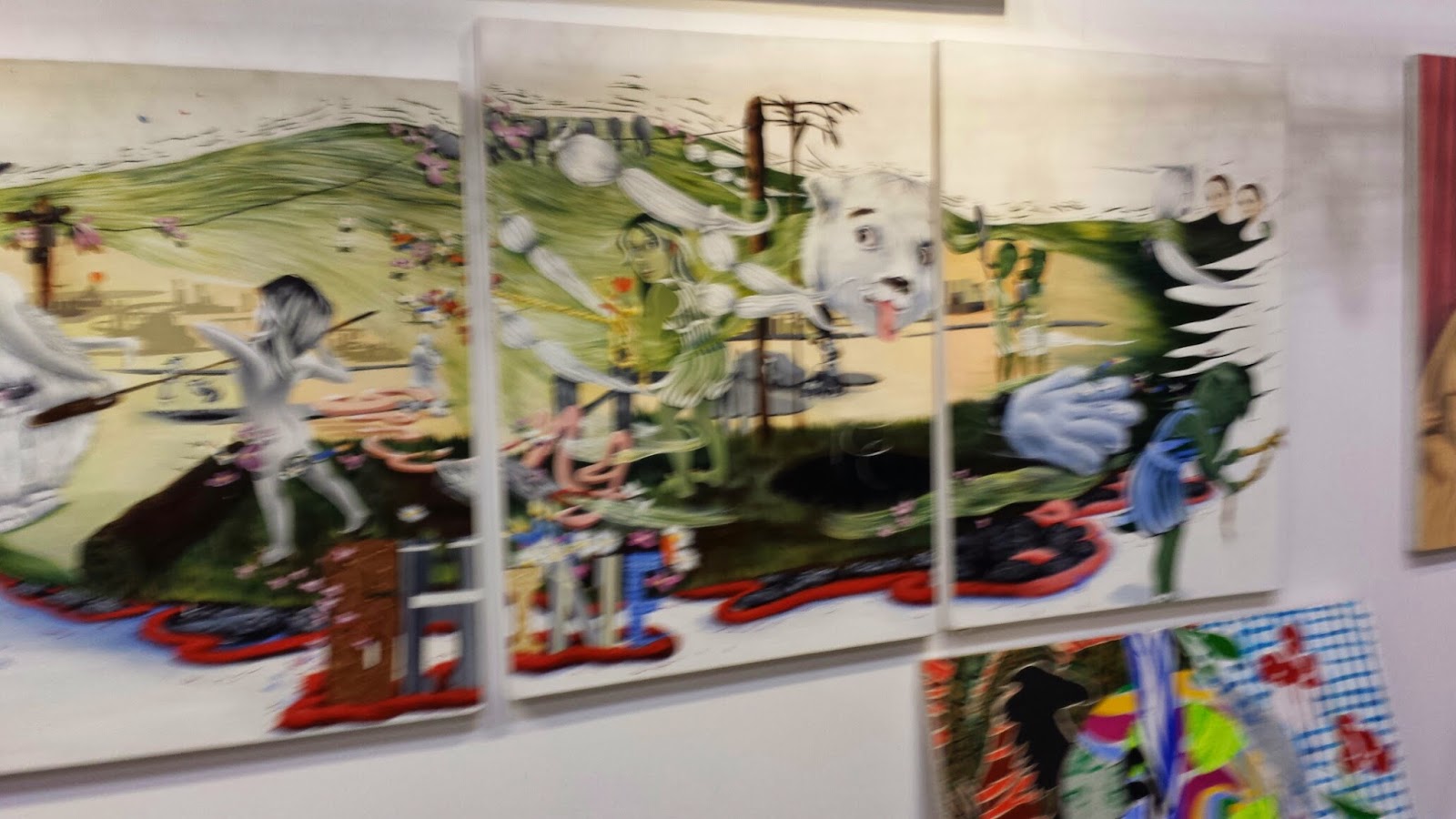 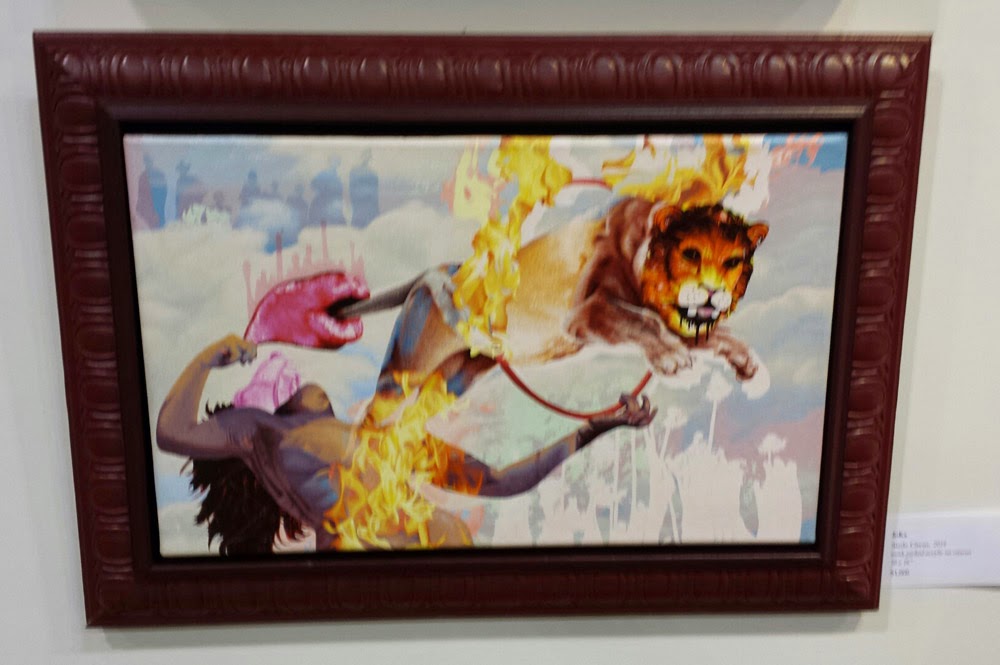 Posted by Joe Borzotta at 6:40 AM No comments: 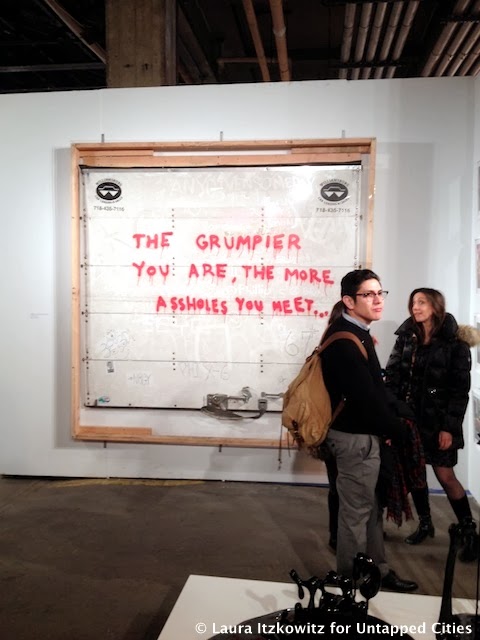 Scope was a solid fair much like Volta. Lots of different materials and styles, and quite a bit of pseudo life-like sculpture. And like Armory, several text pieces.

Copro Gallery from California, a gallery that focuses on pop surrealism, street, graffiti, etc had several interesting works, but they really needed 2 booths. It was really jammed up, and the Warhol heads and boxes piece would have been enough for one booth, they needed room to breathe. They were hyper-realistic, I assume a latex based material, mounted on pedestals with faux Brillo boxes in between. On the wall behind them were some fine paintings by Dan Quintana (below is "Cozen Den" 4x8') which unfortunately got lost and a bit over-shadowed. There was barely enough room to get between the Warhol heads and the wall, so viewing his pieces had to be done from the side or right up on them. 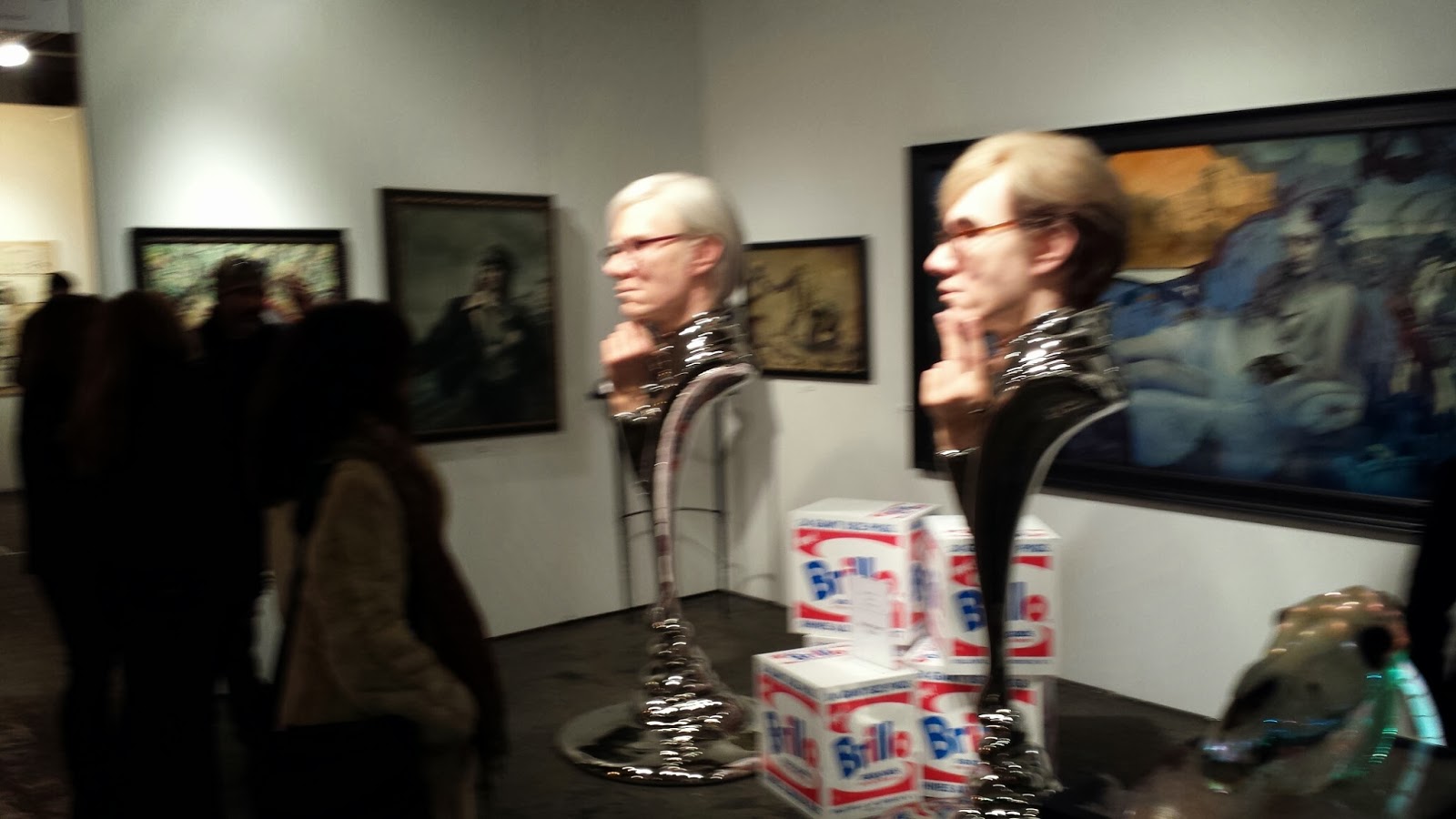 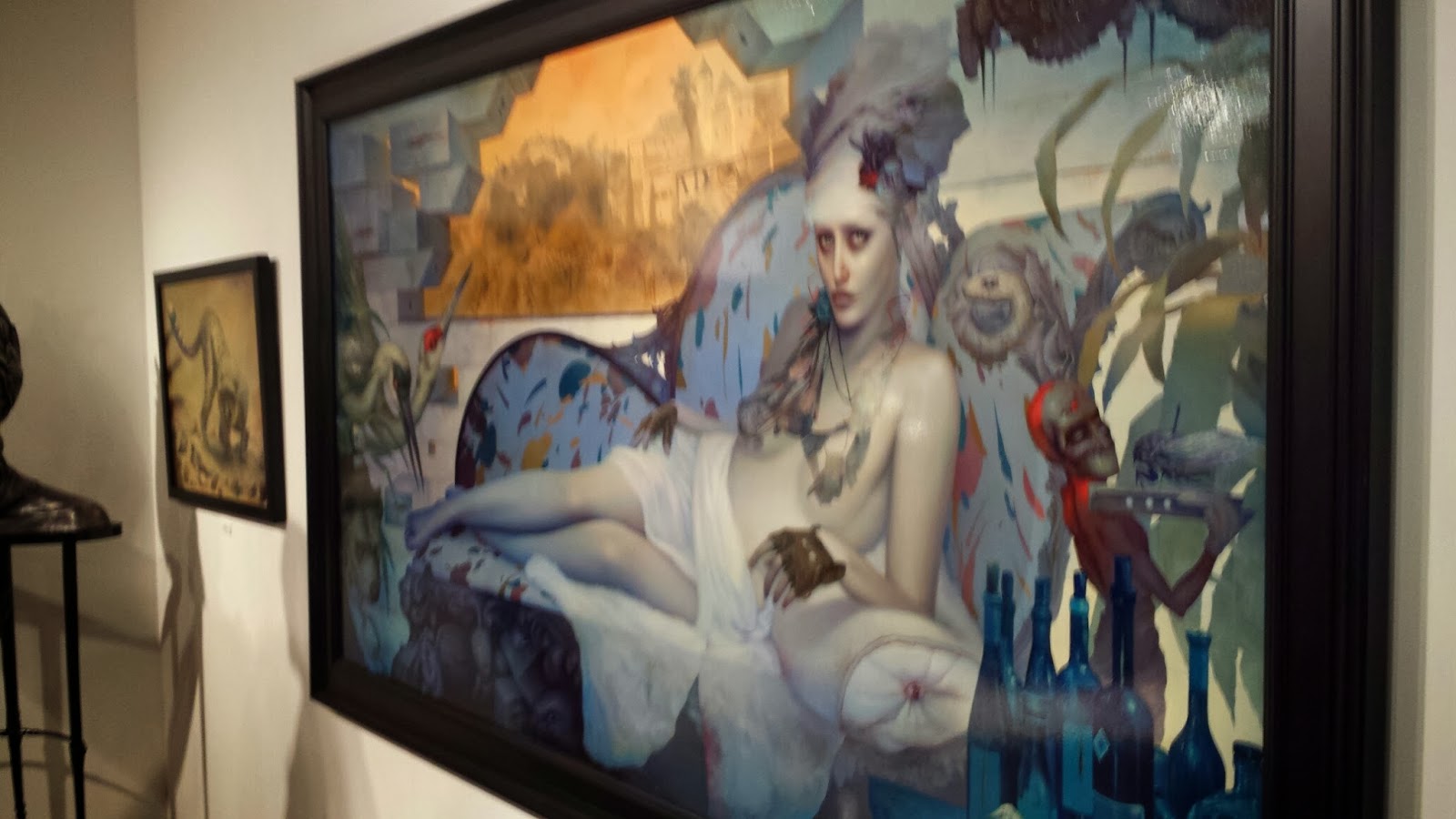 Converge Gallery from Williamsport, PA had Russian artist Ekaterina Panikanova's mixed media pieces consisting of books that are painted and drawn upon, mounted on wooden boards. Not a new concept by any means, but these go beyond the common practice of merely using the books as "canvas". The books are quite old and are mainly informational in nature, and the drawings and paintings on them are integrated in scattered, and somehow slightly disturbing way.

Mark Jenkins had these two sculptures at Fabien Castanier Gallery (LA). The one on the floor with the hoodie is "Time Out." 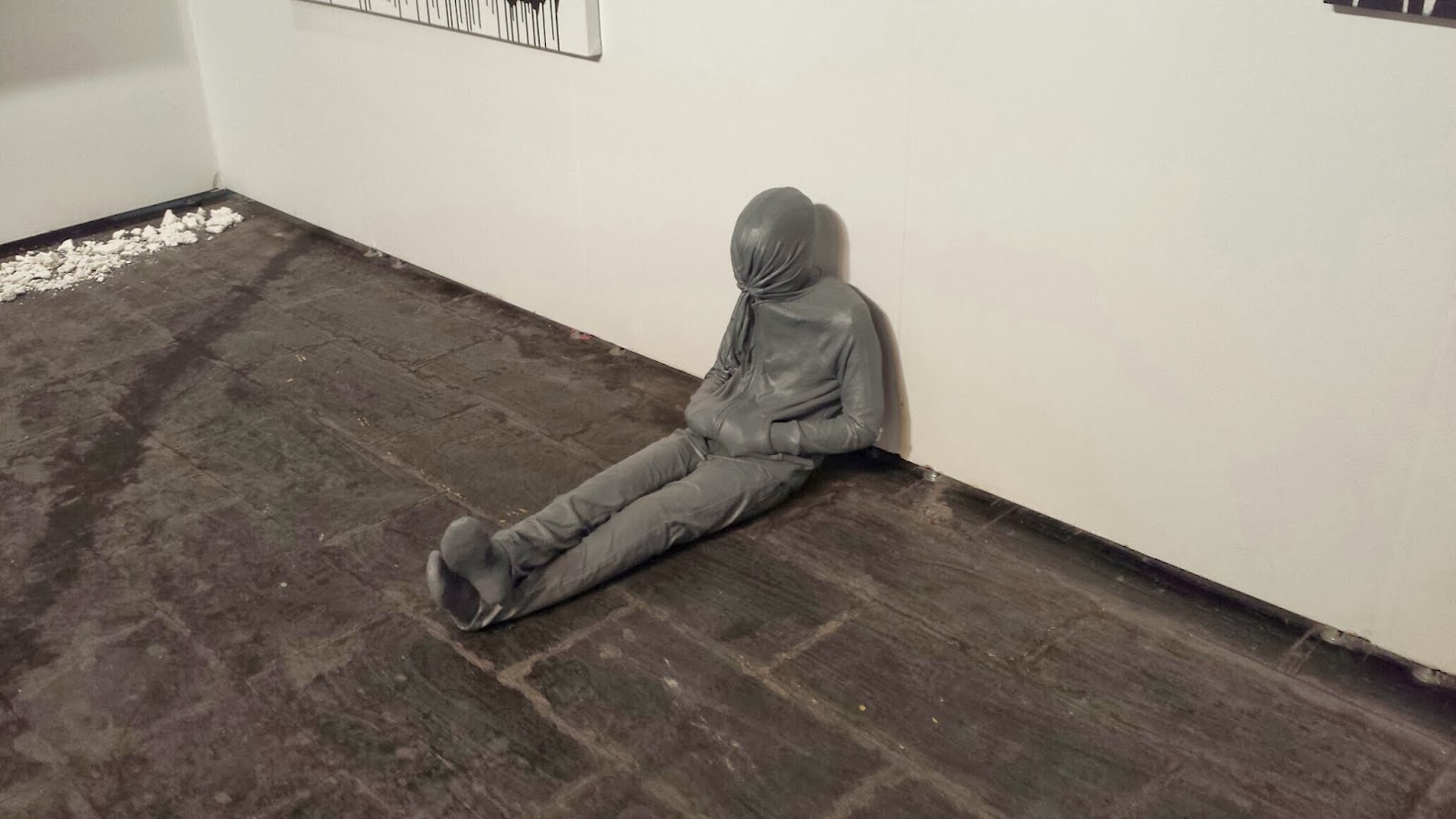 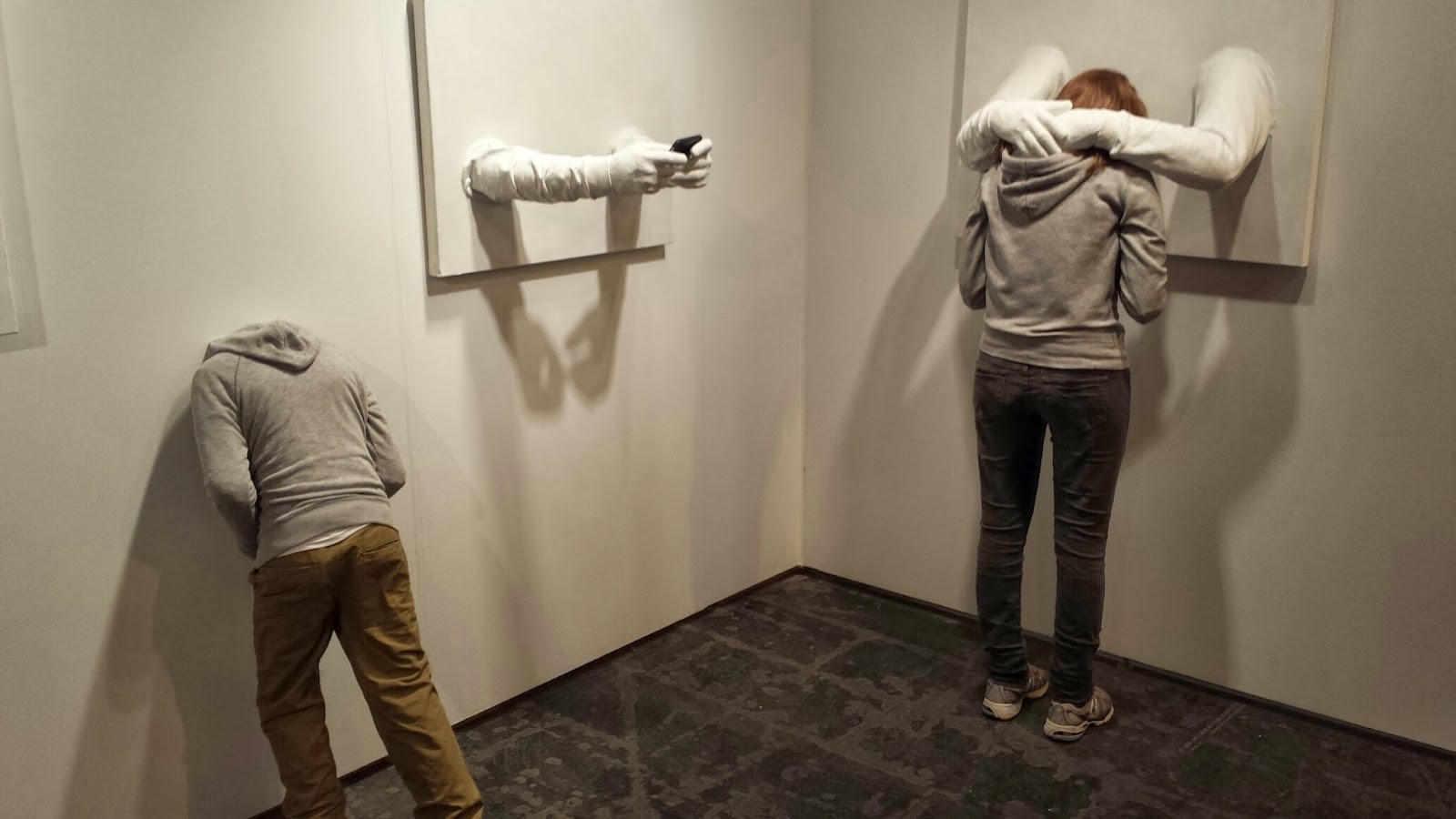 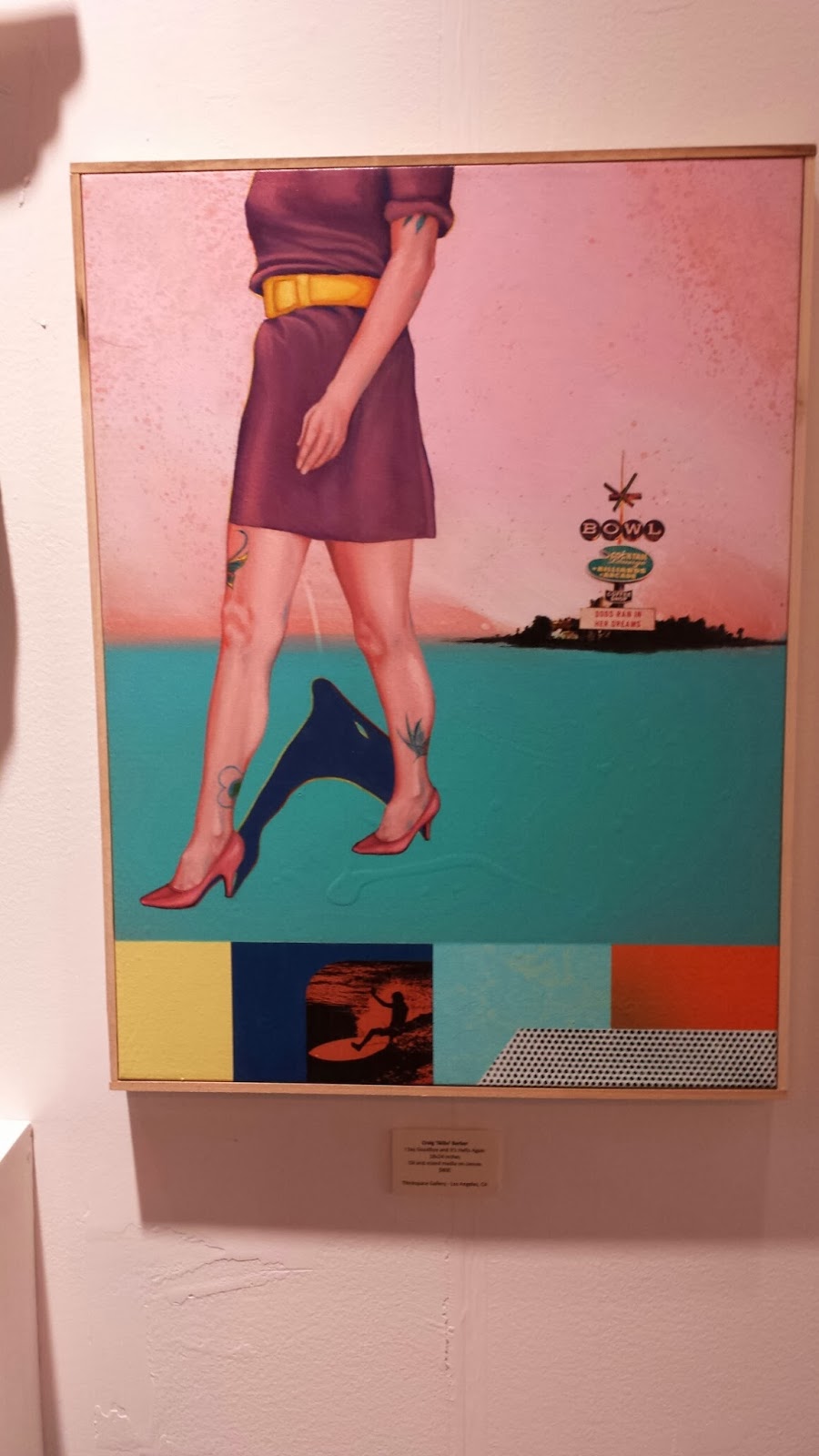 The Armory show is the big daddy of the NY art fairs each March. Running from Piers 92-94 along the West Side Highway and the Hudson River, there's quite a bit of ground to cover and art to see.

I go to these fairs with two sets of eyes: one as an artist, the other set as The Gallery Guy. So I'm looking for trends, common threads, interesting work and the overall feel of the show I'm going to write about. I walked out of the Armory and was taken aback by the two descriptive words that came to mind: Cute and Funny.

This was by far the tamest Armory show I've seen. Apparently, sales last year were terrible so perhaps that's the reason galleries were playing it safer this time around. Yes, there were edgy and avant-garde works, but very little compared to past fairs. Back to "Cute and Funny" and what I mean by that. There were many works that I'd describe as cute in the traditional sense of pretty, easy on the eyes and mind, pleasing colors, etc. Also cute in the colloquial sense of being slick, a tease, or a pun. When I say slick, I mean that it'll catch your eye, but you quickly slide off because there's not much to grab onto. Like the 3-4' replica of a fancy pearl earring - well crafted and fun to look at, and one could attach social significance to what the piece represents, etc, which is fine. Not being negative about this type of work, I actually enjoy alot of eye-candy artwork! But in the larger context, there seemed to be alot of it rather than work pushing the envelope. This large, round gold piece caught my attention but not enough to dig and get the back story. 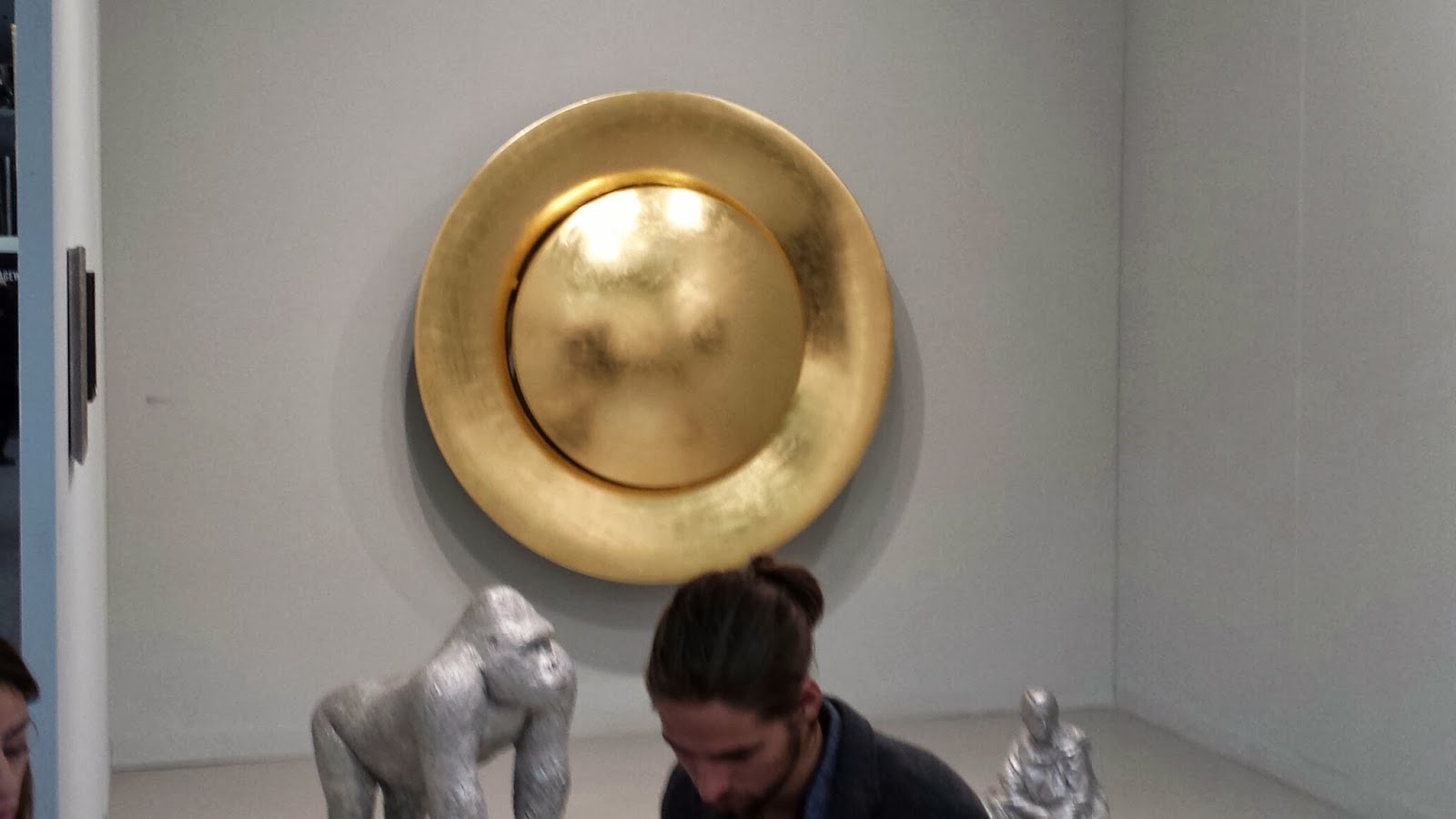 I'm always curious and astounded by a gallery spending thousands of dollars for a booth, just to display a large white canvas, as the Francois Ghebaly Gallery from LA did (below). I get Minimalism and its impact and that some people really dig it. I need to ask a gallery their thought process and why they're showing a black circle or white rectangle at a fair. Hopefully they can illuminate my mind and send that inner Philistine that says, "WTF?" back to its dark recesses. 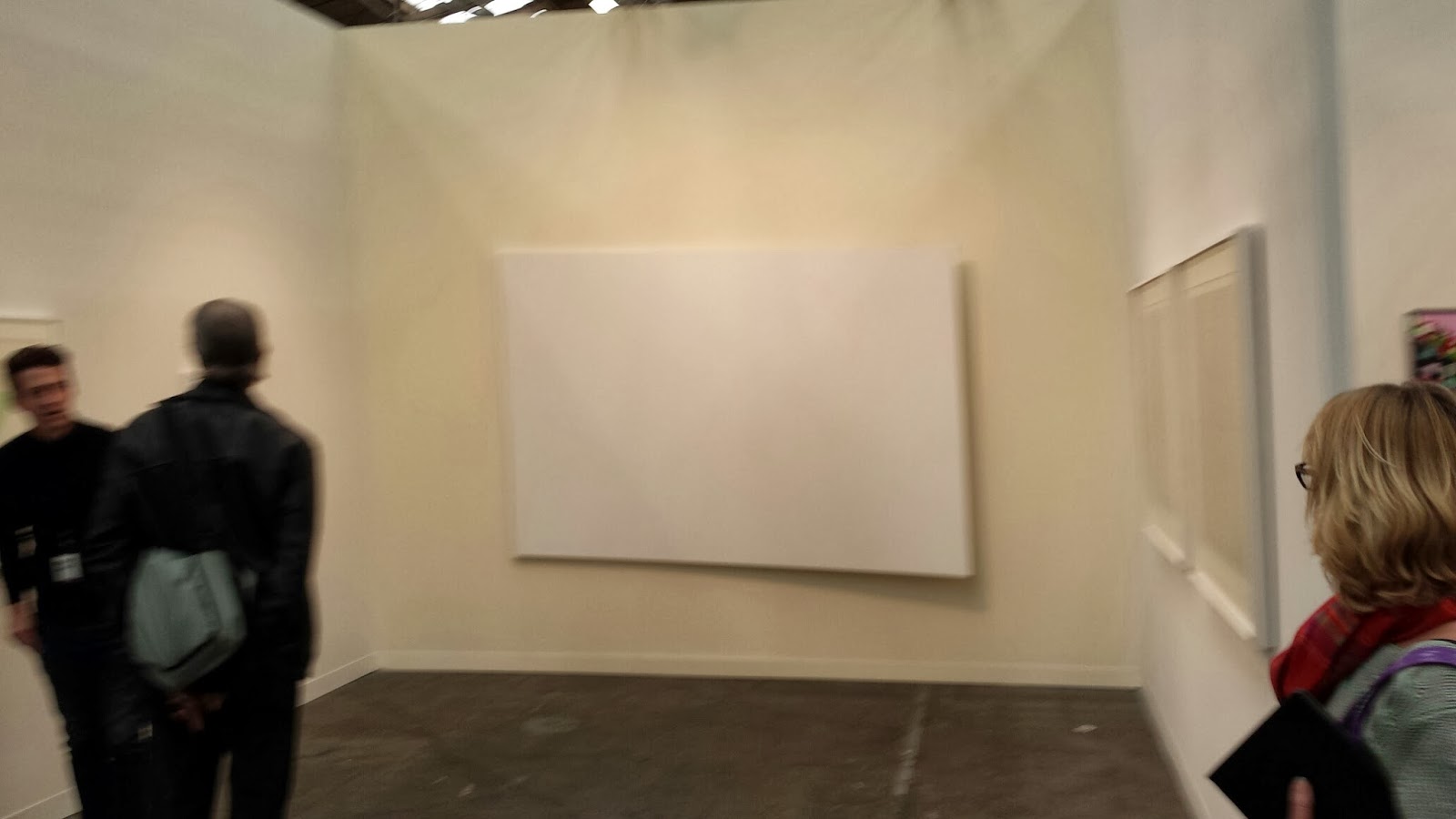 As for Funny, it's pretty straightforward. There were several humorous pieces. Maybe not all intentionally funny, but I found myself and saw several other viewers smiling and giggling quite often. Some were visual jokes, and there were text pieces galore not only at Armory but at all the fairs. This one (left) by John O'Connor titled "Butterfly" at Pierogi Gallery (Brooklyn) incorporated logos into the text and the story it told.
(click to enlarge if you want to read some of the text).


I saw text pieces like "Oh Well," by Mel Bochner at 2 Palms Gallery (NY) above right, and he had text works at other booths as well . Grimm Gallery from Amsterdam had several text pieces using mixed media on its wall (below), and the sculpture, "Untitled-Boogie Woogie," by Charles Avery using a bust and Lego pieces in a nod to the "Broadway Boogie Woogie" graphic pieces by Piet Mondrian in the early 40's. 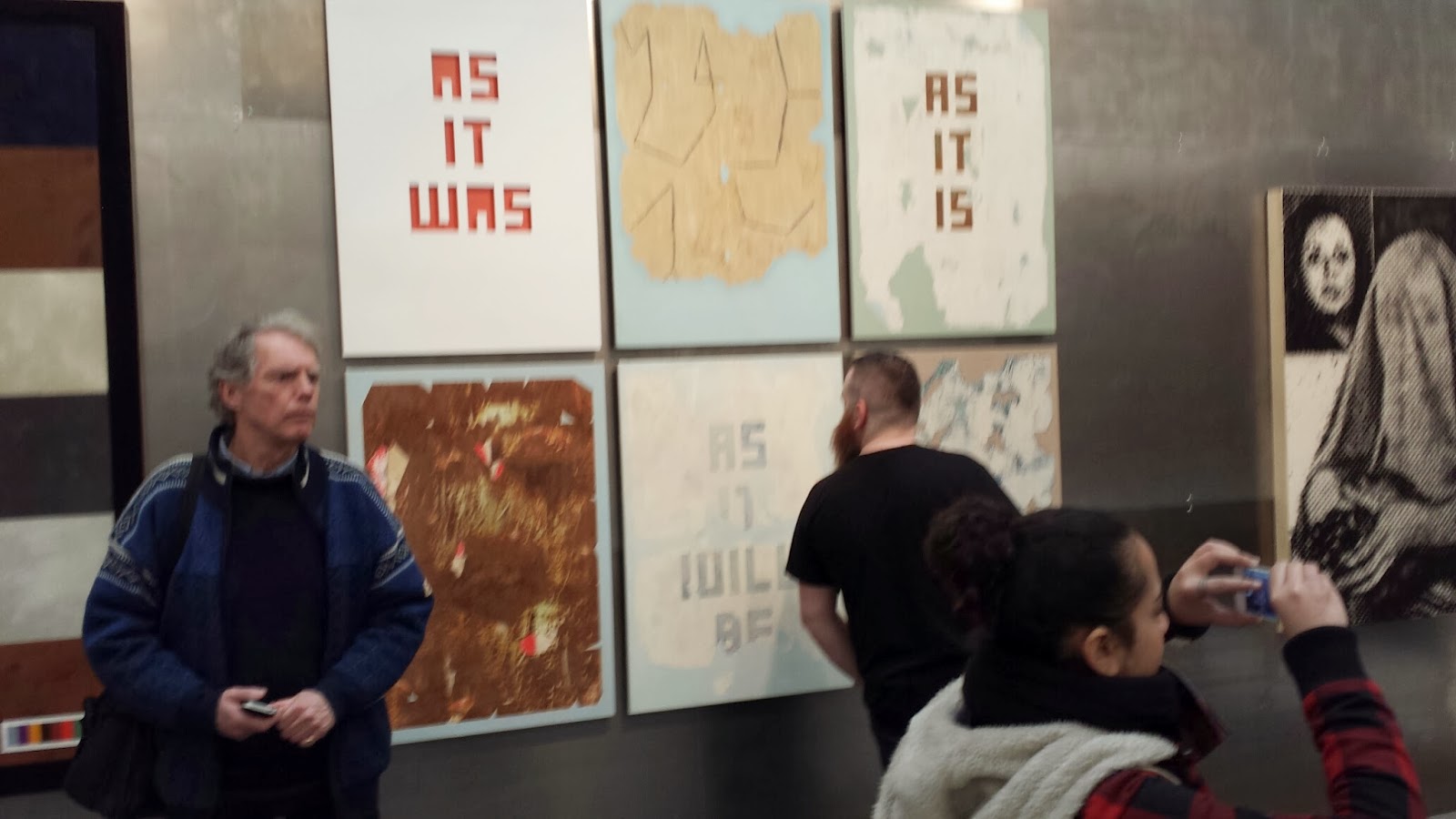 Not all text pieces formed words. This one by Retna at Kohn Gallery of skillfully executed letterforms literally sparkled because, if memory serves, the paint was mixed with diamond dust. My Swiss-trained graphic design teachers instilled an appreciation for such work in me, however, even if you've never touched a ruling pen it's easy to appreciate such a wonderful piece of art that is so intricate and compositionally spot-on.


Since I just mentioned a blue piece, I'll segue to this one by Tomory Dodge at CRG Gallery (NY). A large swirling mass of deconstructed - what? Building pieces in a tornado at first glance, but the "pieces" are brush strokes of thick paint flying through the air at you - a storm? an explosion? the energy from an artist's mind being flung out onto a canvas?

One of the pieces getting alot of press is this one by Michelle Grabner and Brad Killam who are involved in curating the current Whitney Biennial. "Oyster #5" at James Cohan Gallery (NY). 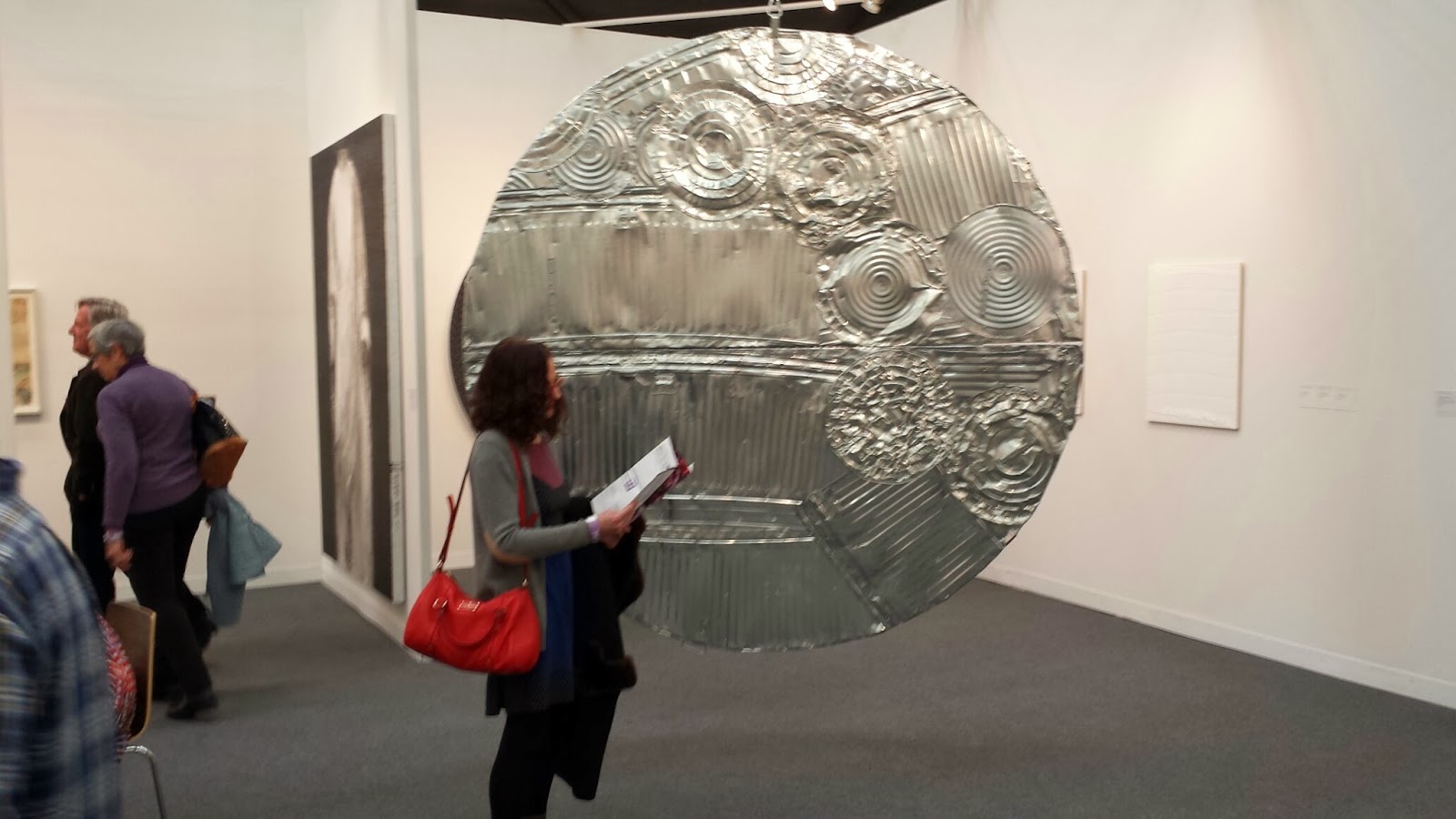 Always interesting to see an original David Wojnarowicz, this piece at PPOW (NY). One of those artists we lost in the 80s AIDS mess. He brought so much energy to his work, one can only wonder what he would've done if his life wasn't cut short so early.


Below are more shots of work from the show. I'm curious what you, dear reader, thought of the Armory if you attended, so please write me or leave comments.


Posted by Joe Borzotta at 5:44 PM No comments: 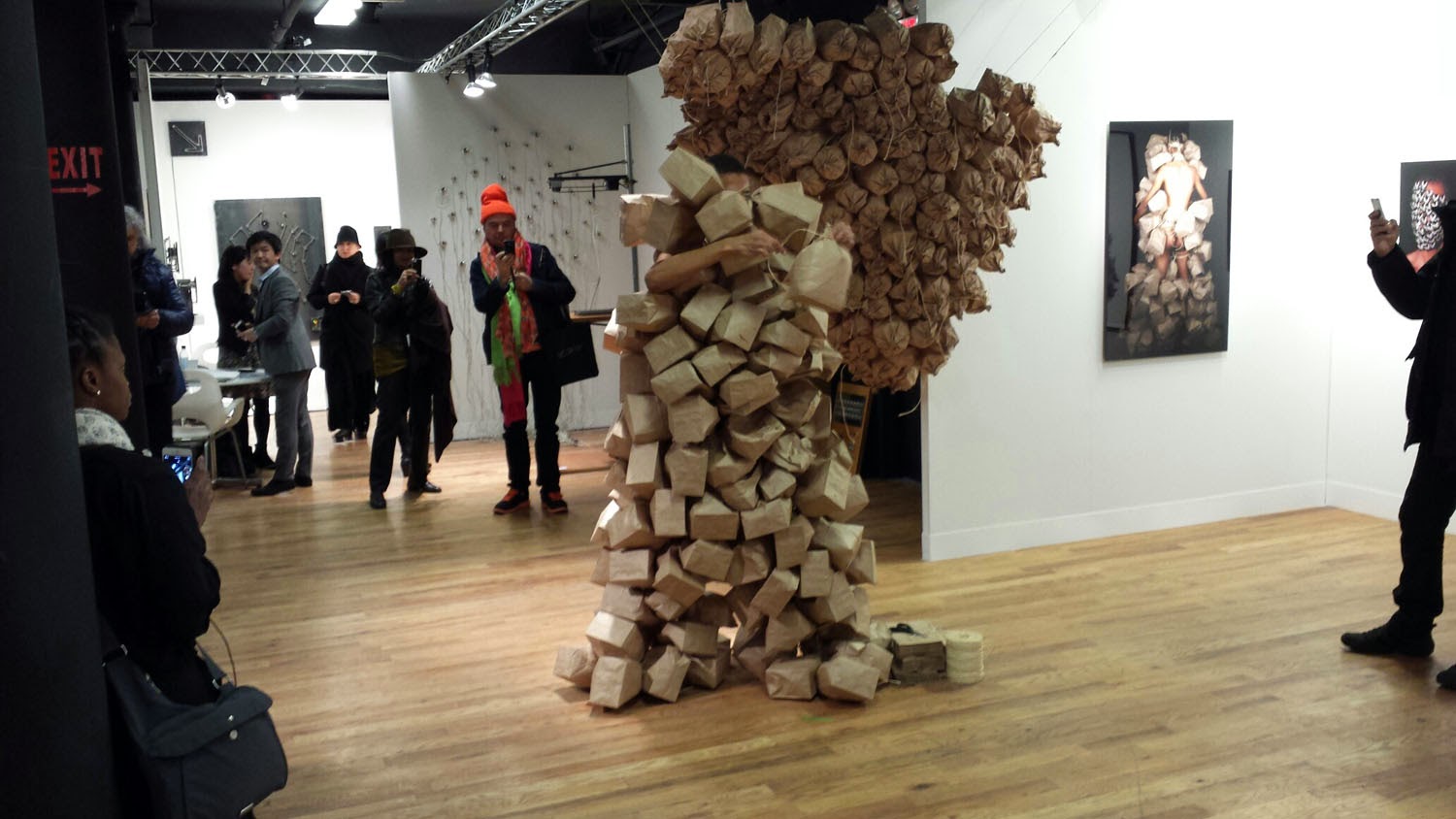 Started off my NY Art Fair travels this year at VOLTA. As I thawed from the frigid outdoors and the last legs of this unending winter, a crowd gathered around a man blowing up paper bags and wrapping himself in a cocoon of them (Wilmer Wilson IV at Connersmith Gallery, DC).

On the lookout for trends, I noticed a few. Painting is alive and well, thank you, and there was quite a bit of thick, impasto applications. Whether it was a round canvas slathered all in black or multiple colors swiped across a portrait, it popped up throughout the fair - - unlike photography of which there was little. Also, Asian artists (and/or artists of Asian descent) were well represented. I have no figures, but my impression was they made up about 40+% of the artists.
Much of the work was representational, there was not alot in the way of abstract or conceptual work. However, the mediums in which work was created was very diverse! If you can get to the art fairs,  VOLTA is a definitely reco.

VOLTA is at 82 Mercer St between Spring and Broome
Note: Click on any image to view larger)


Posted by Joe Borzotta at 4:28 PM No comments: