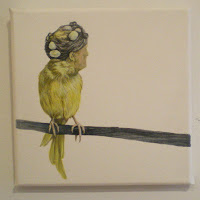 Crazy day running around Brooklyn and Manhattan, but managed to slip into a few galleries. Here's a brief bit about 4 of the lot.

Renewed energy on this strip of galleries on Stanton (Chrystie and Bowery). Went to see the effervescent Johnny Leo, he of the Fountain Art Fair fame, and the group show he has at Lambert Fine Arts. The show is quite a mix - locals and foreign artists doing graf/street, pop surreal, and collage/assemblage. 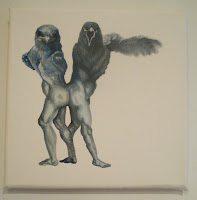 Rachel Meuler's transformational, morphing critter people is a subject visited by artists many times, but her small watercolors on stretched white paper draw you in nonetheless. Curious to see where she goes with them.

Also there were mixed media pieces featuring a male face and text ( left) by Benito. In a similar vein, but more graffitti oriented were three small framed pieces by Terrenceo (below right). He'll be having more work in a show opening here on January 20th, with Shalom Neuman who does colossal sized assemblage robot like creatures. One was in the gallery, an imposing 12-15' tall.

Next door was another group show at
Dacia Gallery of appr 15 artists. Most of the work was representational in a wide array of styles from tight realism to big eyed Keene-inspired paintings of girls. Of note were some detailed graphite on paper drawings by Leah Yerpe. I was told that she does miniature or very large (like several feet long) drawings. There are works by Ms. Yerpe and others in this show on the gallery website that are worth checking out. 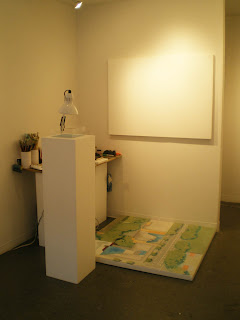 And next door, the Frosch & Portmann Gallery was setting up but let me take a quick look. In the corner was a blank canvas on the wall and artists materials. On the floor was a painting of a satellite photo of the gallery and surrounding neighborhood. Artist Brad Nelson was going to do live painting at the opening standing on the satellite image, which was the spot he was standing on and painting! 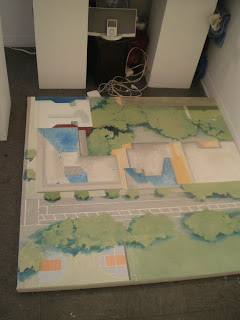 From the funky lower east side to the elite upper east side to see the NY Times reviewed "Grisaille" show at Luxembourg & Dayan. The group show featured work in shades of gray with work from Giacometti to Jeff Koons to John Currin. Below are photos 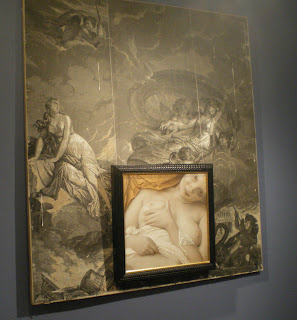 and a detail of the Currin piece ("L'Intimite," hangs on 1815 wallpaper by Joseph Dufour et Cie). Across from his piece were two pieces by Leonor Fini from 1938, "L'Penture"and "L'Architecture." Below is a detail from the former, of the upper body of the figure. 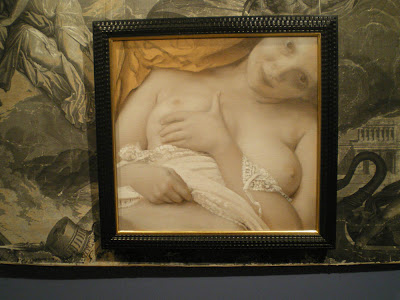 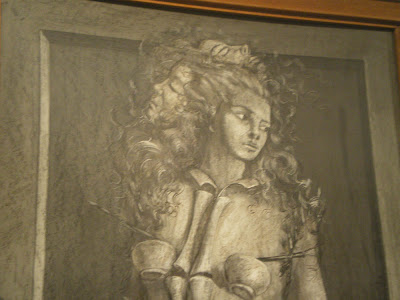 Posted by Joe Borzotta at 2:14 PM No comments: 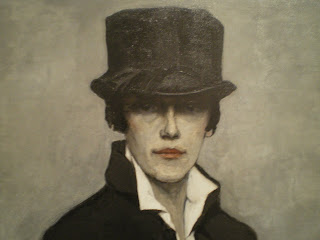 Went to the Brooklyn Museum a few weeks ago to catch the "HIDE/SEEK" show, and also walked through a few other shows including Eva Hesse. To the left is the one photo I got of a painting by Romaine Brooks. Beautiful portraiture, but read recently in a Modigliani bio that she had a hard time getting commissions. Generally portraits are a hard sell unless commissioned, but her pieces here were so good that I've been inspired to learn more about her.
Below are photos and the description of the exhibition (up to Feb 12, 2012):
"The first major museum exhibition to focus on themes of gender and sexuality in modern American portraiture, HIDE/SEEK: Difference and Desire in American Portraiture brings together more than one hundred works in a wide range of media, including paintings, photographs, works on paper, film, and installation art. The exhibition charts the underdocumented role that sexual identity has played in the making of modern art, and highlights the contributions of gay and lesbian artists to American art. Beginning in the late nineteenth century with Thomas Eakins’ Realist paintings, HIDE/SEEK traces the often coded narrative of sexual desire in art produced throughout the early modern period and up to the present. The exhibition features pieces by canonical figures in American art—including George Bellows, Marsden Hartley, Alice Neel, and Berenice Abbott—along with works that openly assert gay and lesbian subjects in modern and contemporary art, by artists such as Jess Collins and Tee Corinne." 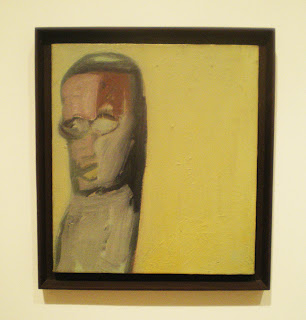 There was a small show of work done by Eva Hesse during a stay in NY. Apparently she was experimenting a bit with her work, and it is exciting to see this process when an artist is loose, letting it flow, and not necessarily thinking about the outcome. The work has an energy and excitement to it, maybe not so much in these photos, but definitely in person. Here are some pieces and a portion of the wall text. 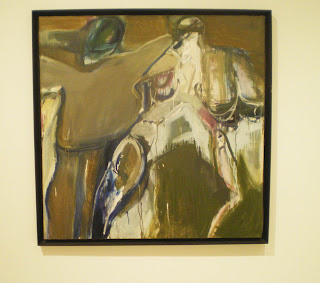 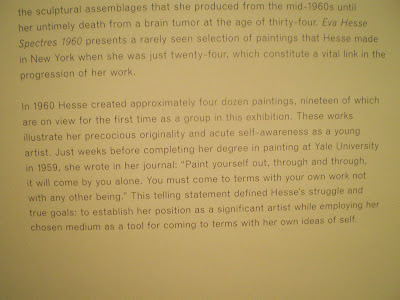 Below the text are miscellaneous shots from the museum including a large painting by Kehinde Wiley from a room full of his work, including chapel-like ceiling pieces. In another part of the museum were these skateboards spread out on the floor and if you look closely, they're covered with Persian rug pieces. A cool commentary on youth cross-culture and amusing play on a magic carpet ride. 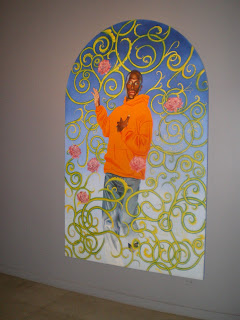 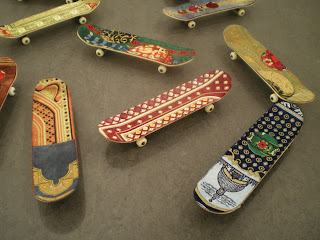 Posted by Joe Borzotta at 3:30 PM No comments: