I shall preface this by noting that Valeri Larko is an old friend, going back to 1990 when we met at an arts group I was starting (at the very first meeting actually) in Hoboken, NJ. Besides being a pal, she's a pretty darn good painter. So, bias duly noted and proclaimed, onto the blog post. 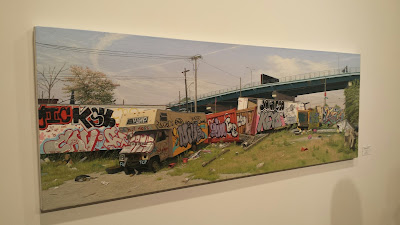 Lyons Wier Gallery in NY has appeared more than once here on The Gallery Guy blog. They show excellent work, almost exclusively realistic painting (or "conceptual realism" as they describe it), and owner Michael Lyons Wier really hustles for his artists, both at the gallery and several art fairs. I've known him for a few years and purchased work there (an awesome Fahamu Pecou painting) so I was thrilled when I heard from Valeri that she would be exhibiting at the space.

This falls into the Better-Late-Than-Never Dept, as The Gallery Guy and la familia were bogged down with the root canal sans anesthetic pleasure of moving, so this post is unfortunately after the show. However, there are plenty of photos here and on the gallery's website. 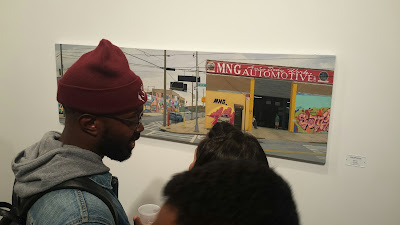 Valeri is a plein air painter and made her bones doing landscapes of old industrial tanks and parks with a high degree of skill depicting the light and  color of those sites. She fearlessly trudges into mostly secluded and dicey locales. "All of my landscapes are painted on location. I spend hours roaming around an area until I find something that resonates with me. Once I do, I set up my easel and return to a site many times. A large painting can take up to two and a half months to complete. The process of painting on location over a long period of time is crucial to my working method because it allows me to form a deeper connection to a particular place through careful observation and personal interaction with the people I meet there." 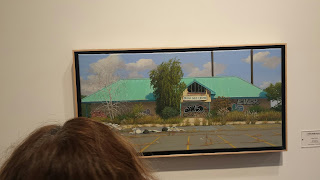 Larko grew up and lived in New Jersey for most of her life and the majority of her early work's sites are in the Garden State. Having moved to New Rochelle, NY, pieces from the last few years were mainly done in Brooklyn, the Bronx, and Queens. Junkyards have been a favored subject presenting a diversity of objects to paint, often festooned with graffiti tags.

Because of the constantly changing environments she paints in, there's a  potential for compositional disaster when working on a single piece for weeks at a time. While painting one site, she arrived to find a large boat deposited in the area she was painting and wasn't sure if it worked in the piece. After a short time, it was covered with graffiti and she ended up adding it to the painting. "Top Dollar" below.

"Urban documentation" work such as this also functions as a time capsule of our changing times. They can capture signage, fonts, language, architecture, and economics. Many sites she's painted are gone, bulldozed and built over or waiting for a developer.
Valeri Larko's work has the added benefits of a good eye, a good hand, focus, perseverance, and a love of her subject matter. When chatting about each other's  work she often referred to her paintings as "my tanks" in an almost maternal tone. That is precisely what sets her work apart from others painting similar subject matter. 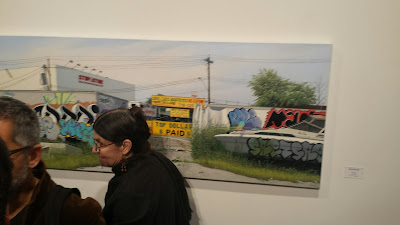 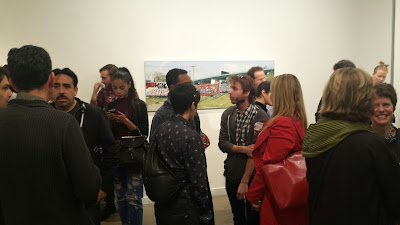 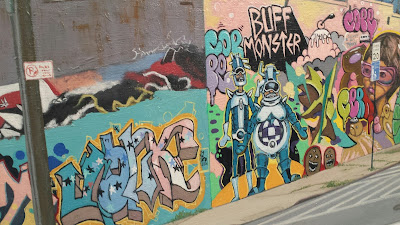 "Location Location Location," new paintings by Valeri Larko was on display in October 2015
at Lyons Wier Gallery, 542 W. 24th Street, NYC.
To view more works from the show go to the gallery's website.

Posted by Joe Borzotta at 10:39 AM No comments: