Balthus review from The Daily Beast

Review of Balthus show with photos via The Daily Beast: 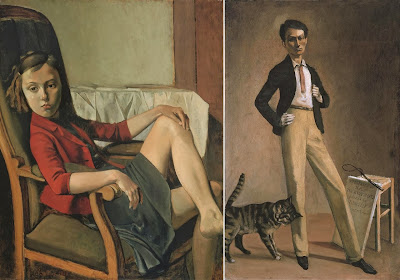 Posted by Joe Borzotta at 8:15 PM No comments:

My interview on Public Voice Salon will be broadcast tonight, Thur 9/12 online at mnn.org, click Watch Now, Community Channel 1 at 5pm eastern. It's a cable show in NY/NJ about culture and politics. Takes place in front of a mural project in Hoboken, best part is in the middle when some jabroni yelled at us to move my truck because he had to get to Sunday lunch. Hope you can watch it, and let me know what you think.
www.mnn.org

Posted by Joe Borzotta at 7:36 AM No comments:

Did a quick hop and a flick in the lower east side. Judith Charles Gallery had a group show, "#PSEUDOreal".  There were a few pieces by Michael Staniak when you first walk in. At first glance they look like a moonscape photo, photoshopped with 60s pop art rock poster color filters. Closer inspection revealed a rough surface, 3D not 2D, and painted, not photoshopped. Cool, nice to get fooled like that! Below are "Untitled 4 and 5", each 18x24", 2200-. 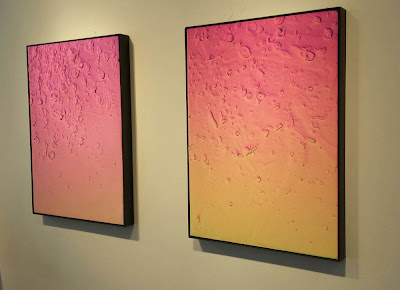 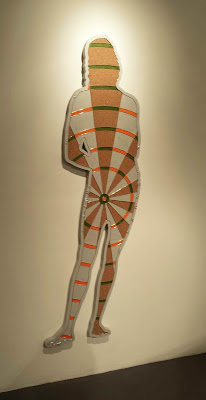 Also in this show was this piece by Trong Nguyen. Roughly life-size cut-out with actual dartboard materials (cork, wire etc) of a person in a seemingly casual snapshot pose. The bullseye falls roughly at the genitals. A riff on the classic St. Sebastian image.

If you didn't know the title and the St Sebastian reference, one could see this in many different ways depending on if you look at it as a women or a man. It then raises questions and discussion points, kudos to Trong.


At The Hole was a show by Kasper Sonne titled "Zero Emotional Content." 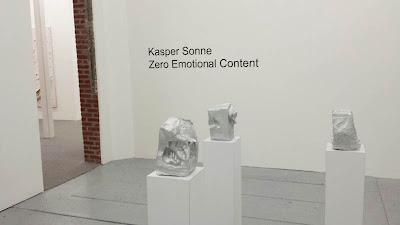 Here on Gallery Guy, I almost never write about shows that I think are "bad" or "weak." I'm not an art critic, and prefer to comment on work that I'm jazzed by in some way. I just found it hard to groove on the title when some of the work, like the canvases that are partially  burned or the "beaten up bodies of clay"  (the silver lumps in the title photo) are anything but. Punched in lumps of clay infer violence, violence is not an emotionless action. Same with the burned pieces (which I found a bit sophomoric anyway). 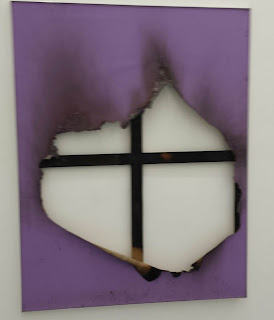 However, I found the work below which is a collage of bit and pieces of scraped paint, chips, etc interesting. As a painter, those bits and pieces are common, especially when sweeping up the studio, and seeing so much of it collaged onto this canvas was a challenging and time consuming act for Sonne. Also reminded me of when I walk down a sidewalk and look at all the bits of life stuck in the  cracks  - the colors, the trash, the leaves, and nature's battle to overcome man's constructions, all visible til a broom or good rain comes along. 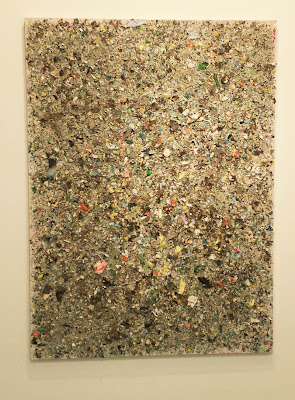 After gallery hopping, I went and caught the documentary, "Cutie and The Boxer," which I highly recommend. Below is the synopsis, courtesy of Rotten Tomatoes:

"Once a rising star in the '70's New York art scene, 80-year-old "boxing" painter Ushio Shinohara is prepping for his latest show, hoping to reinvigorate his career. His wife and de facto assistant, Noriko, seeks her own recognition through her "Cutie" illustrations, which depict their chaotic 40-year marriage. CUTIE AND THE BOXER captures two lives united by a dedication to art-making for a touching meditation on the eternal themes of love and sacrifice."

Posted by Joe Borzotta at 2:40 PM No comments: