Squired the lovely Pamela around town yesterday as her visit to NY winds down, and we went to the Museum of Modern Art where we caught the George Lois show. Lois is one of the most renowned art directors in the history of graphic design, known best for his iconic covers at Esquire in the 60s.

Given complete creative freedom, his covers turned Esquire from near failure to one of the most popular magazines of its time.
Lois also did the "I Want My MTV!!" ad campaign as well as created a new marketing category (gourmet frozen foods) with Lean Cuisine. Taschen is putting out one of their amazing books in the fall which will be a collection of his covers. Show at MoMA is up til May 09.

DAY 3
I started at the Bridge Art Fair, which for me was the most fruitful of all five. Some really good work, lots of interaction with the galleries, and networking. There was quite a bit of representational work here- realism, pop, surrealism, street, cartoon - some excellent and some simply fun eye candy.
Opus One from England had plenty of enthusiasm for its pop and street art inspired artists, among them Hush, Dave White, and Polaroids by sculptor Marc Quinn (of the solid gold Kate Moss statue fame). Hush's collage pieces were another trend I noticed emerging, similar to Greg Gossel's work (Shooting Gallery at Scope Fair). Another gallery showing low brow/pop surrealism was Headbones Gallery from Toronto, which has dubbed this genre "Neopriest" - New Pop Realists Intellectually Engaged in Story Telling. Another off beat take on comics was the "Queer Batman" series at Kathleen Cullen FIne Arts.
Ginocchio Galleria from Mexico had well-crafted pieces by Hugo Lugo, appr 20x30" sheets of watercolor paper with blue lines and shredded edges just like a page ripped from a spiral bound notebook, with doodle type illustrations. McCaig Welles offered more pop with Eric Joyner's fun robots and donuts paintings - yes, robots and donuts. Charlotta Janssen displayed her own paintings inspired by Obama's victory and paying homage to those that paved his way (MLK, Rosa Parks and others) with painterly, limited palette replicas mixing arrest photos, handwriting and vintage images. Brooklyn's Like the Spice Gallery had three pieces by Dean Goelz, known primarily for his anthropomorphic sculptures. Here were appr 11x14" delicate drawings of odd faces with hundreds of tiny dots of paint forming swaying draped figures. Forster-Art from Switzerland had dreamlike paintings by Sergev Leonid and when I said I liked his work, she replied, "Well, why don't you buy one?" Not having 20k on me, I grabbed a card instead.
I ventured over the Westside Highway to what appeared to be a barge which hosted Fountain, the smallest and most funky, loose, old school east village/Brooklyn type of all the fairs.

Leo Kesting Gallery had lots of pop fun from young artists like Casey Porn and her line cut like drawings of critters (right). Curator John Leo has a good eye, and also showed collages by Ray Sell. Mixed media collage frequently has the feel of here's the collage/here's the paint, but Sell manages to blend them seamlessly. He told me that his day job is architecture and the attention to detail and craftsmanship shows in his work.
Shawn Bishop Leo (below),like the aforementioned Greg Gossel and Hush, creates lush and layered pieces with photos, magazine imagery, vintage wallpaper and three dimensional elements. 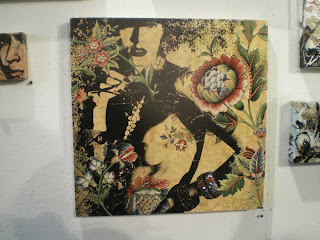 McCaig Welles, also at Bridge, had a large installation, "Donkey Party Game" by Gregory Habenry Yum Yum Factory done in their self-proclaimed “Pre-Apocalyptic Expressionist” style- scattered paintings, collage, and bits and pieces of everyday life. Definition Gallery from Baltimore had more pop surreal work. I met owner Daniel at Red Dot last year but he was at a Phish concert today. Paintings of the Jersey shore by illustrator John Puglisi, paintings by Bethany Marchman (also owner of Rabbit Hole Gallery in Atlanta), and Sylvia Ortiz.
Lastly, I forgot to mention my one purchase - a print by political activist artist Kudzanai Chiurai from Zimbabwe at South Africa's Goodman Gallery. A silkscreen of a shopping cart filled with weapons and below it the words SHOPPING FOR DEMOCRACY.
Posted by Joe Borzotta at 6:09 PM 1 comment: 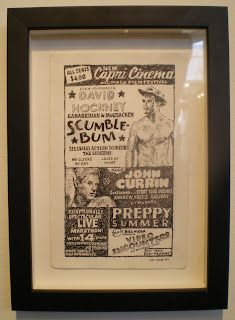 Going to attempt to sift through and make sense of the pile of cards from the 5 art fairs I attended from March 5-7th. The art fairs are basically art gallery trade shows - large spaces in which galleries rent booths and show work. The big boy is The Armory Show, and I also attended Scope, Pulse, Bridge and Fountain.
On Day 1 I hit Scope and Pulse. Jonathan Schorr was showing Wayne Coe's work (which I saw previously at McCaig Welles). He built these retro model kit boxes featuring scenes from Guantanamo and AbuGhraid - Human Pyramid, Guantanamo Guard Dog, etc. Well designed and darkly humorous, sad comments on the CNN-ization of conflict. New pieces were these pencil drawings about 9x12" of old gay x-rated theatre marquees. Wayne told me that a friend of his showed him photos of these and that it reminded him of the "film hyperbole" style of ads in Art Forum hyping hot and/or blue chip artists. So the drawings substitute the porn stars' names with artists names (like John Currin) see pic. Jonathan said that some of these artists were quite pissed and a few were bought to be hidden or destroyed!

The Fernando Pradilla Gallery from Madrid had these large blue Bic pen portraits by Nelly Penaranda (?), in the 3x4' range. Nothing groundbreaking, but scale and execution made these attention grabbers. 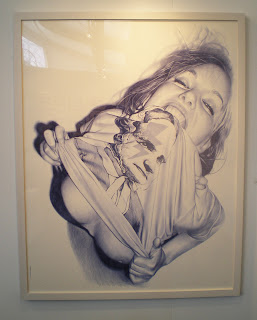 Being that Scope was my first stop, I was pretty jazzed and took more pics here than the other fairs. Here's another one from dFaulken Gallery, figurative paintings by Karim Hamid. Most of the figurative painting at the fairs was traditional studio posing or photo realistic. In general the loose, gestural work looked more unrealized than worked through (except for Hamid's who had some great energy in his pieces). That was a theme for the fairs, especially Armory. So much work was weak in the sense of looking like very early career or even art school levels of exploration into different styles and genres. More on this in the Armory show section. 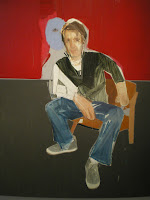 Christopher Cutts Gallery had these child-like portraits of artists by Matias Sanchez which I found audacious and amusing in their simplicity. Part of the reason I liked them is that I imagine these artists would've appreciated the naive style of the paintings. 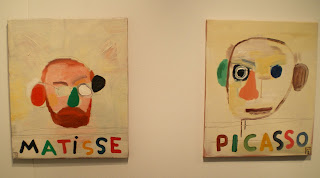 I keep an eye out for trends in art at these fairs and noticed several. For example, there were several large portraits done in mixed media - an Obama portrait made of cereal, faces made up of chamomile flowers, thread spools as well as 2D images composed of shapes or images repeated to create a portrait. There was very little naturalistic photography, most of the photos were digitally manipulated and layered to create surreal images. These fantasy like realms, situations and people were prevalent in not just photography but across several genres - seemed more like the visual influence of video games and high-end CG effects from film rather than a desire for escape. Thickly impasto'd paintings (to the tune of 2-3" thick) were a common sight, oil and turp wafting through the booth. There was a number of Chinese galleries showing paintings of young girls with huge heads and big eyes, a cross between 50s Keene paintings and Japanese anime only loose and painterly. 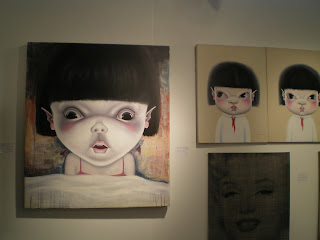 I asked the 798 Gallery about it and Jin Zi's paintings (right) are representative of this. I was told this is indeed a big trend amongst Chinese painters right now. I'm not a fan of these, but they were everywhere.

I hopped the shuttle downtown to the Pulse Art Fair. Pop Surrealism made its presence felt here at galleries like Copro Nason from Cali and Okay Gallery from Austin. The young guy from Okay who was in NY for the first time said, "I had a hundred bucks in my pocket yesterday, and today I have like ten, and I have no idea where it went!" I replied, "Welcome to New York!" There were also galleries showing original works by Robert Crumb and Robert Williams. Stopped at Lyons Weir Ortt Gallery which show alot of tight realism. Last year they showed work by Cayce Zavaglia which blew my mind!
I thought it was a portrait painting until I got closer to see that it was all thread!! Words cannot describe the skill and intricacy of these pieces. She does about two a year, and last year they were going for 14k and now they're 20. Worth every penny. PLEASE go to the gallery website and look at her work. LWO also had paintings by Fahamu Pecou - think Kehinde Wiley (several of his beautiful works at the fairs, too) only in a looser, more hip-hop style. 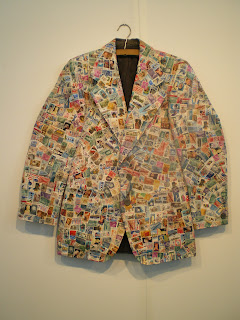 Space Projects from Slovakia had these silly jackets by Otis Laubert, one pictured here covered with stamps (Postman's Coat), one with matches (Fireman's coat, duh). Thought this one was fun.

DAY 2
Onto the Armory Show...
It's the big boy - the most booths, the anchor, whatever. Costs thirty bucks to enter. There are so many people that you can tell it is very exhausting for the exhibitors, making it difficult to engage in conversation about the work. However, if you dress nice and wear a jacket, I discovered that they think you're a collector and come up and start chatting! But seriously, the concensus seems to be that this was by far the worst show of all the fairs, and I agree. I have no pics because I forgot my camera, but there wasnt much that would've motivated me to shoot. An exception was Hope Gangloff's pen and ink drawings of nightlife at Susan Inglett. They appear in the weekly email I get from MyOpenBar.com, or something like that. Also, Kenny Scharff's installation was playful and typical of his style, and had energy and enthusiasm that made it stand out from the (over?)abundance of exhibitors.

The Parisian galleries as a whole were pretty awful. They were showing avant garde and conceptual work, but so much of it was weak and unrealized. Had the feel of a first draft, retreads of old work that the artist was doing as part of their process to explore beyond it but hadnt arrived there yet - so why show it? Germany had many galleries showing similar work (one German gallery told me there are 420 galleries in Berlin!) but it seemed like their work was pushing the envelope more, edgier, trying some things that even though they weren't very successful, were dipping their toes into new pools.

I have my likes and dislikes. But I've learned over the years to look at work in its own context and so on, and I don't like to dwell on the negative. However, it baffles me how a gallery can spend thousands for a booth, airfare, hotel, etc and show such weak work! Want examples? A blurry mirror. 20-30 framed primitive pencil drawings of a penis. A piece of material with a pink oval in the middle (ooooo! it looks like a vagina! oooo! - puh-lease!). Appr 50 (yes 50) framed 11x14" drawings of a pink circle with the words (not exact) "Similar to a color in Jackie O's makeup compact" written in pencil under each one. A canvas painted white. A canvas painted black. Two aluminum(?) bananas.
Next year, I think I'll skip Armory. Pulse and Scope are keepers.
Posted by Joe Borzotta at 10:16 AM No comments: