Chris Lee "R.I.P. SAMO and Other Stories, The Semiotics of Basquiat"

Palette Online ArtSpace presents: "Chris Lee: R.I.P. SAMO and Other Stories, The Semiotics of Basquiat" 6/15-7/7/20 www.palettegallery.net
Christopher Lee, a grad of RI School of Design and currently residing in Jersey City NJ, has created this series of Basquiat (and Warhol) inspired works for this show. Check out the statement on the exhibit page. 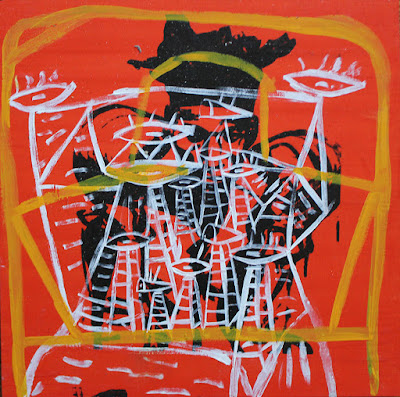 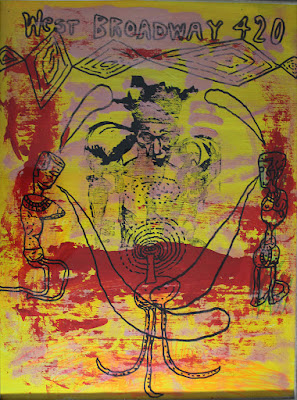 Please note: Palette ArtSpace was my gallery in Asbury Park for 5+ years. I turned the website into an online gallery during covid19 to present 3 week solo exhibits to help artists during this difficult time.  I'm not charging artists any fees or commissions, buyers can reach out directly to the artists.
Posted by Joe Borzotta at 8:38 AM No comments:

Another loss from the art world: Christo

Our last post was about the passing of Susan Rothenberg, today we celebrate the life of Christo.
Below is a link to an article on Artnet about his death. A true original, hard-working and inspirational if for nothing else than the audacity and tenacity it took to get these projects done.

I was fortunate enough to experience one in NY (below w his wife). Below that photo, I mean, the dude WRAPPED AN ISLAND!! Think about it... 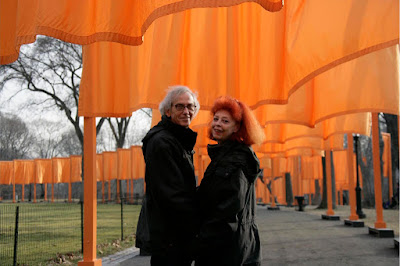 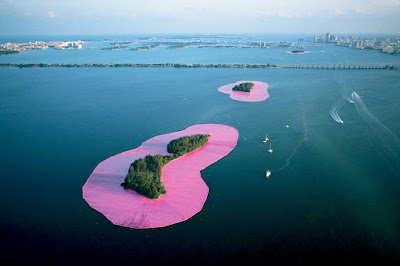 Posted by Joe Borzotta at 7:42 AM No comments:

Just got this email from Sperone Westwater Gallery:
It is with sadness that we announce the passing of artist Susan Rothenberg.

“Since 1987, I have been privileged to show Susan Rothenberg’s work and to experience close up her passion for and commitment to making art. As a pioneer, she extended the boundaries of painting—especially for other women artists,” says Angela Westwater, founding partner of Sperone Westwater.

Rothenberg rose to prominence in 1975 with her first solo exhibition at alternative art space 112 Greene Street. Consisting of three large-scale paintings of horses, it was heralded for introducing imagery into minimalist abstraction and bringing a new sensitivity to figuration. A group of her iconic horse paintings was included in “New Image Painting” at the Whitney in 1978, followed by “Zeitgeist” at the Martin-Gropius-Bau in Berlin in 1982, where she was the only woman included in a group of 45 artists.

Though often associated with this series of work, Rothenberg only painted horses for a short time in her career, and through the 1980s quickly moved on to explore other subjects, including heads, hands and other fragments of the human form, which morphed into a series of figures in motion–dancers, vaulters, spinners and jugglers. Rothenberg lived and worked in New York for nearly 20 years until 1990 when she moved to New Mexico with her husband Bruce Nauman. In this new setting, Rothenberg drew imagery from her daily life and physical surroundings in the New Mexico desert. Here she continued to draw upon her longtime ability to challenge and expand painterly conventions in her distinctive way of organizing pictorial space and her exploration of light, color, form and movement.

On the occasion of her exhibition at Sperone Westwater this past January, Alfred Mac Adam wrote in The Brooklyn Rail: “The only thing we can ask of this great artist is that she never stop working and never abandon the commitment to radical ambiguity that fuels our own creative and imaginative responses to her images.” 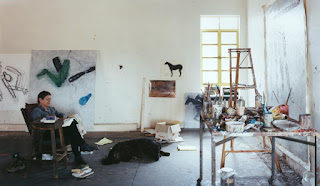 Here is a link to a piece I wrote about her recent NY show:
http://the-gallery-guy.blogspot.com/2020/01/susan-rothenberg-at-sperone-westwater.html

Posted by Joe Borzotta at 7:03 AM No comments:

The website for my former gallery is still up and running, and I've changed it to Palette ONLINE ArtSpace!
I started curating 2 week solo shows beginning April 1, 2020 at no fees to the artist and no commission. Zero. This is in response to the pandemic and people having much more time to look at art and so far the website traffic has been fantastic. I am putting parties interested in purchasing directly in touch w the artist.
First up was painter Lou Carbone, and currently thru April 30th is Tim Daly. Please check out their work at www.palettegallery.net.

You can also leave a message of support for the artist on the Palette ArtSpace Facebook page.
Posted by Joe Borzotta at 7:25 AM No comments:

Renowned NY art dealer Paul Kasmin died. Always a stop for The Gallery Guy on Chelsea visits, his space had an eclectic array of artists. 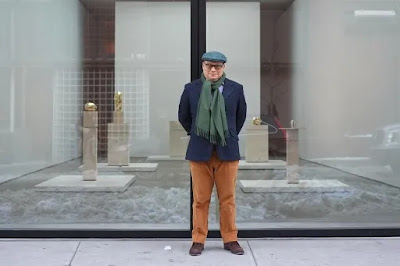 Posted by Joe Borzotta at 6:53 AM No comments:

A look at VOLTA and Spring Break NY Fairs 2020 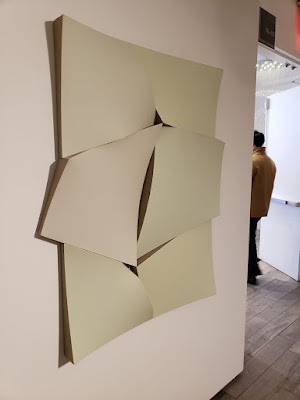 After VOLTA's mega-disaster last year (the pier was deemed structurally unsound) it's back w new owners, director, format and location. A smallish show, plenty of hits and misses, and it broke w solo booths. I didn't take too many photos and what I did was mostly representational paintings as you can see, but abstract was in full effect as well as the Op Art comeback. Plenty of smaller scale conceptual and abstract 2D and 3D works. Jan Maarten Voskuil's pieces at NL=US (Rotterdam) had connected curving canvas pieces, and the subtle colors of the piece below was gorgeous to look at from any angle, hues and values changing w the light and the slopes of the canvas.


A playful collection of paintings by Rinus van Hall at Kyas Art Salon (Amsterdam) were several small self-portrait oils based on those silly face altering apps. Very much a "time-capsule" series. 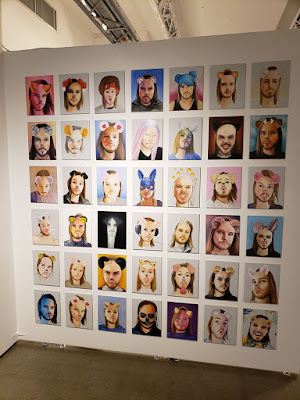 These paintings by Yigal Ozeri at Rutger Brandt's Gallery (also in Amsterdam) captured aspects of New York city life in this day and age as well as any other 20th/21st century paintings of NY (and had the first red dot I saw). They are images that we see daily here - the old women, often Asian, collecting cans and bottles to cash in. The stylish guy walking down the street with headphones in his own world, carrying shopping bags and a work bag. The portrait of the pretty young woman in the fur coat is excellently rendered, and her expression and look invite interpretation. 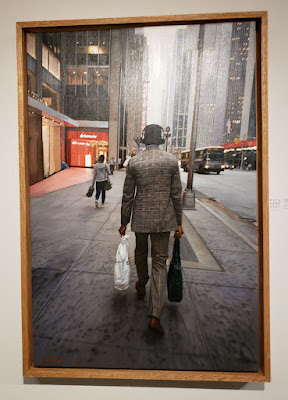 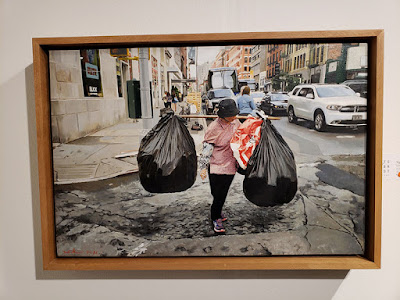 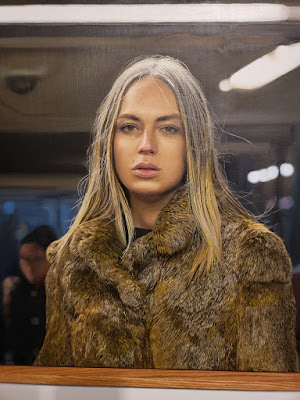 On the other end stylistically were paintings by Ashley Norwood Cooper, which I just saw at the 14-C Hotel show in Jersey City a few weeks ago (see earlier blog post). Zinc Contemporary (Seattle) featured a few of these brightly colored, loosely rendered paintings looking at men, women and children through her eyes as a mom and artist. Undeniably energetic and heartfelt in a way. 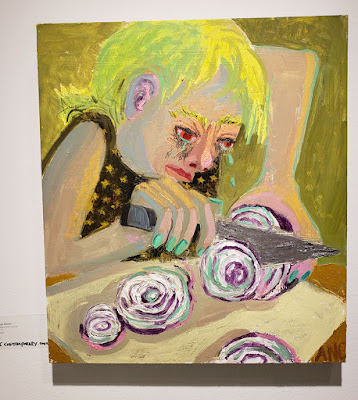 "Equestrian Portrait in Gandiul" by Los Bravu and another piece by same at Lyle O. Reitzel 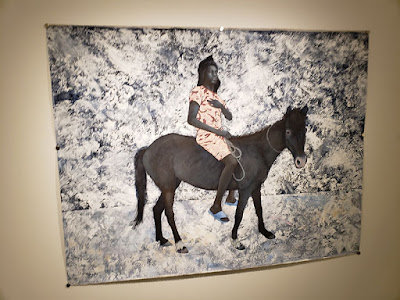 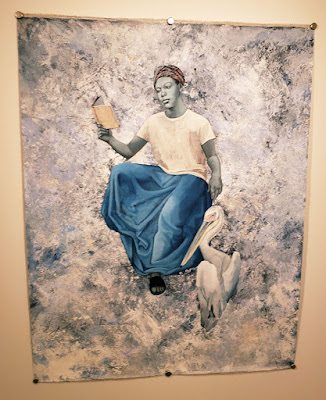 Can't find notes on this one. click on it to enlarge and see details: 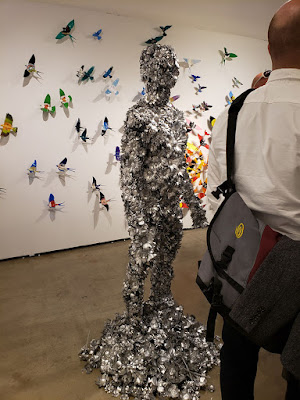 Another piece at the NL=US (Rotterdam) booth, by Javier Murcia. 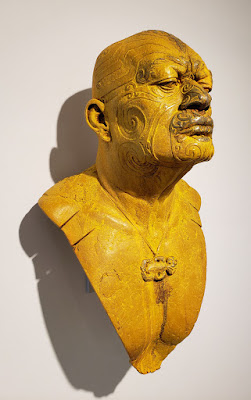 SPRING BREAK
Time was getting sparse for The Gallery Guy but I'm so glad I hit the Spring Break show on Madison Ave! In the old Ralph Lauren offices, with every booth (office space) curated by a dealer, independent curator, by an artist or the artist. It had the feel of the studios back in art school at the end of year with seniors and grad student projects being assembled and sometimes competing for space with all the energy that's involved. Most artists made the room itself part of the exhibit, often spilling into the hall.
I always look for themes or repetition of materials or styles at every art fair and try to tie into the mindset of the world at the time. I noticed a return to Op Art and if not the undulations and trippiness of Op, then there are several works that include many, many thin lines - tape or paint. Sometimes horizontal or vertical, sometimes starbursts, sometimes geo and non-linear. Maybe it represents digital static? or the constant sensory bombardment we live in, in particular from our little life-dominating cell phones?


Other "themes": thread and sewing are still in full effect (often sewing objects together), like:

Lots of recreating an object in another material like giant foam pancakes or these guns by
Natalie Baxter curated by Lauren Wolchik. "Guns Guns Guns" recreates a gun show with soft sculpture guns. Their droopy barrels are an interesting comment on the Freudian phallic aspect of these weapons. 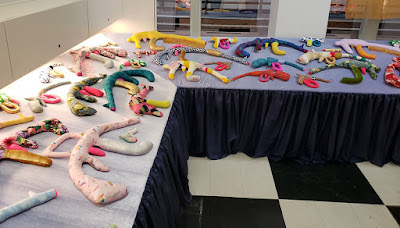 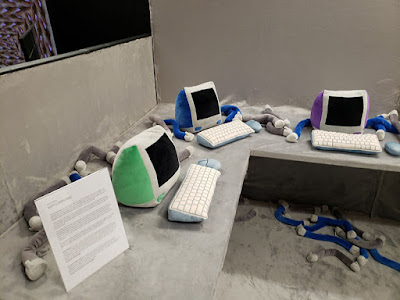 A large installation by Ali Shrago Spechler (who cleverly made her "card" out of cardboard scraps) was made almost entirely out of cardboard. It was a recreation of the type of house her grandparents lived in, a home in 1938 Germany before fleeing the Nazis. She found out her grandma taught at a university (I hope I'm remembering our conversation correctly) and Ms. Spechler contacted people in Germany who either knew her grandmother or were there at the same time, and thus was able to get photos etc to recreate this home. 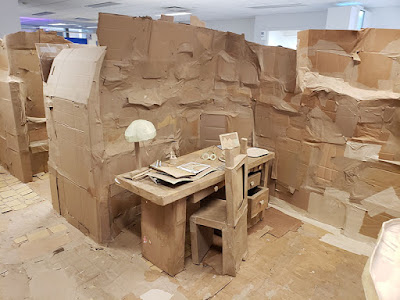 If you've ever had conversations with Holocaust survivors as I have (some of my father's partners were) there's always an underlying sense of impermanence, that fear that everything can be taken away from you. I thought her use of cardboard, a material that reflects transience and disposability, appropriately captures that sense of impermanence by its very essence. 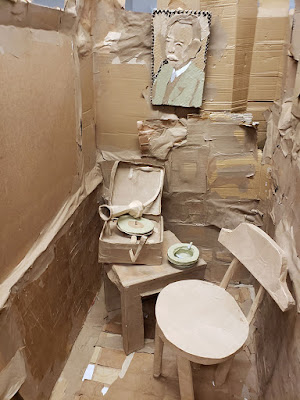 This is David Kramer's "10 Year Plan". Pretty sure I've reviewed this before, but worth re-showing! 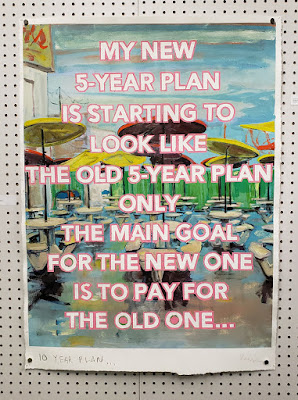 Again, the use of reusing materials - these pieces are made of melted crayons. 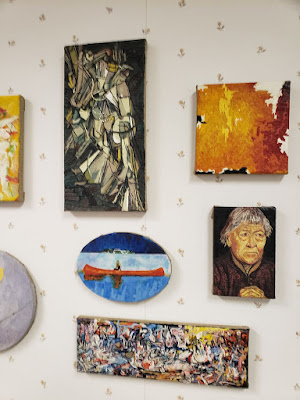 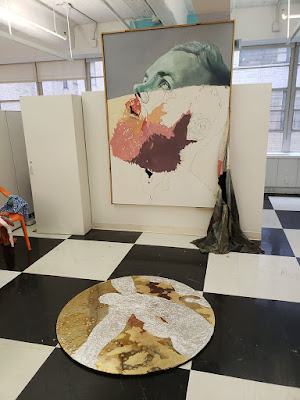 Another large installation, kinetics, light, metal - so much going on in this piece "The Infinity Gyre" by Michael A. Robinson and Sizhu Li, curated by Tansy Xiao. 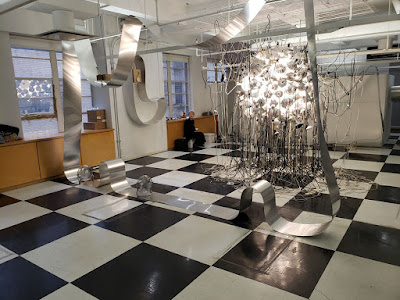 One gripe about Spring Break (and a few other fairs), this to the planners: for fuck's sake, this is New York City in the winter! Set up a coat room! NY'ers and fair goers are usually out for the day and have to carry their gear let alone winter coats and hats. Nothing is worse than schlepping around a coat, my bag, a note pad, booth cards and trying to take notes and pictures while chatting. And sweltering at the same time. Find a room, make some money for coat checks, too, and make your visitors experience much happier! Rant over.

Posted by Joe Borzotta at 12:52 PM No comments: