The front gallery of Mixed Greens is currently dominated by a large branch-like structure sprouting from a nightstand. The clay piece is adorned with flowers, however upon closer inspection there's an odd assortment of other items as well. Are they passing visitors, like the little mouse, or dead/dying remnants like the potato sprouting "eyes" or pea pods? For that matter, what's up with that mouse? A pet? unwanted vermin? or a natural wanderer into this porcelain garden? and what about that potato - amusing and strange. 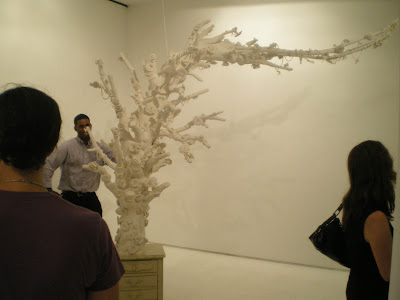 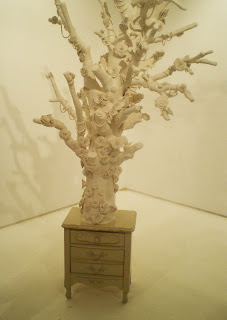 This whole structure and its inhabitants look as if they gazed into the face of Medusa and turned to stone, frozen in time. Alessandra Exposito has mined this terrain before, most notably combining skulls of various animals with fictional narratives in a gorgeous show from a few years ago, also at Mixed Greens. According to the artist, the nightstand is reminiscent of one she had growing up in the 70s. Ever seen a piece of wooden furniture left outdoors for an extended period of time? Nature overtakes, and perhaps this tree sprouting from the nightstand is a metaphor for life moving on, memories getting colored over time, and how we wish that some childhood memories could indeed be frozen in time. Or how they're attached to us whether we want them there or not. 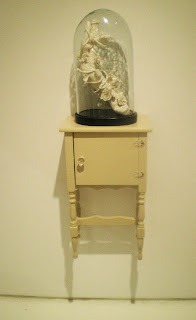 Another similar piece hangs on the wall, only with a much smaller branch and covered with a glass dome. Suspending it on the wall rather than setting it on the floor was a nice touch and gives it an otherworldly quality. On a more formal level, it keeps it from being overpowered by its larger counter-part. From a pop culture perspective, it would fit in with the other floating objects in the opening sequence of Rod Serling's "Twilight Zone."

In some ways these pieces are like a giant cigar box filled with items from someone's youth. While so much work today looks dashed off or made sans dirty hands on a computer, this is no rush job, it's clearly labor intensive, well-planned and engaging for us viewers. Ms. Exposito has a unique gift for combining humor and melancholy with excellent craftsmanship.
Posted by Joe Borzotta at 1:55 PM No comments: