Most artists tend to do more than just one thing. Most do painting but also do collage or cartooning or sculpture. It's not often for a gallery to show the diversity of an artist, to spread their wings a bit rather than "pigeonhole" them. Granted, there are many logical reasons to present an artist in a clear and consistent light. Steven Harvery Fine Art Projects shows a few different sides of the prolific Chuck Bowdish, yet there's connective tissue between these pieces. 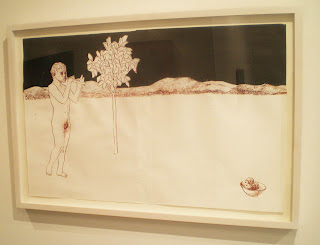 "Best Not To Annoy God" exhibits paintings, watercolors and collages on paper. There's a clear influence of early Picasso figures that can't be denied. Throw in a smidge of Basquiat, a little Henry Darger, a dash of de Chirico, and Bowdish stirs them up to create his own vision. 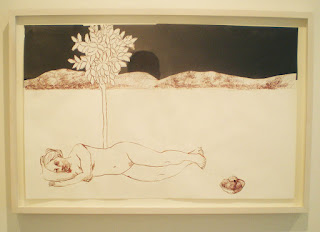 His background as a commercial illustrator serves him well in his graphic sensibilities. It's not easy to commit to large areas of negative space if you don't know how to make it work as he does in the tiny, jewel-like watercolor below or in these two watercolors above. 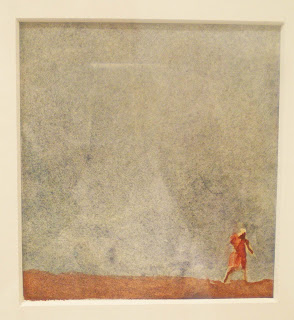 There's a mix of symbolic imagery, historical reference and Bowdish throws in personal references from his dreams with text as well as images. 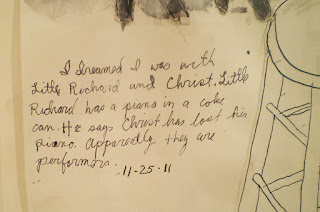 The statement mentions "hazy fragments of memory, exploring themes of innocence, loss, violence and sexuality." Mr. Harvey explained the prolific nature of Bowdish's process, for example coming in with a hundred collages for him to peruse. To his credit, he entertains the possibility of weaving collage,  paintings, and drawings into a cohesive exhibit and does so here.


Another watercolor pays homage to Van Gogh's bedroom painting, though with figures and a bowl of fruit added to the composition, revisioning a still-life into a dreamy, somewhat eerie image. 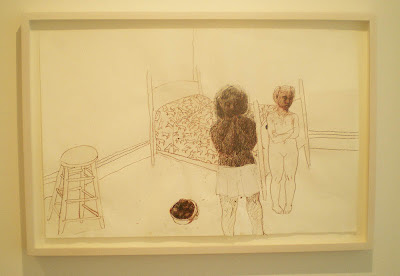 "What I am going to write here is not very pretty but it is the truth." - Chuck Bowdish