One time at a dinner party, the subject of OCD (Obsessive Compulsive Disorder) was raised. Apparently, some psychiatrists believe everyone has a LITTLE bit of this, and the conversation quickly turned into a confessional booth of little tics - one person has to check the oven every time he leaves his apartment, another had to have everything in alphabetical order, etc - - all relatively benign and hidden in these cases. In its extreme, people end up with their lives seriously impacted by their obsessions either mentally and/or in their lifestyle. 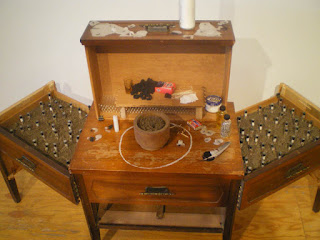 There are artists who incorporate this "style," if you will, into their work. Some use art as an outlet for their issues, others use the theory of obsessive or repetitive motion or imagery in their work. The Shore Institute of Contemporary Art (SICA) has made this the theme of their current show, "Obsessive Compulsive Design." The show presents "art that utilizes an abundance of repeated elements and the associated actions used in the creation process." What I expected going in was alot of repetitive drawing, visual lists, and hoarder type collections. My expectations were far exceeded by the craftsmanship, thought process, and creativity of the work in this show.
By far the star is Asha Ganpat with three sculptural pieces, two pictured here. First is "The Marys," one thousand plaster Virgin Marys cast from a nightlight, tucked under a stairwell in rows. One was cast with a diamond hidden inside, so besides the repetitive casting of Mary, one would think that would trigger an obsessive thought process of "Which one has the diamond??" in a viewer. It's not hard to picture someone buying all of them and obsessively smashing each one to find that single gem. Another piece by Ganpat is "Spells Against Strangers," a reconfigured chest of drawers with items including sand, candles and little vials of hair: "I stole hair from strangers, fallen hair right off their shoulders, bags, and seat headrests while on public transportation. I created (80) monstrous spells against them and display the alter and spells." 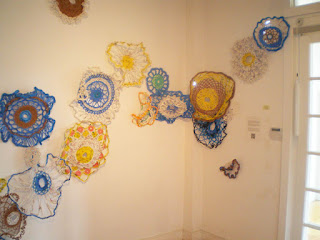 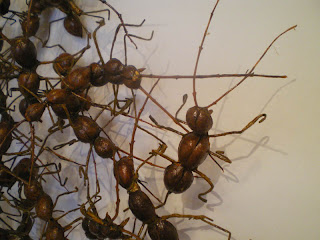 Joanne Schiavone has a wall display of large colorful doilies titled, "Water Doilies." Turns out they are made from plastic bags. The ubiquitous plastic bag is a modern convenience and ecological nightmare in one. Schiavone expresses an affinity for water, and bodies of water are often littered with old bags, so the connection is clear, and executed quite skillfully. 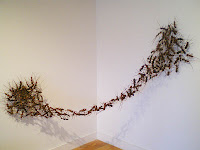 Another amazing example of craftsmanship is "Bridge" by Lisa Murch. Hanging on two walls as they meet in a corner, this piece is a tangle of large ants, dozens of them. It's a marvel of dealing with fragile materials as they are made of seed pods, wire, sticks, shellac and paper. Just the thought of transporting this delicate piece raises anxiety. 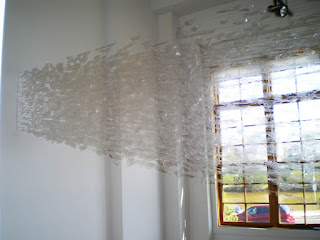 In the back is a room-sized piece by Megan Suttles, the most conceptual piece in the show and a  fine example of an artist creating intriguing art out of very little, packing tape and monofilament to be exact. Lines of filament start from a small grid on the left wall and extend to a much larger scaled up grid on the right wall. On the lines are random pieces of packing tape creating delicate sparkles of light - is this a net? synapses in the brain? The left is dense and the right is not despite it having the same number of points. Does it represent urban life vs rural life? Point is, "Concealed" is wide open to interpretation (I overheard several at the opening and on subsequent visits). Suttles describes it as a "struggle between restraint and disorder" using these "chaotic forms." It completely transforms as it goes from the tight grid to the wide grid. 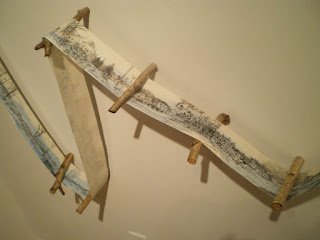 There's a delicate subtlety to Jane Craven Prouix's piece, "Devolution of the Natural Landscape." A long paper scroll with a continuous rendering of a coastal landscape done in ink and watercolor wraps and winds its way through several cut tree branches. The man-made mixes with nature in the drawing as does the piece itself. 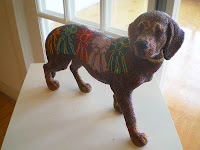 On a lighter note are sculptures by Andrew Pawlan. Objects are intricately (obsessively?) beaded in a way reminiscent of crafty or outsider-art, yet fit seamlessly into the theme here. Left is "Joy."

Not much time is left for this exhibition, so I strongly urge you to try and catch it. Info below. Click on any of the images above to view larger.

Chicken or the egg? When looking at the work of Eric Fischl, which is it that strikes the viewer first: his masterly painting skills or the subject matter? Renowned for his work with light and shadow, color, and brushwork, he has also never shied away from being provocative with his imagery and composition. His early works featured psycho-sexual melodramas of suburban pool and party scenes. The images made the viewer think, "Waitaminnit, what the..." but after the initial "shock," Fischl's painting skills took over or at least had equal weight. Other examples are the controversial Arthur Ashe and 9/11 sculptures, the latter which led to its removal. A few years ago he displayed very large paintings of bull fights (reviewed here) which also tweeked sore points with some viewers. 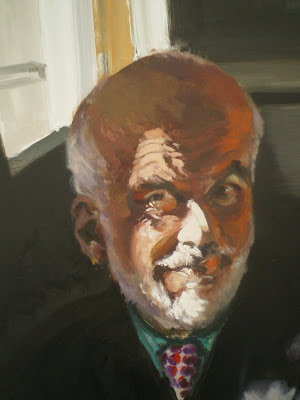 The current show, "Portraits," goes into an odd place. A series of weekend/vacation shots that seem innocuous and relatively tame, until you realize it's Lifetimes of the (Art) Rich and Famous. Models include: the painter Francesco Clemente and his family, Paul Simon and Edie Brickell, model Stephanie Seymour, collector and LA real estate mogul Eli Broad, director Mike Nichols, John McEnroe and his family, artist Chuck Close, writer E. L. Doctorow, Steve Martin...and the artist himself.
On one hand they shout a blasé, smug attitude of "Oh yeah, these are my friends" in an eyes half-closed acknowledging NON-acknowledgement that these are very famous, talented, rich people. Is he saying, "It's no big deal to me, I'm one of them and you're not"? Or is it the opposite, that Fischl is saying, "These ARE famous-talented-rich folks, I am fortunate to share in their GENUINE friendship, and this is my way of showing my affection for them, just like the average shmoe frames a snapshot of a holiday with his amigos. The main difference is, my "snapshots" hang in the Mary Boone Gallery." It's best left for each viewer to decide where Mr. Fischl is coming from. Perhaps it's merely a very talented man congregating with other very talented people. Not so much celebrity portraits as "these are my friends hanging out...they all just happen to be famous, rich, and fabulous."

So much for the subject matter. What really jazzed me about this show was the incredible handling of light and shadow, especially the severe light of a summer's day. Look at this detail (above) of Francesco in "The Clemente Family," 69x86". The warm red orange in the left side of the face in shadow is bold and contrasts with the purple highlights on the right side of the face. The extreme light on the nose captures the intense sunlight. Deft brushwork. This face is a lesson in itself. 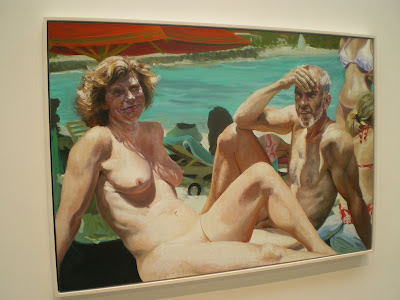 This poolside piece (haven't been able to locate the title) harkens back to early work and is another example of his ability to make dealing with extreme light seem easy. Compositionally, the couple looks right at the viewer but you feel more like part of the crowd, naked, taking a snapshot with your I-Phone rather than the artist painting a pose. 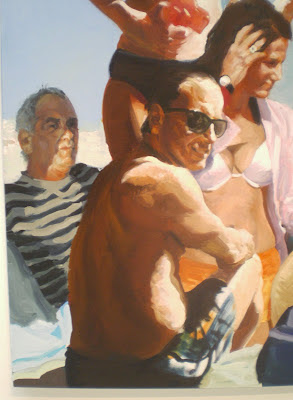 Last is another detail, this from "Untitled," 84x108". A difficult thing for new painters is pushing your darks and pushing your lights. This is another good example of the results of this pushing, accentuated by the twist of the torso as he turns to look at the camera. Probably mid-late afternoon as the sunlight is coming from one side more than above. These pieces are perfect examples of why it is so important for painters to go to galleries and museums to see the originals. The best photo or poster simply cannot fully capture the nuances, the brushstrokes, and the decisions the artist made while painting the piece. If you can put aside the 1% vs 99% aspect of these paintings, there's quite a bit for a visual artist to learn from them.