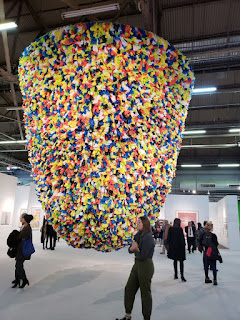 Rallying back from a potentially show-cancelling disaster, the 2019 Armory show was on. Parts of the pier were deemed unstable, so those exhibitors were shuffled over to the nearby Volta show area. Bad news for the Volta exhibitors, but some of them were able to show at Plan B in Chelsea in David Zwirner's and 1969 Gallery spaces. Kudos to them!

Two words that came to mind at the Armory Show for me: "Instagram-y" (a new word?) and "Shapes." Yes, there were the standard blue chip works, some masters, and of course, what art fair would be complete without the big eye candy pieces? Often these works get attention because of that - they're big, or eye candy, or both. You can see this in all the camera snapping, selfies, and media coverage. This piece (right) was of interest (besides being eye candy) because of the timing. Plastic bags are a big issue now, and this piece makes something pretty out of trash - completely made of colorful plastic bags.

There was the big blue sculpture, the 2 big head sculptures, and so on... but I'm sorry, this is just a fucking hot tub on a wall!!

Ahem (he said regaining his composure) and let's not forget the big neon letters piece (below). But getting back to those Two Words. There was alot of work here that I'm describing as "Instagram-y" and by that I mean work that catches your eye/heart/mind, you think, "Cool!" or "Interesting!", snap a photo and onto the next thing. Just like flicking through Instagram. I didn't see as many people pausing and looking and thinking and feeling as much as all the art fairs I've gone to. Granted, the Armory is a huge show and you have to keep moving. Not saying that all the work was slick and not worth pausing to ruminate over, there was quite a bit of solid work to see. Perhaps "look, snap, go" this time around is just a sign of the times. 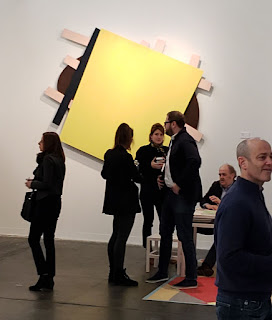 Shapes: for the past few years there has been quite a bit of geo-based work done in sculpture, painting and mixed media. This year there were shapes in several styles and media, too, but looser, simpler, more gestural. Many abstract works had large loosely painted basic shapes, especially circles, in their composition. I saw several glossy 3D shapes replicating paint swatches in plastic or similar materials. Photos seemed to focus on large shapes, too. 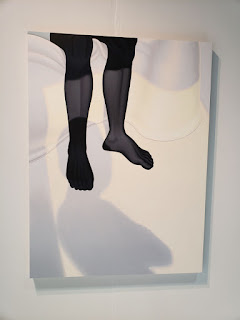 A standout for me was Alex Gardner's work at The Hole NYC. Many black artists have taken up the style of painting skin in blue black rather than brown tones. Gardner's paintings contrast the dark skinned figures in white clothes with off-white sheets,walls, and shadow. The booth was elegant and simple, and his work looked fantastic.

My big smile moment was at Pierogi Gallery with an installation by Brian Dewan. He replicated a classroom like ones from my youth with a film strip projector and screen. They used to project the image from a film loop while a record (yes, a vinyl album) on a record player narrated the image. There was a beep signalling the teacher to move to the next image on the film strip. This was all pre-video and DVD, and we loved it. Dewan also created the images and the film strip that he (proxy for a teacher) showed. Totally fun installation, especially if you're in my age range. 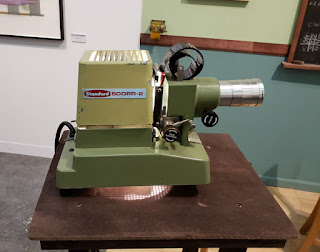 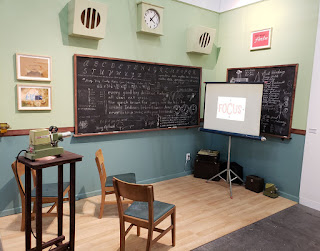 All in all, a standard Armory show, with a bit of everything for everyone's tastes. Just search NY Armory Fair 2019 online for more images and reviews, there's plenty of both. 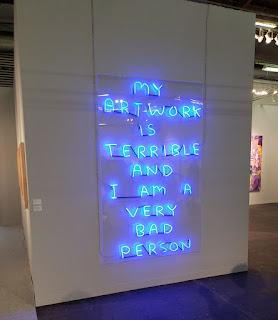