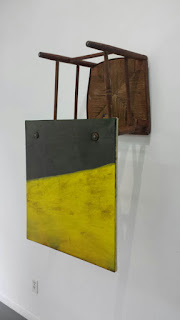 Been awhile since I hit my old stomping grounds in NYC's lower east side. Did the obligatory lunch at Katz's and stopped by the bar I used to own (12" DJ Bar) on Essex, now in it's 4th incarnation since selling it. It's not just that place, the whole lower east side is changing rapidly. Alot of it started when the New Museum took residence there around 2005ish, and a slew of new galleries, relocated galleries, and satellite galleries are filling the area along with bars and restaurants, but thankfully the fashion boutiques have yet to take root. But I digress, these changes are for another blog this one is about a brief afternoon of gallery hoppin' and let me tell ya, I barely scratched the surface! I visited Dutton/Mulherin, Louis B James, Pierogi, Callicoon Fine Arts, James Fuentes, Freight & Volume, Castor, Denny, Equity, Rachel Uffner, and a few others.

Lots of abstract work, but most of it had just a hint of freshness is the best way I can put it. Whether it's palette, presentation, application or media, it didn't feel repetitive or stale. Sometimes it was the introduction of an unusual element that took it out of pure abstraction, like small round pieces of smooth glass added to the paint (like at Samuel Jablon's cool show at Freight & Volume)? glazed over bits of collage? Or like in Matthew Fischer's found object constructions/paintings at Louis B James in which he takes assembling found objects to a different place in how they're built?  Below is a closeup of one piece in which there's a box with a bird's nest and book inside - nature, culture, daylight. 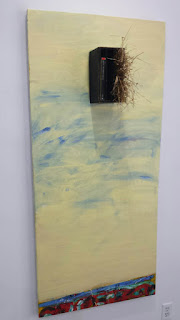 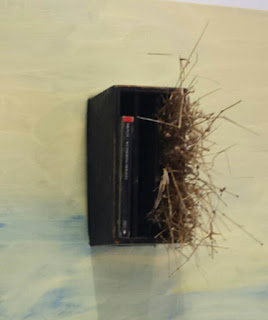 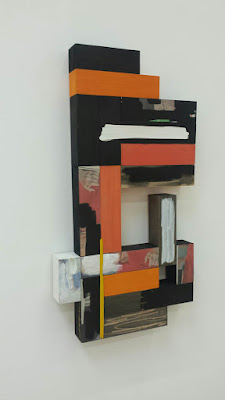 Strauss Bourque-LaFrance (how's that for a name?) at Rachel Uffner had a series called "post paintings", also about collage and assemblage. 2x2" pieces of basswood are piled and assembled into unique wall hanging constructions, covered in paint and some pieces are collaged with images from the NY Post. But he doesn't clobber you over the head with the newspaper, it's subtle (from a not very subtle newspaper). 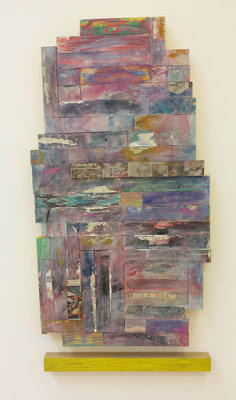 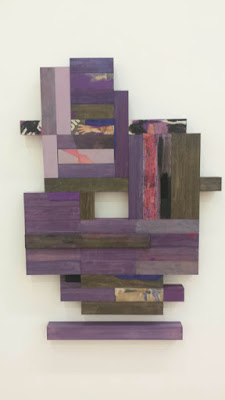 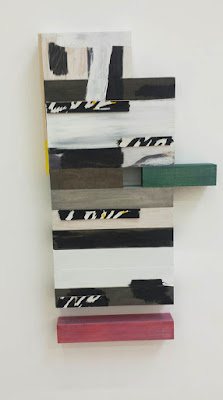 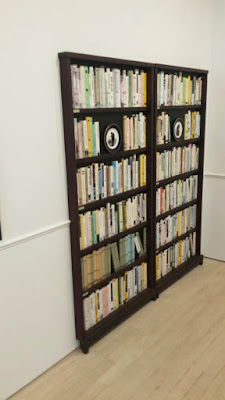 Pierogi, formerly of Brooklyn, and I guess they dropped the 2000 from their name, had a unique take on something done by several artists - book spines and book cases. Often they're trompe l'oeill paintings of someone's book collection, or a loosely done version of the same in various mediums. In this case (pun intended) Ward Shelley builds actual shallow book cases, maybe 2" think, with strips of wood inside as the books and spines with meticulously replicated typography. Tossed in are small cameos and dishes. I've seen the book spine and book cover theme done many times, but never like this. 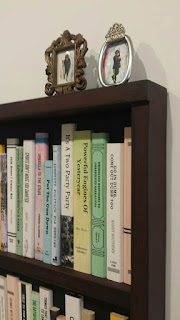 LES is the new Chelsea? It definitely has a vigor and freshness and the small storefront galleries remind one of SoHo and East Village galleries from "back in the day." Print out a map, get down here soon, and allow yourself plenty of time because there's plenty to see.
Posted by Joe Borzotta at 8:53 AM