I prefer not to use this blog for politics, but this does have some relevance in terms of art. 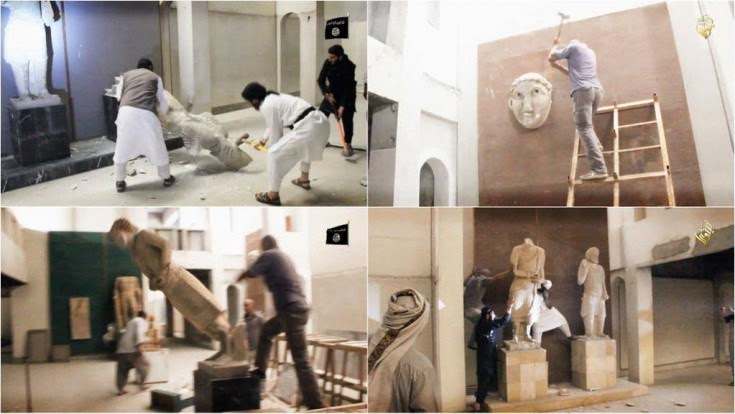 Watching Isis destroy all that ancient art made me queasy. Granted, it pales in comparison to beheading videos (which I haven't watched) but as an artist it really hit home. Destroying a statue because it was worshipped in 700 BC?? Seriously?! I'm not going to offer my thoughts on political/military options, but more needs to be done. And this is not US bashing, but at some point we also have to step back and objectively look at the big picture as to ALL the reasons movements like Isis are growing. The "they hate freedom" and "they're jealous" arguments are too simplistic and kinda naive. When fighting disease, researchers look at all the possible causes, not just the symptoms, to find a cure.

Who wants to send more kids to that hellhole to fight these jabronis? But I'm afraid that at some point, if we want to rid the world of them, it's going to mean boots on the ground going in before they blow up a mall, or the Met, or the Louvre, or Times Square, etc.

I've had conversations w/ conservative friends, liberal friends, a cousin who is a military historian, and so on - a pretty wide range of chats and readings. Most feel that a coalition of overwhelming force should go in, and "wipe them out" before it gets much worse. Others see it as a mid-east issue, it's on their door step so they should handle it ala Jordan and Egypt. And so on and so on, many different views and opinions.

Sorry to ramble on, but watching their glee as they destroyed art and the idiotic speech afterwards to justify their actions was sickening.