The annual Jersey City Studio Tour is a swell event. Lots of enthusiasm, events, venues, and a buffet of styles (and quality) in a sprawling city with Wall Street edifices on the Hudson and creeping gentrification. Still, JC has its shady areas, hipster artsy folk, and pioneers who were there way before Starbucks.
The Mrs., the boy and I did a quick run to a few spots in downtown and saw a fantastic show at Panepinto Galleries. "Lucid Visions" was curated by Diana Corvelle, Cara DeAngelis and Tun Myaing and features work by 23 NY Academy of Art alumni. The show features 32 pieces, mostly painting, as well as sculpture and drawings. Coming off the elevator one is greeted by a large oil portrait (84" x96"), "Jun," by Yun Sung Jang, an expressionless face staring right at each visitor. Mr. Jang also has a diminutive by comparison portrait (below) at 8"x11" inside the gallery.

Dreams and dreaming, not uncommon terrain in art, are central to the concept of this exhibit. "Lucid dreaming" is is a skill  in which a person can navigate or control the direction of their dream state. I'm friends with a medium from El Salvador who explained this technique to me years ago. Basically, by getting into a meditative/trance-like state and quieting one's mind, you begin to enter the dream state and with the right teacher and lots of practice, can begin to manipulate things. For example, if you're walking in the dream, you can control which direction you go, etc. These works attempt to "shift perception of what should be called a 'real' experience." 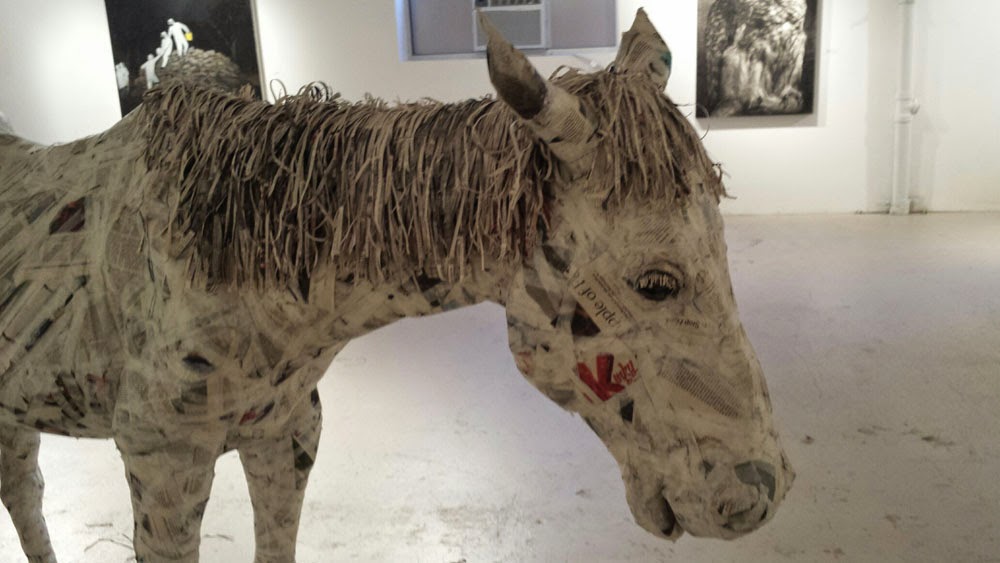 In the center is a large sculpture of a horse by Will Kurtz, mixed media and newspaper. Saw a few fullscale horses at past art fairs and this charming nag (young? old? skinny? ill?) is covered with newspapers and headlines. The hay, mane, tail and eyelashes are made of shredded newspaper.


An owl must be included in any show about dreams, and below is Tyler Vouros' "Barred Owl."


Shangkai Kevin Yu's "A Winter Indoor" is oddly compelling and fitting for this show. A pretty simple image, but does a great job of getting the viewer to pause with a, "Wait, what??"


"The Herd" by Angela Gram is a beautifully rendered and oddly composed painting of nude
bodies and ibix-like horned critters.

From tight realism to a more chaotic, very loose style is Samuel Evensen's "Audience to a Birth", a rush of snippets of imagery - a nightmare? a substance fueled dream state?