Painting night scenes is a difficult endeavor. Most think of Edward Hopper's "Nighthawks" or Van Gogh's "Starry Starry night." There's a social commentary to Nighthawks and a whimsy to S-S-Night, but Brett Amory's night paintings are all gritty realism. Sparsely populated (usually only one person) we ponder who these people are wandering around in the wee small hours, what their station in life is, why they're out, or why they're sitting/standing there alone. If you live in a city, especially New York, you know exactly what I mean. In "the city that never sleeps" many streets and businesses are as active at 4am as they are at 4pm. As a former bar owner, I can attest to this. Walking home at 4:30 or 5am I'd ponder: are these folks bar hoppers making their way home? are they just starting their job? just coming home from their job? homeless? or are they just night owls?
There's the harsh artificial light from signs, bodegas, or newstands piercing the dark. Amory's people are non-descript. Shadow people who could be up to no good or upright citizens.


All of his paintings are subtitled "Waiting" and frequently there are people who look to be, well, waiting. The scenes are relatively still and as you look you're also waiting for something to happen or wondering what just happened. In "Cyclone" it's a sunny 8-9am in front of the iconic Coney Island ride. Others could be night or day at an underground 24 hour business like a subway newsstand, and the viewer has no idea of the time without looking at the title. Speaking of which, Amory has created a newstand, a 3D version of his paintings if you will, complete with a rack full of painted over National Geographics.


Amory breaks the flat plane of painting in other pieces by adding objects and sometimes sound. A Chinatown shop has a radio next to it tuned to an Asian station.  (The late) "Bleecker Bob's 9-10pm (Waiting #173)" record store has a 7" single mounted on the wall by its side. In front of his works are pedestals displaying objects he found in front of the places he's painted (below). These give it an archaeological aspect, they're objects from a specific time and place that could identify the time and place of the painting above them. 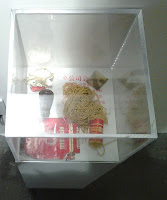 Here's a blurb from the show's statement about "Twenty-Four in New York":
Following his 2012 exhibition Twenty-Four in San Francisco, Amory spent a month in New York City, researching, photographing and filming various locations throughout the five boroughs to serve as reference material for his new series Twenty-Four in New York. The artist filmed a total of 40 locations, each in a one-hour increment at different times of day and night. Video footage of 24 locations will be projected in a grid of 24 frames in consecutive order beginning and ending with midnight. The hour-long intervals will run simultaneously, representing a full day in the city of New York.

There are many striking things about Amory's work that make it not just documentary pieces. These are definitely paintings - he uses broad strokes, color, leaves out details, picks and chooses elements and people to create something new from what he sees. His use of light and dark is haunting and moody. Actually, they create many moods - sadness, fear, joy, apprehension, and melancholy to name a few. I want to know what's going on, where it is and who these people are. He lets me fill in the blanks. He makes me want to look at them over and over. He makes me want one in my home! By the way, all but two were sold before the opening. - Joseph Borzotta