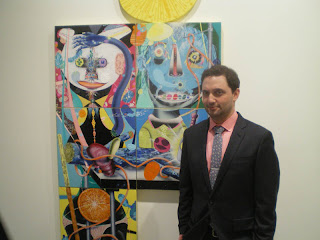 From Vermont to Philadelphia to New York City at 540 W 28th Street, and now to a ground floor space in the same building. The Joshua Liner Gallery has a new home with plenty of windows and visibility.

The premiere show at the new joint was a group show of heavy hitters. Maybe not as heavy as the three or four giant security guards (there for cred more than guarding) but plenty o' big names from the pop surreal/street (does anyone use the term "low brow" anymore? I hope not) scene. Full list of artists at end of this post.

From the always eye-catching, outsider-ish antics of the Clayton Bros. to the tightly rendered (Tiffany Bozic) to street paste-ups (SWOON) and plenty in between. A good show to catch for a solid look at the aforementioned genre(s).  I've raved about Kris Kuksi here a few times, and he has an amazing construction in the show as well.

PS: Shawn Barber gained notoriety with his painterly portraits of tattoo'd people and body parts. Classically inspired with a street edge, these dark and moody portraits are time capsules documenting this age of tattoo frenzy like Fragonard's Rococo paintings documenting French hedonism. This particular painting marks not a departure but possibly a new step in his evolution as a painter. In this piece unlike previous ones, the abstracted figures are the stars here, not the tattoos. A layering of one figure? two? a menage a trois? If so, maybe he's been looking at Rococo work, too! Look at his earlier works, then come back and take some time with this one.