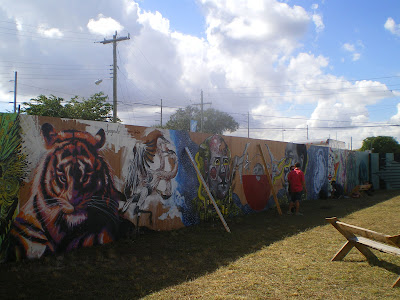 Having written about FOUNTAIN for years here, I've been able to watch its growth from a small show to the tugboat to the Armory, and finally its Miami incarnation. The location here fits the DIY/indie feel of Fountain, starting with the large outdoor, murals, some finished and some in progress. There were many familiar vendors as well as a large contingent of Japanese galleries inside. 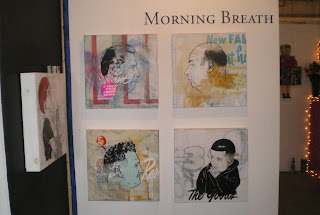 McCaig Welles Gallery was back with the Morning Breath guys and their oft-amusing mix of text and line art. Some might be inclined to dismiss these works (24x24") as one-trick ponies, but that would be a disservice. The faces, though cartoony and retro, show character and expression. In a bizarre way, they remind me of DaVinci's sketches of odd looking citizens that are caricatures yet unique and reflect something of the individual. 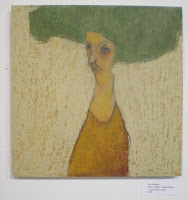 Another quirky little face by Ann Okudaira (right)
at Gallery Den from Germany.

Gallery 4 from Pittsburgh had paintings by Ryan Case MacKeen which stood out due to their unique take on city images. They capture that effect bright daylight has on photographs and our own eyes, blurring the edges in an over-exposed, posterized way. At first glance they appear to be huge enlargements of photos, but they're paintings. And like almost every artist at Fountain, he has a street/graf background. 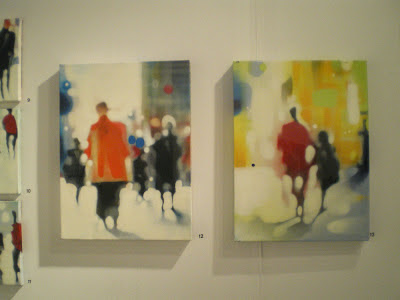 One of my favorite new discoveries on this Miami trip was the work of Michael Sanzone, displaying wood constructions at Kathryn Miriam Contemporary Gallery. This box piece is full of individual wood panels that spin around and are adorned with drawings, sketches, collage and text. Sanzone's father was a carpenter and he learned the craft from him. This beautiful box is made of Spanish mahogany. Well crafted,  thought provoking, and attention grabbing. 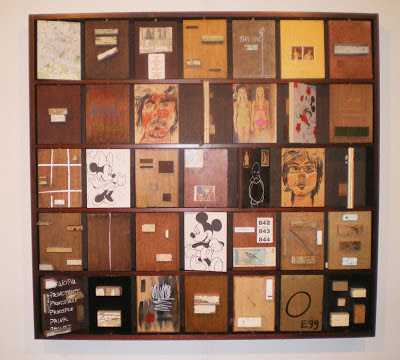 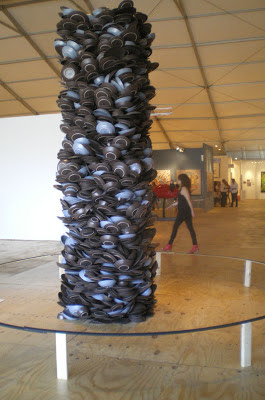 One thing about the Miami fairs as compared to NYC is the distance between some of the exhibits. On this day I went to Pulse in the a.m., then Fountain and I really needed a break, but to go back to the hotel and back to Scope would've been $50-60 in cab rides. So I sucked it up, and by time I got here I had a bit of art overload, however, there was some exciting work and despite my lack of photos it was another great show.
The lobby had some large scale installations including this construction, about 15+ feet of bowls and dishes on a glass table. I like how it forced engagement, you couldnt help but feel antsy walking near it, or walking past and expecting to hear a loud crash. 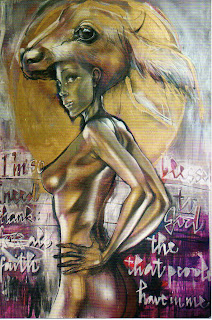 941 Geary Gallery/Shooting Gallery (San Fran) had large works by Herakut, a German street art based couple. Their work is based on contrasts such as street/fine art, east/west, masculine/feminine, etc.

My compadres from Asbury Park, Parlor Gallery, had their first Miami booth at Scope and a featured piece was this painted swordfish sculpture by Porkchop. (Below) 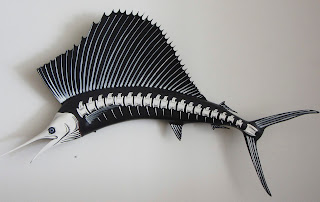 Spoke Art,  from San Francisco, had a colorful booth with these assemblage sculptures by Scott Hove. A take-off of hunter's mounted head trophies, and morphing them with decorative cakes. He cleverly applies the faux frosting with baker's decorative tools. A really fun display with great craftsmanship. 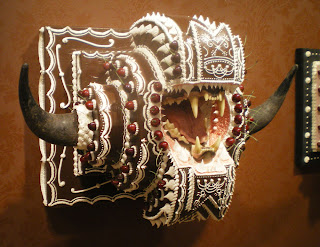 Yet another SanFran gallery, Corey Helford, had works by Chloe Early from London. Her paintings have that 70s movie poster/TV Guide cover collaging of elements mixed with action, painterly brushstrokes and drips, with a modern/street touch. Very engaging works with something for everyone, she just had a near sell-out show last month at the gallery. 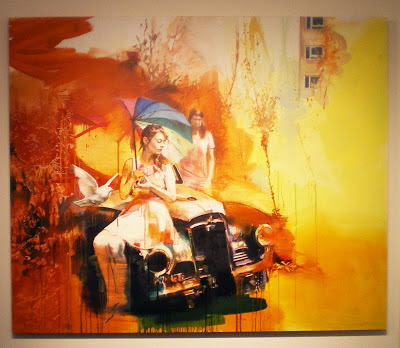 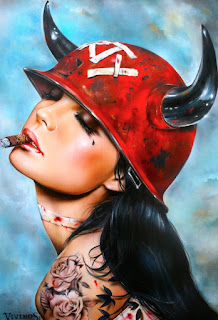 Thinkspace Gallery had works by Brian Viveros that sold out at Scope. His illustrative paintings are on maple board, with bold color, fashion model types, tats, etc. The best thing about my stop here was a conversation I had with proprietor, Leonard Croskey aka LC, who discussed his pricing philosophy. Most of Viveros' pieces were in the 6500 range. He feels its important to bring an artist along slowly, and gradually raise their prices. He said that some of their artists get offers to show at another gallery at double their sale price, but he believes it hurts the artist in the long run by cutting the legs out from current collectors of their works and people that are on the fence, as well as all the possible collectors in that middle range between current and double. When you jump prices that much, you effectively slam the door in the aforementioned's faces and fall off their radars as far as buying more of that artist's work, or buying for the first time. Better to sell all the work and develop several new collectors, then increase pricing on the next round of works, than to sell a few at a high price. This is a very sound philosophy, one that more galleries and artists should use.

Coming: the final installment (whew!) of the Miami Art Fair posts: NADA
If you've enjoyed these posts, please pass the word and post a link somewhere for others to check it out, become a follower (on the right side), and/or leave a comment.
Posted by Joe Borzotta at 1:19 PM