The work at the Affordable Art Fair should be taken in context, that is, this is an art fair where the primary focus is selling art at "affordable" prices. Not that you won't find blue-chippers here (there were Damien Hirst prints available) but you're not going to go to the AAF hunting for cutting edge work like you would at the art fairs in March. There's some here, but the majority is work that has broad appeal. It's also a good opportunity for galleries to test the waters with new artists.
There was ample opportunity for people watching, most attendees were dressed to the nines from hipster garb to club chic to high fashion. With all the hot booth lights and so many people jammed in, it began to get a bit ripe in there but after imbibing a powerful Palomita cocktail it didn't much matter.

As always, I tend to look for trends and I have found quite a few here. One: Pop colors. The overall palette of the room was bright, intense, "out of the tube" colors. Is this because art with that palette sells better? Speaking of pop, comic books were ubiquitous, no doubt in part due to the huge success of the Avengers movie. Below are a few shots, and I admit that growing up a comic geek makes me pre-disposed to this work! Another trend was Basquiat influenced work, however, most of it was borderline plagiarism. I'm all for an artist who is moved by his work to do copies to get a feel for his process (doing copies is an art school learning tradition) but the galleries are doing a dis-service to these artists by featuring their work so prominently while still at this stage. These artists are still basically copying Basquiat, they have not gone through the process long enough to find their own voice. So instead of being Basquiat influenced, they are Basquiat clones.

Onto the visuals (click on art to see a larger version). First up is my favorite of the comic inspired artwork, this piece by young Parisian artist Cieu at Envie D'Art: 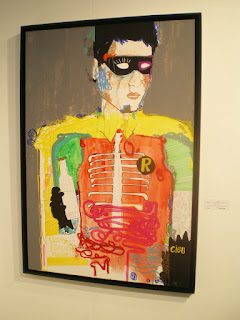 Elisa Contemporary Art had several comics-inspired pieces. First up is "Occult"  24x32", by Oliver Peterson featuring Hellboy. Next is Houston's Mitch McGee with "The Part You Can't See." The interesting thing about this is that the lines are all cut, sanded and stained wood. The third piece is a close-up of work by Don Morris. The most substantial of the lot, it's countless strips of comics pulled into wavy ribbons and collaged, very transformative use of the material. 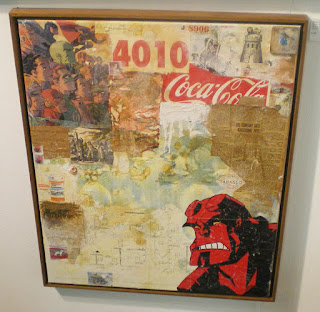 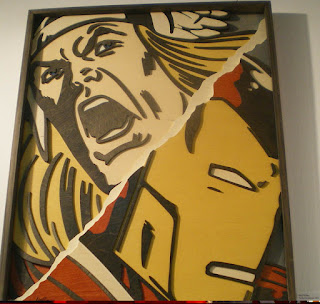 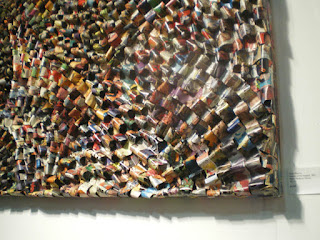 Still more comics inspired work, The Lone Ranger and Batman are made up of square color swatches used by printers and designers, 48x72". By Carlos Tirado of Besharat Gallery, Atlanta. 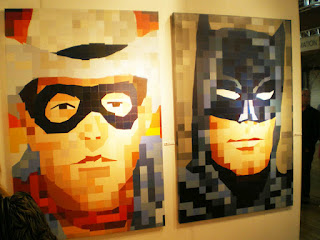 Amélie Desjardins from Canada's Arteria, created these beautiful little gems from reclaimed wood and painted over photos and resin. Most are appr 12x12 and are influenced by spending months at at time in Bali. 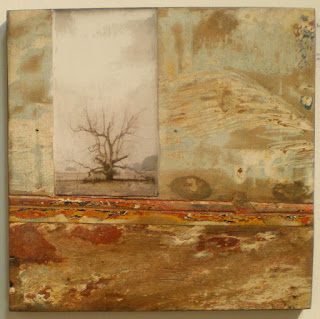 Hoboken, NJ's Barsky Gallery had several pieces by Margherita Martinelli of Creme, Italy. "In Volo 10"  15x18", and "In Volo 2,"  18x12", are mixed media pieces gently illustrated and well-crafted. #10 is a bit more aggressive with its lights and darks and composition, yet both have an intriguing subtlety. 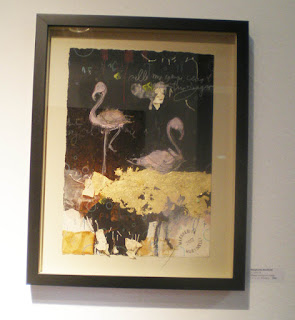 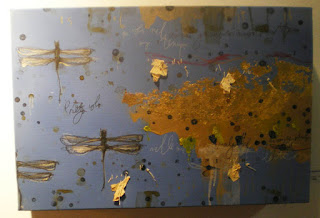 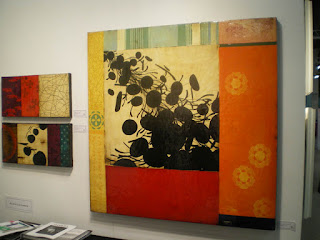 "Love Me" collage by CYEN, at Arteria, Canada. 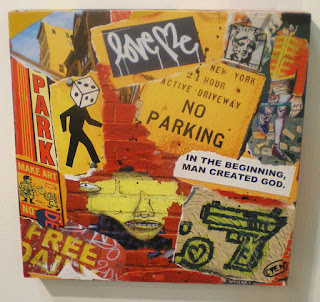 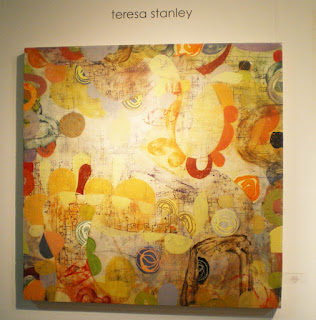 J-Go Gallery of Park City, Utah showed work by Jeremy Mangan. He's interested in the boom and bust of towns (like mining towns) and the subsequent effects on architecture and environment, creating his own mythical landscapes. Top piece is "Panorama" 48x15". 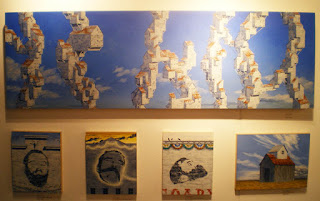