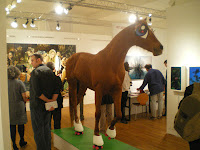 It's the second round of NY art fairs with PULSE moving to May from March. PULSE is usually a solid fair with the established, the soon to be established, and exciting new artists, and this one didn't disappoint. I always keep my eye out for trends at the fairs, and one I noticed was work based on graphs, charts, systems, and statistics. One piece (unfortunately the photo didn't come out) had a series of pins with string stretched across the wall to another anchor. Not quite abstract, not quite geo, yet it demonstrated one of the common elements of these pieces - an almost obsessive rendering of minutiae. Maybe it's the attempt to make order out of the chaos of our 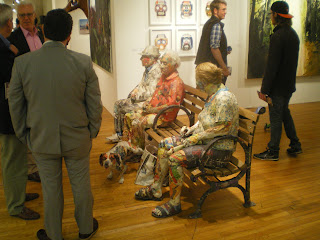 Twittered/text message/internet based world? and make it pretty? Another undeniable element that's been accepted by the art world is the influence that Japanese anime and manga has had on the 20-30 somethings that grew up with it as much as my generation grew up with I Love Lucy, Gilligan's Island and Bugs Bunny re-runs. This is demonstrated in this horse sculpture at Mike Weiss Gallery's booth (note the anime eyes). Probably the most eye-candy booth of the fair, they also had a paper and cardboard sculpture by Will Kurtz of three seniors on a bench with their dog titled "Brighton Beach". Skillfully made, it avoids being too sentimental due to its materials and because it is appealing and creepy at the same time. 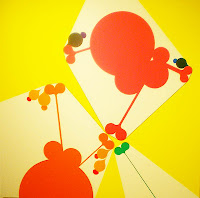 Paintings by Paul Henry Ramirez were shown at Galerie Richard (Paris). I saw one of his first shows at Caren Golden years ago, and he has stayed true to his vision as demonstrated in "Tipsy". His palette and organic and geo shapes have become his signature. Bright and flowing, yet graphically strong, they strike a balance between tight orderliness and amoeba-like abstraction. 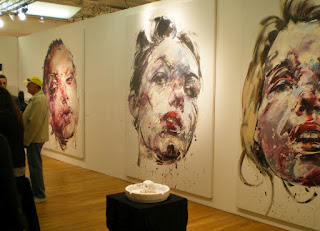 I first saw Philippe Pasqua's large, powerful paintings several years ago as I walked by what was then (I believe) Spike Gallery in Chelsea, or one of that space's reincarnations. I was drawn in and very impressed by his vibrant and vigorous brushwork on these 6-8' figurative paintings. At Zemack Contemporary Art's booth (from Israel) were several large heads by Pasqua, a mashup of Lucian Freud and Jenny Saville, if you will. 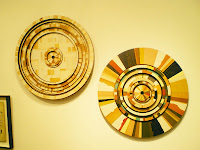 Narwhal Projects from Toronto had the collage work of Jacob Whibley including these mandala-like pieces. Intricate and layered pieces of paper are used in these intricate pieces, impressive for their craftsmanship. Other pieces were Constructivist inspired flat collages, made as Whitley spread his wings doing solo work from his Team Macho collab days.

Benrimon Contemporary, NY, had paintings by Trey Speegle that riffed on the classic Paint-By-Numbers series. Given to him by a friend, Speegle has greatly elaborated on the originals by adding text, and imagery other than what was there originally. They're alternately poignant and amusing.

Hans Benda had work at Miyako Yoshinaga Art Prospects of NY. His landscapes and portraits of female models are moody and intriguing. His composition and light pull you in to these small pieces to see what's going on (left). 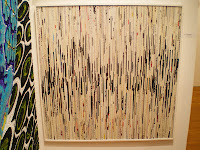 Alejandra Padilla's compositions are made of rolled magazine pages creating abstract works. Clearly, countless hours of prep work and intricate construction goes into each piece, yet with all their hard edges and printed colors there's a flow, somehow managing to look technological and organic at the same time. (Diana Lowenstein Fine Arts, Miami). 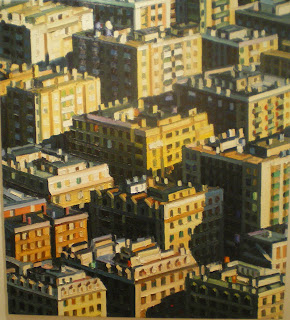 Ralph Fleck's cityscapes are made up of thick, deceptively simple large brushstrokes creating these atmospheric paintings at Purdy/Hicks (London).
(left) 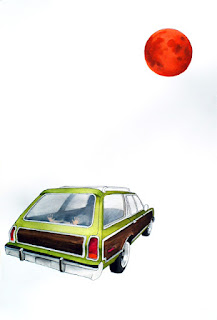