Back in art school, a few of us would often do a "jam session." Like visual jazz except with markers and pens rather than instruments, we'd get a large piece of illustration board,  each would take a side and start drawing. Every so often we'd rotate the board and you basically took up where the person before you left off.

Group collaborations are nothing new in the artworld and are a perfect way of expanding an individual artist's take on their own efforts when mixing it up with others. Jazz jam sessions are invaluable to young musicians who learn from their elders, and for those elders who may be staid or stuck in their own groove, they sometimes garner some new energy from the youngbloods. 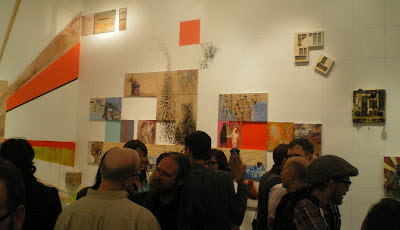 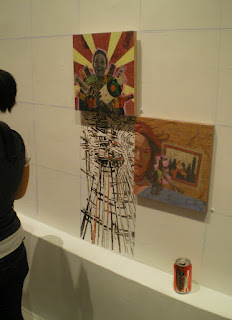 Gutbox is an art collaboration between 9 artists - Nick Dyball, Ray Sell, Ulrike Theusner, John J. Hagan, Heather Hart, Thomas Witte, Jazz-Mihn Moore, Jeff Sims and Seth Mulvey. Much like their musical counterparts, Gutbox "improvises" on a single piece worked on by three or more of their crew. The initial impression from this show, GRID, is the lay-out. The group played off the title and lined the gallery, Lambert Fine Arts, with gridlines, however, they also utilized the old saying of "coloring outside of the lines" and broke the grid here and there. One of the great things about NYC is its grid system which makes getting around much easier, unless you go into the dreaded named, not numbered, streets of downtown and delve into a Seinfeldian nightmare. The basic grid structure is part of the psyche of New Yorkers, and all the members live in a metropolis. However, their geographic upbringing, from suburbs to the woods of Oregon, also informs their work. 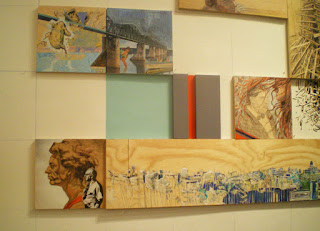 "Gutbox’s goal is to leave no grid unturned" says part of their statement and they don't, exploring everything from aerial landscapes to plaid shirts to computer chip grid designs. Mixed media abounds from Ray Sell's wonderful collage work to John Hagan's renderings. Most of the works are fairly small, which works well here in that they draw you in, forcing you to pause as you travel the grid of GRID.