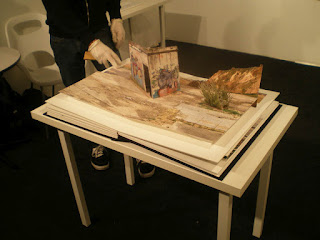 VOLTA is different than other art fairs in that most of the booths feature only one artist. If memory serves, another rule is that galleries have to show different artists each year. Galleri Flach from Stockholm, Sweden, featured pop-up books by young artist, Andreas Johansson, titled "From where the sun now stands." A white-gloved assistant turned the pages (see photo) of these books which are a cross between children's books and a photo journal of mostly urban sites. Excellent craftsmanship and intriguing imagery. 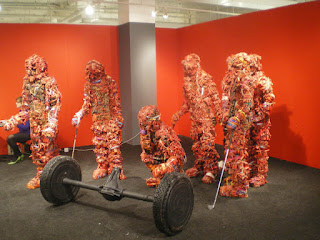 Carl Emanuel Wolff created an eye-catching installation of six figures that appear to be on a golf outing with an axle of a vehicle in front of them. Each figure is completely covered with strings of fireworks, accented by the red walls of Schuebbe Projects' booth. Reading the statement surprisingly talked of this piece being anti-institution where artwork is "sealed-off," "neutralized," and "reduced to a commodity." Wolff shows in unusual places, photos showed this exhibit in a wooded area. It talked of things from Romantic art to dissolving the lines between art and life and so on, but not about the obvious effect the art had: an unsettling feeling that these were walking bombs, terrorists with firecrackers and M-80s, which is very relevant these days especially in a city that suffered a terrible attack. 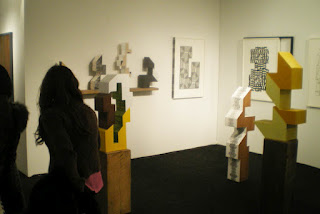 Throughout the fairs was quite a bit of geometric sculpture and 2D work. Rachel Beach showed a mash-up of both (right) in her booth at Blackston Gallery. 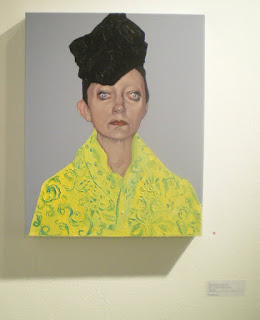 Francesco Merletti at Magrorocca Gallery from Milan showed several painted portraits of his wife. He plays the role of director as well, dressing her in clothing and headgear to interpret "different roles." Her Marty Feldman-like eyes (the British comedian who famously played Igor in "Young Frankenstein") add to these off-beat realistic portraits that seem from another era. 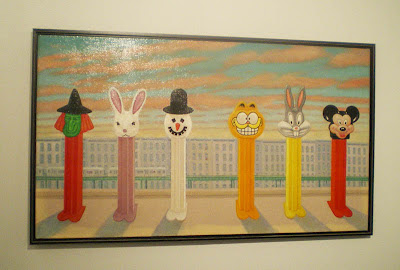 VOLTA is always a solid show. The booths also have pamphlets about the artist and the installation, a nice touch for attendees. They inform as well as raise questions, a wonderful combination.
Posted by Joe Borzotta at 8:50 AM