When I go to look at art, I go with an open mind as to the what, why, when and where of what I'm looking at. Of course, this IS a blog, so personal preferences and opinions are a major component of these posts. I'm always enthused about the Art Fairs. They are ex 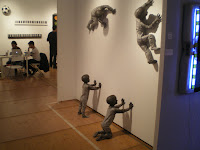 citing and educational and since most artists work in solitude, they present an excellent opportunity to talk about art. Due to the small spaces inhabited by each gallery, it's very easy to strike up conversations about a particular work or artist they're showing. As an artist, it gives me the chance to find new galleries to send my work to and to keep in touch with gallery owners that I've already established a connection with. As a collector, I get to see loads of art. As a soon-to-be-once-again gallery owner/curator, I keep my eye out for work I may want to show. 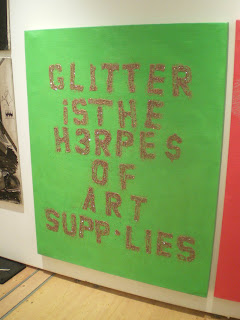 Yesterday was a wild ride - Scope was good, but the Independent gave me a reaction I didn't expect. Scope was a solid but not spectacular show. Many galleries were showing the same artists they've shown before, and others showed work that was a mix of safe and perplexing. Video art seems to be having a resurgence, but more as a component of a piece rather than simply a monitor. Even when it was just a screen, it was encased in a fancy frame. A German gallery had a photo of a young woman with large sunglasses, each lens being a video flat screen of her eyes. Another had 2 young girls sitting in a train car chatting, and this was incorporated into a larger Lichtenstein-ish image of a living room. The same gallery had the creepy babies crawling on a wall (above right). Text pieces were well represented, but most were one-liners or uninteresting, except for the amusing one about glitter shown here. 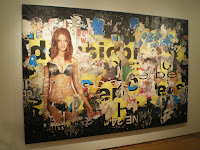 White Walls Gallery from San Fran had new work by Greg Gossel, large pieces that were totally collaged from billboards etc. His previous work incorporated silkscreens, these had none. These seem more transitional for him than a new direction, but they're solid and I'm curious to see where he goes next. Notable simply because of their playfulness and enthusiasm were paintings on wood by self-taught Ferris Plock. He spent time in Kyoto and became enamored with Japanese fabrics and "samurai" designs, and 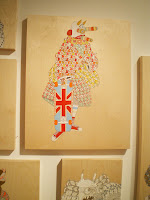 did these pieces that mix in modern hipster elements like skateboards with traditional imagery. 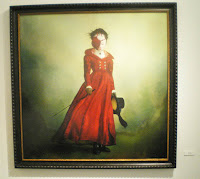 Corey Helford Gallery from LA had several pop surreal pieces, notably a 55x55" framed piece by the enigmatic Ray Caesar. He does truly amazing work on computer that look like detailed paintings. "Second Sight" is a one-off, he usually does editions, and this was layered with coats of varnish.
Please click on the image to see a large version.

I snapped a shot of this giant blue shape with an orange line through it as an example of one of the worst pieces I saw there, turns out this foreshadowed the Independent. 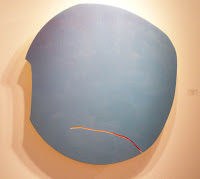 The third Independent Art Fair is more open, less the grid box cubicles of other fairs. In the NY Times today, Roberta Smith called it "perhaps NY's most exclusive, self-consciously hip contemporary-art fair." As written at the beginning of this post, I go to art shows with a very open mind. It has been years since I felt that mix of frustration/disdain/confusion like I experienced yesterday. Yes, one has to cut some slack for cutting edge art as it pushes boundaries and uncharted waters. Too often I looked at pieces thinking things like, "There's the requisite hut made of found objects, there's the big assemblage that looks like a college 3D project, oh, and there's the plain white canvas displayed as if it's some ground-breaking triumph of minimalism - AGAIN." Why would a gallery from Europe pay thousands of dollars for a booth and only show a green metallic square? Most of the painting there was simply awful - awful palette, awful application, awful composition. Maybe the point was to be awful? It's possible.
Andrea Bowers's tree-sitting apparatus at Andrew Kreps was a piece that I looked at and sarcastically thought, "Yep, that'll be in the Times" and viola! There 'tis. Much of the work at Independent seemed to be referential, which raises a host of questions (which is indeed a good thing, at least) about it being too insider? too pedantic? help or hindrance? So much here seemed to be fodder for the average and the uneducated to snicker and sneer at, yet, it was difficult to fight back the thought that they might be right. Uggh. On the positive side, there were interesting small abstract works throughout, and some mixed media constructions were intriguing and I humbly admit, merited more time than I gave them.
However, today I rise up and shaking it off ala Charlie Chaplin at the end of one of his romps, I'll continue down the road to other Art Fairs with a fresh outlook and tucked away sarcasm.
Posted by Joe Borzotta at 7:10 AM