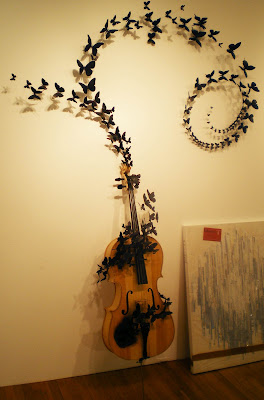 Made my way to the PULSE NY art fair show on Friday and saw quite a bit of interesting work. Previously I noted the trend of words and text, but the other trend was butterflies! Lots of butterflies throughout all five shows I attended, from Damien Hirst prints in metallic inks to sculptures to Sandy Skoglund photos. Here's a sculpture at the Morgan Lehman booth.

Brooklyn's Black & White Gallery had some cross-stitched portraits from Alicia Ross's "Hot Mess" series, phrenological (shape of skull and bumps as it relates to moral character) studies of famous/infamous wo 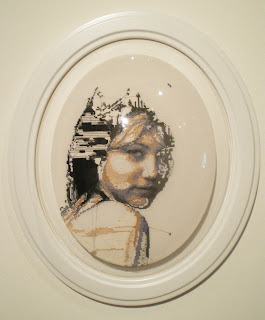 Fouladi Projects from San Fran had this hilarious text painting (below) by Graham Gillmore, a rejection letter to a gallery, rejecting their rejection letter! The gallery also had a signature Barry McGee, a painted face on an empty flask bottle of liquor for five grand, which to my knowledge is way, way out of range with his prices. Odd. 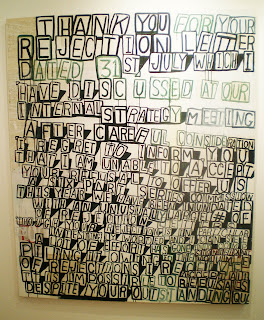 Over at the SCOPE show, Spinello Projects from Miami had impressive chalk pastel pieces by Barnaby Whitfield (below right). A difficult medium to work with, Whitfield is deft at handling chalk and has created some thought-provoking images. Also at Spinello were some oil portraits by Kris Knight. Realistically painted with an intense color palette, this young artist has the technical chops and I'm curious to see what he'll create if he moves beyond straight portraiture. 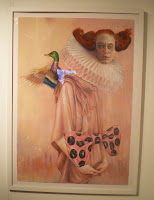 Janine Bean Gallery from Berlin had paintings by 20-something artist Anna Bowory. Canvas in the 3-5' range of women painted realistically and a bit washy and lots of - yes, butterflies. Her career is taking off and is worth keeping an eye on.
Contra Projects had large faux cereal boxes by Trustocorp satirizing religion and big banks. 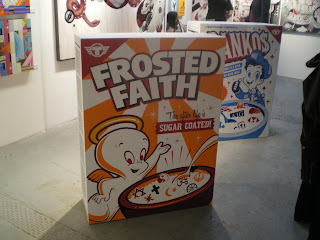 Also grabbed a pic of this mixed media piece by Jason Shawn Alexander at 101/exhibit from Miami. 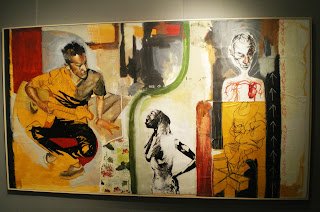 Lastly I made way over to the tugboat on the pier off the West Side Highway, home of the Fountain Art Show. This is the most bohemian of the shows with a strong Brooklyn feel. Similar artists from past years with some new additions, it feels like an artist studio building on water rather than an "art fair" with work varying from an art school-like mashup of styles and media to more mature work by others. Collage artist Ray Sell had a large assemblage piece which was not only successful but fits right in with his previous work. McCaig Welles had some pieces by the Morning Breath team who mix layers of silk screened magazine images and ads with cartoony odd faces (sorry, pic didnt come out). Evo Love presented chairs covered with small, fun objects and covered in resin. Much of the other art was very raw and has a ways to go in its development, but it works in the anything-goes vibe at Fountain. So, if you decide to hit the art fairs next year, don't just do the big one, Armory - make sure to hit the other shows as well, you'll be glad you did!
NOTE: click on any of these images to see them larger.
Posted by Joe Borzotta at 4:50 PM