The beginning of March in the art world means one thing - time for the Art Fairs in NYC! Last year I went to several smaller venues (and wrote about them here) but skipped Armory. Just as well because everyone I spoke to was pretty down on it, however this year I made it my first stop to avoid the weekend insanity.
The Armory show is massive. So much work from all over the world, some of it great, some mediocre, some confusing...so best to go in with as open and objective a mind as possible. Looking for trends (I write this on Day 2 after attending 3 fairs so far) I've noticed quite a bit of text based work. Not so much statements as words for words sake, or playing with letterforms, but there were several narrative pieces.

One of the first I saw was at Cajablanca from Mexico, a series of monochromatic paintings with text in the center. Artist Gustavo Artigas handpainted the name of the color and below it the health warning and side-effects from using that paint. 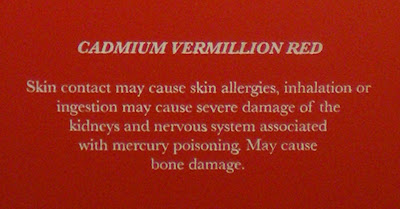 Nice to see David Kramer's watercolor and text based pieces again. Seen his work at different galleries many times over the years, the text often has a retro feel as does some of the imagery. The text varies from sayings and ad slogans to slices from a novel or a diary. 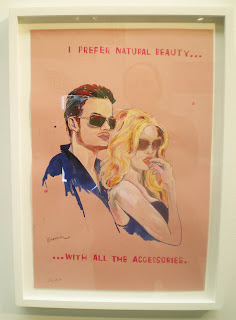 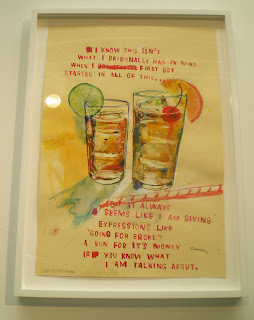 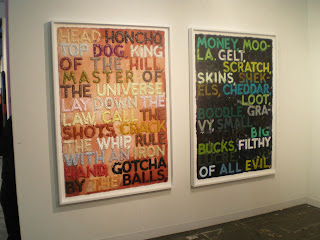 Right is a random shot of another text based painting (I didnt get the artist's info) but I did get info about the other piece from London's Hales Gallery. The words in these pieces are painted large in vibrant colors in a novelty typeface probably of the artist's own making. In them, Laura Oldfield Ford comments on the art world and struggles of an artist in often humorous terms. Her encounter with Ronald Feldman is funny on one hand, yet on the other it shows the difficult hurdles, barriers and sometimes non-sensical aspects of the artist/gallery relationship. 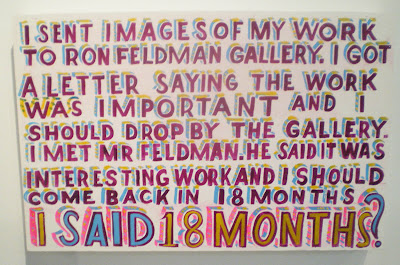 Not just text, but there were several images of books and actual books used in pieces. Doing paintings of old bookcovers or spines of books is not an uncommon subject in painting, and at Armory and Volta were several drawings and paintings of books in various media. One gallery had bookcovers splayed and collaged on raw linen canvas. Others had actual books with the covers painted over, and one had pseudo digitally recreated covers. One gallery from Japan had a well-rendered watercolor of a few books and I commented to the owner that it was a common thread throughout what I'd seen so far. "It must be the economy," she mused. I asked why, to which she replied, "Maybe people can't afford to go out so much and they're staying home and reading books. It's cheaper."

The Armory show had much more than text pieces. It was very much anything goes from styles to media, but overall it felt a bit "safe." In the past, France and Germany's galleries presented edgier, pushing the envelope, in your face type work especially in sculpture and installations. Last year I felt French work had more meat to it, that they were pushing but hadnt gotten there yet, but were onto something. This year, not so much, it felt a bit repetitive and not very energetic. Italy surprised me with the energy in their modern work, the artists seemed to be having fun, the work had more life to it. Another observation at Armory and Volta was the lack of sexual themes, notable only because at these shows there's usually a fair amount of graphic (and often banal) work dealing with sex. 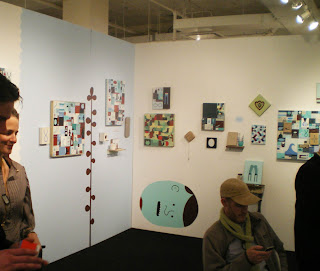 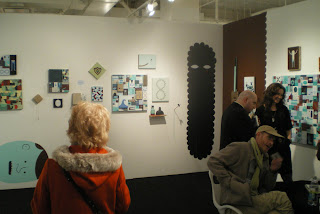 Jim Houser was featured at Jonathan Levine Gallery's booth at Volta. His trademark text pieces and palette were in full effect with new and old paintings, painting on the walls of the booth, and his music playing. I've written about Houser's work here in a previous Old Metal Lunchbox entry.
Armory and Volta didnt have alot of painting which I attribute to it having lots of EVERYTHING - drawing, collage, photography, sculpture, installation, you name it. A.D.D. on the part of galleries or the artists? Hmmm... 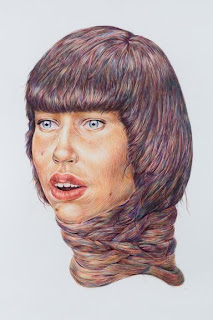 Near the entrance to Volta check out the very cool Nick Cave sculpture, a lifesize figure with dozens of tin horns and noisemakers on the upper body. ADA Gallery had 3D photos and watercolors by George Kuchar (a huge influence on Warhol and John Waters), and the Mulherin Pollard Gallery featured amazing large scale (like 4'x6'!) colored pencil drawings by Winnie Truong . These are eye-catchy, fun and well-crafted portraits with hair gone wild! Untamed surreal hair, beards and pig-tails - a must see at Volta.
Berlin's Wilde Gallery had several interesting pieces by EVOL with lots of red pins (sales). EVOL started as a product designer in Stuttgart and began doing graffitti on electrical boxes of faux building facades. The pieces here are done on cardboard and include windows and terraces with the cardboard acting as the building facade. They are not done with brush but with several layers of stencils and spraypaint! Really exciting work and the gallerist described it to me as "Banksy and Shepard Fairey gone super German obsessive." 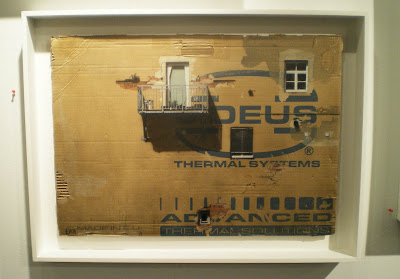