"Private Future" is the current group show at Marc Jancou Contemporary, curated by Michael Cline. A veritable variety show of styles, media and imagery, the show wanders far and wide. 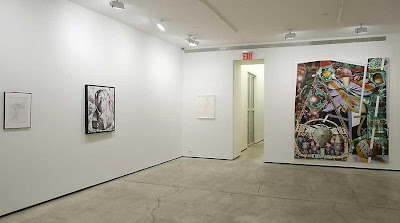 "These artists re-present the world as their own and refashion it to their own private means" makes sense with the title, as these works are individual and not of a distinct theme. 16 artists, mostly male - graphite, mixed media, acrylic, photography - abstract, pop, commercial, realistic - all find their place here. 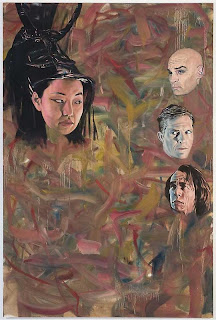 Jim Shaw's "Kill your darlings #3," 48x72" (left) has floating heads glaring at eachother on a swirly ground, an Asian woman on the left and three men on the right. Noir-ish, and this simple composition allows for imaginative narratives to be created by the viewer.
On the other hand, Lari Pittman's "Untitled #6," mixed media 88x102", (above on right side of wall) is a collage of recognizable and unrecognizable shapes and images drawing you in but not via a narrative. Then you have Peter Saul's "Squeeze Pimple," acrylic, 59x59" a suited figure with a pimple head which is gross but eye-catchy, a pop image reminiscent of Wacky Packages and Garbage Pail Kids stickers.
The ages of the artists in this show is wide-spread as is their geographic locations, again adding to the meandering feel of the show. Marc Jancou Contemporary, 524 W 24th St, NYC, show up til Jan 29th. 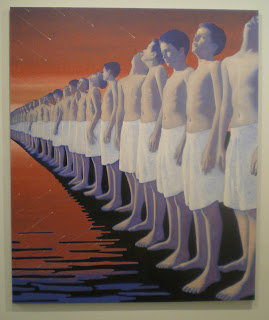 Mike Weiss Gallery (520 W 24th St, NY) has a second solo show by Christian Vincent titled "Tunnel Vision." Many of these large scale pieces feature rows of young boys in perspective, a reference to the title. He also seems to be commenting on conforming to group mentality or instruction - the tempering of the individual, blind obedience, or "the desire for empowerment through belonging?" Are they in a phys-ed class? at a cult or religious camp? is the boy pointing to a "messianic figure" as the statement suggests?
These eight large-scale oil paintings have a retro feel in one way, while also imbued with a sense of futuristic foreboding, sort of like the feeling one gets when watching Fritz Lang's "Metropolis." The images remind me of an old stereotypical British boarding school, where conformity and following rules is paramount and individuality is squashed with harsh discipline. Vincent is a resident of LA now, but I'm curious about his past. Paintings that bring other images to mind and make the viewer curious about not only the imagery but the artist must be considered successful. Through February 12th. 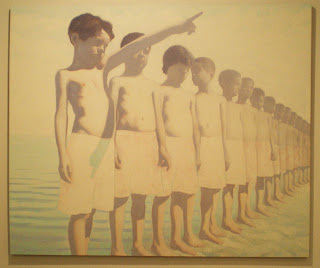