"Haymaker" is the current show at Freight & Volume, 530 W. 24th St, NYC. A group show with the main room featuring paintings by Damian Stamer, a mash-up of abstract expressionism and realism. Fairly large canvases with wide washy brush strokes with rural images of old barns and shacks, fields, and barely rendered objects that resemble bales of hay. Makes for an interesting discussion - it's all brushstrokes, but some combine to form a recognizable image, some don't...can they live amicably in the same composition? 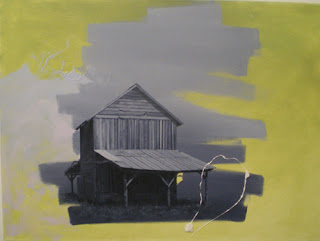 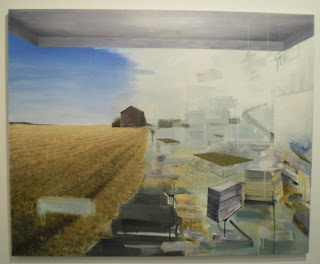 The statement says that Stamer's imagery reflects "the art market’s fluctuations, its in-favor/out of favor oscillations between the two genres." Whether anyone would take that from the paintings without the statement is debatable. Regardless, there is some good painting going on here and Stamer meets the challenge of combining two styles/genres quite well.
Above left: "Golden Leaf" 30x40", oil - Right: "South Lowell" 58x72", oil 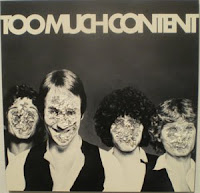 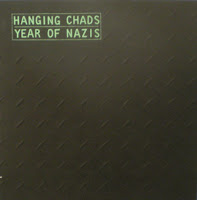 t in the show, Eric White, takes a jab at music market sound bites by recreating, in actual scale, album covers from the 70s and 80s.

I've been following Michael Lyons Wier's galleries for many years because of the consistent high quality of the work. This is to my reckoning his third space and he still maintains Lyons Wier Limited over on 7th Ave and 20th.
This is the debut show at his new space, a group show of some of the artists he reps. Mostly geared towards realism but with stylistic variety - photo realism, loose painterly, pop, and in cases like the always amazing Cayce Zavaglia, mixed media.

One of the most underrated artists today, her portraits are layered and woven onto linen canvas with crewel wool, and then a painted background. "Abbi," the size is 11x27" (detail left) shows her amazing skill which has been championed in this blog before. When seen in person they're kind of awe-inspiring. 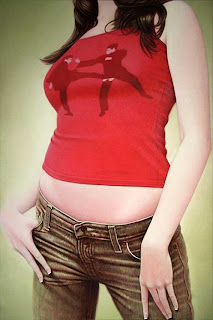 James Rieck's "Cockblock," 82x54", is interesting because the artist only uses 3 colors in this series of paintings: napthol crimson, sap green and white. The model is wearing a t-shirt with Bruce Lee images and humorous titles which correspond to them. 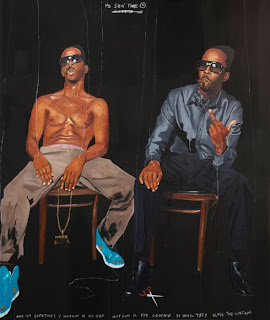 One more piece of note is another personal favorite, Fahamu Pecou. His piece, "Him and I (and Me)," acrylic and oil stick, 60x72" continues his ballsy self-portraits as pseudo pop/hip hop/celebrity icon. There is an energy in his work with a dash of Kehinde Wiley and a hint of Basquiat fed into the hip hop hype machine.
This group show is up til January 29th and Lyons Wier Gallery is located at 542 W. 24th St, NYC.
Posted by Joe Borzotta at 2:40 PM