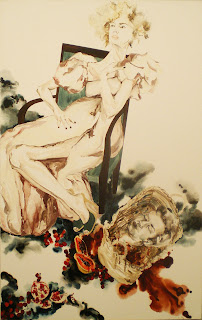 I first saw Elisa Johns' work at the Scope Fair, and recently at her solo show, "Huntress," in the Mike Weiss Gallery. The large paintings show better here with plenty of white wall space which accentuates the stark white in most of these ethereal pieces.
The female figures come from myth and history, yet Johns' interpretations of them are with a fashion illustrator's sensibility with references from modern fashion magazines.
(Left: "Judith With the Head of Holofernes", 66x44")

The application of the oil paint is a mix of thin washes - some linear, some allowed to bleed. These aren't tight, photorealistic copies from fashion magazines, but are loose and freely drawn in an almost naive, sketchy style. Part of this comes from her nod to Chinese pen and ink drawings, composing the image to read vertically. 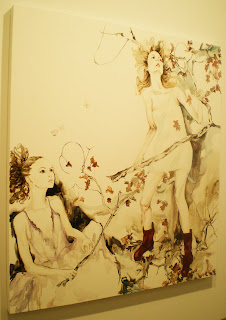 Johns contrasts her washy applications of color with impasto, palette knife layers of paint within the images but she also applied layers of white to the background, pointed out by the artist as they're not so obvious to the eye. Subtle impasto, isnt that an oxymoron?
Another interesting contrast is the soft, washy overall feel of the paintings yet there is some heavy, sometimes violent, imagery at hand here - Diana taking aim at a victim, and the biblical heroine Judith with the decapitated head of Holofernes. 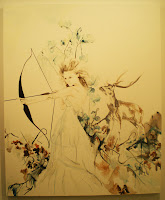 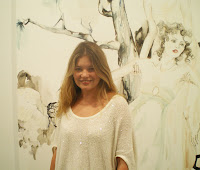