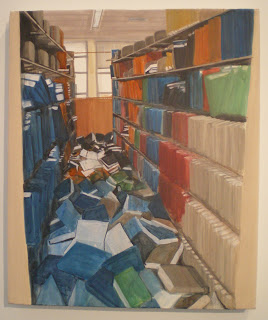 A bit behind am I, so here's some catch-up on gallery visits in Chelsea, NYC. Nancy Margolis Gallery had a show featuring works by Wendy Heldman. I've written before about this trend I've seen the past year + of environmental chaos -- buildings exploding or images of them being deconstructed in a wild diagrammatic fashion. Also houses, cityscapes and more in a representational and abstract style. Heldman had pieces of library racks with books scattered all about - "We Just Keep Taking Turns" and "One Against Two". These were made from photos of libraries in California after an earthquake. I discovered this when talking to the woman working at the front desk (don't be intimidated to ask questions about the work! Often they are bored or simply welcome a break to chat about the art and you usually get some interesting info), and I mentioned the trend I've noticed and she agreed. Apparently, this has indeed been a frequent element in works as of late.
What could be the reason for this? Is it because this is a common CGI (computer generated imagery) effect in hugely popular home video games? Think of all the grand explosions and mass destruction so realistically depicted in Hollywood films courtesy of CGI - I believe this has all sunk into our subconscious which gets stirred into the soup of peoples' visual creative vocabulary. How could it not? Every artist is influenced by their environment, what they see, hear and feel. 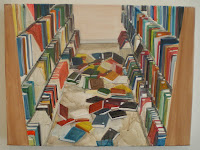 Or is it deeper - a feeling of danger, post 9/11 trauma, insecurity, and lack of faith/trust in our leaders and political system that creates this feeling of our "world" being torn apart by forces beyond our control? or is it the artist TAKING control and deciding when and how he/she will deconstruct their world. Perhaps I'm reaching too far, but the more I see of this imagery, the more questions it raises as to common motivations and inspirations for it. 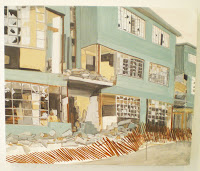 "Little By Little and Then Not Even That" is an acrylic piece of a decrepit building that's obviously been sitting a long time in that state. Was it commercial or residential? Where is it? Why did this happen and how? Natural disaster or an explosion? A successful piece in that it triggers these thoughts and questions and stirs the imagination. 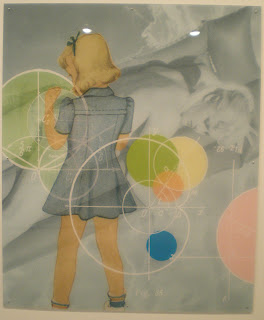 A retrospective Cindy Workman's works of women were on view at Lennon, Weinberg Inc this summer. Composite images address the many roles women perform, or feel compelled to perform, in society. "Fig. 35-92" (left) from 2000 combines drawing with digital imagery with a blond child, a scientific diagram and a black and white sexy image of a woman, all layered in this intriguing image. 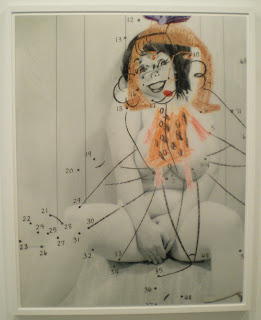 "Pebbles" from 2003 (right) presents a more pornographic image of a woman with the face of Pebbles Flintstone, a child-like crayon drawing of a child over her face, and a connect the dots image of a skating girl. A jumble of females in different styles and media in a simple yet powerful composition.
Posted by Joe Borzotta at 7:48 AM