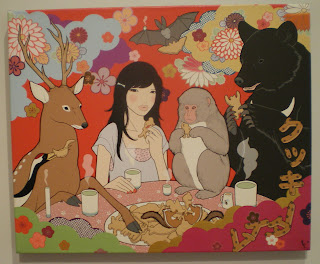 Yumiko Kayukawa shows frequently on the west coast, so it was a treat to see her large show at Joshua Liner Gallery. I've been a fan of her work for years and bought a painting by her about 4-5 years ago. I wish I bought more, now her work goes for 2k to over 7k (much more than what I paid) but still reasonably priced for her success and the quality of the work.
Kayukawa was born in Hokkaido, a northern Japanese island. Influences are pretty clear in her work: Japanese and American pop culture, young girls, graphic design and all critters great and small. Although there's a legitimate temptation to call her work cartoony, don't confuse it with anime. Her work does have a comic book feel to it, being delineated in black, but it's more sophisticated and layered. At times the pieces are a bit too precious and cutesy (as in Cookie Time), but "cute" is such a huge part of Japanese visual language and culture, it's hard to fault her for it.

The Japanese also have a preoccupation with very young girls, teetering on the edge of creepiness at times. Yumiko's girls have a sensual air about them, that heavy metal sexy schoolgirl posed vibe, or images where they are in on the joke, or images where they are more mature and simply in youth's full bloom. In an interview on Crowndozen.com she said, "Girls posing in sexy ways is just kind of charming and amusing to me." 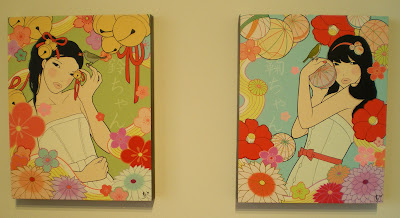 Her compositions usually involve a girl or girls, animals, and Japanese lettering. Her palette is bright and pop influenced (Suzuchan and Marichan) yet she can tone it down a notch to create an altogether different feel (Lotus and Iris).

Yes, Yumiko's paintings are eye candy. Yes, they titillate. Yes, they're cute, funky, punk, elegant, colorful, fun, surreal, graphic, and well-executed...add all that up and you have some great work here.
The piece below with the candles is "Fate" and the other is "Kamen (masks)". She works with acrylic and ink on canvas and sometimes illustration board. Unfortunately the show comes down before you read this, but you can see most of the work online. 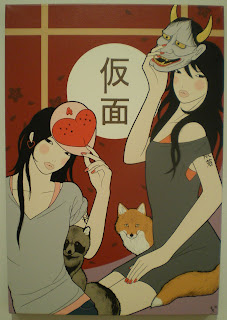 29 year old Vancouver artist Ben Tour has the second room for his "Crash and Burn" show. An illustrator that straddles the fine art world as well (a common occurrence in Pop Surrealism), Tour's show here has some striking images, but overall is uneven.

The work here consists mostly of portraits of women done in his signature style of loose, washy rendering with sometimes design-y and sometimes violent splatters and explosions of color. Some, like Cold 1, are visually arresting and hold up after the initial eye-pop is over. Therein lies the problem with some other pieces, particularly the Orphan Dreams series and Grief Girl. They're not fully realized, and when painting waif/model/thin young women, it's a thin line between relevance and cheesiness. These pieces seem incomplete and rushed, like first drafts, unlike Blood 1 which has a fullness and is simply rendered much better. (Blood 2 is pictured here as well as Cold 1). It'll be curious to see how Mr. Tour's work evolves from here because there certainly is some raw talent and youthful energy to his art. 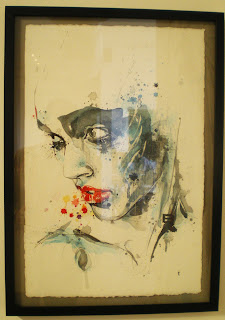 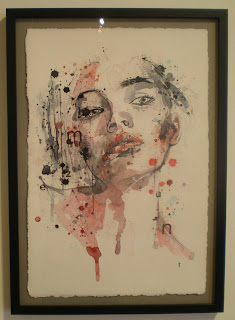