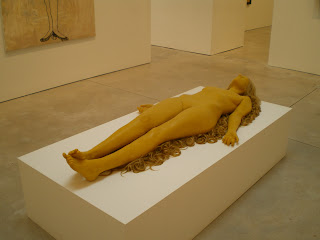 Cheim & Read Gallery (547 W 25th St, NYC) is hosting "The Female Gaze - Women Look at Women" through September 19, 2009.
A multi-media show of nearly three dozen female artists, the work is diverse and engaging for the most part. Whether it actually does reclaim the traditional domination (still so?) of the "male gaze" can be debated at length, and the press release is fertile ground for this. Quoting Laura Mulvery's essay "Visual Pleasure and Narrative Cinema" and Wendy Steiner's "Venus in Exile: The Rejection of Beauty in 20th Century Art", it's worth getting a copy of the release as a starting point to explore their essays and this show - but for this post, I'll stick to the visuals and not the theory.
So much solid work, alas I only have these three shots. Vanessa Beecroft's "Blond Figure Lying" 2008 is slightly larger than life, 77" long, a nude yellow figure of water resin coated in beeswax with long blonde hair. A cadaver? Lady Godiva? a sleeping woman? or a modern fetish fertility figure more Maxim girl than Venus of Willendorff? 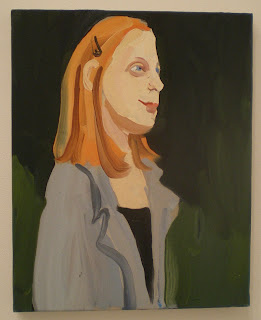 This oil portrait by Chantal Joffe, "Anna," 2009, is one of the most unassuming pieces in the show, but I was captivated by its simple directness and the likeness. You feel as if you know or have met this average looking woman, and even with its simple broad brushwork, the viewer gets a sense of this woman's intelligence and confidence. Mission accomplished in terms of portraiture. 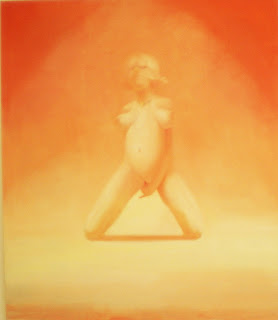 done in her signature soft pastel fuzzy style featuring a female with large upturned breasts, this painting measures 84x72". Her Playboy cartoon-like females always create some discussion and/or controversy, mostly centered around if she is having a laugh at our expense or is there more here than meets the eye? The press release states that the "exhibition attempts to debunk the notion of the male gaze by providing a group of works in which the artist and subject do not relate as 'voyeur' and 'object,' but as woman and woman." So does Yuskavage's portrait of a woman on her knees masturbating satisfy this claim? As I said earlier, this show is fertile ground for discussion...
Posted by Joe Borzotta at 5:22 PM