Happened to catch an interesting show by accident at Lombard-Freid Projects titled "The worst condition is to pass under a sword which is not one's own," an interesting installation by Michael Rakowitz.
You're first greeted by a large replica of Hussein's Victory Arch, made from deconstructed GI Joe figures, papier-mache from Saddam's novels, and toy light sabres. 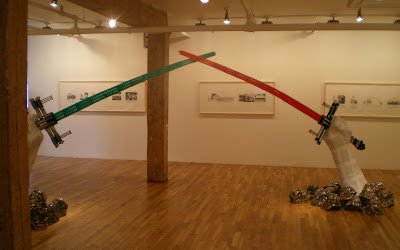 Seems the premise of the show is Saddam and Usay Hussein's fascination with sci-fi, especially Star Wars. At the base of the faux Victory Arch are helmets cast in resin I believe, with more toy parts mixed in. The odd thing is that these helmets are just like Darth Vader's minus the front face part, which along with ski masks and curved swords were actually the uniform of his paramilitary group. It seems like a parody at first until you realize the eerie reality of it all. 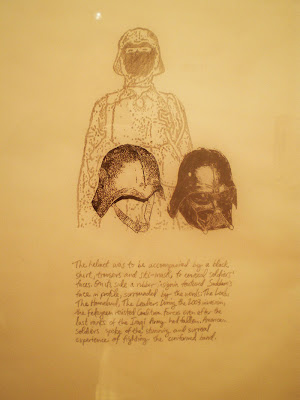 Along the walls are long framed drawings on paper done in pencil and ink. These explore the second aspect of this show, "the intricacies and complexities of how science turns into science fiction and vice-versa, capturing imaginations and becoming militarized." Going from hot air balloons to young Gerald Bull's story to the CIA, Saddam, super-guns, and into the bizarre intertwining of the movie Star Wars and the Husseins' twisted reality. It seems so adolescent and would otherwise be easy to laugh off if the events weren't so close chronologically. "On the eve of the Gulf War, the Star Wars theme music played as Iraqi soldiers marched underneath the monument for Iraqi TV cameras."
This show is up til 4/4/09 at 531 W. 26th St between 10th and 11th Aves in NYC. (Click on any image to view larger)
http://www.lombard-freid.com/home.htm 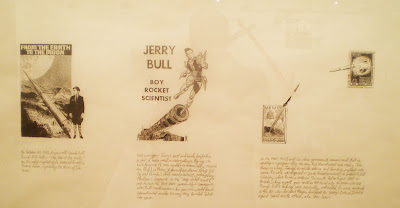