Part of an artist's homework is "Gallery Hopping." Doing your due diligence, research, homework - however you label it, hitting the pavement serves several purposes. Before you submit work to a gallery, you have to make sure your work is right for that space - a gallery showing realistic cityscapes isn' t likely to be interested in your minimalist canvases painted black and covered with beeswax. Gallery Hopping helps in many other ways, but I'll save that for another post, today I wish to write about some recent shows I saw. 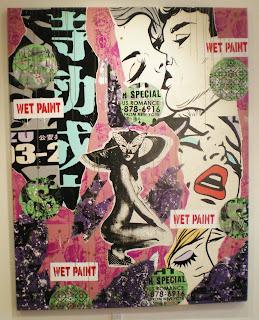 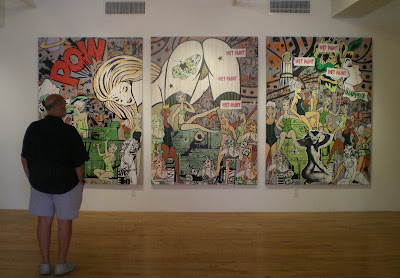 First stop was to see the AIKO "Love Monster" show at Joshua Liner Gallery. AIKO, born in Tokyo and now residing in Brooklyn, was part of the group FAILE that did street art, wheatpasting their way through cities around the globe. Her work is obviously pop and influenced by street art, kawaii ("cute" in Japanese) culture, and "globalized depictions of female sexuality" mixing screens, stencils, and blowups of images (many from comic books) repeated throughout the show. There are many artists doing this type of work (Greg Gossel comes to mind) and it's eye candy and draws you in, yet in some ways the artists paint themselves into a corner and the works become a one-trick pony. My impression is that AIKO is aware of this compared to others, so it'll be interesting to watch how, and if, her work evolves.

Tony Shafrazi Gallery had a large show by Theodore Knobloch of Germany, his first solo in the US. Many of the paintings of are of a seaside town - boats, children playing, shacks, all painted realistically but somewhat deconstructed with large areas of color, taped straight edges mixed with loose brushstrokes and cropped composition. The show loses some steam compositionally with several paintings having an image (ladder, pole etc) going straight down the middle - clearly done intentionally, but to the detriment of the overall image. 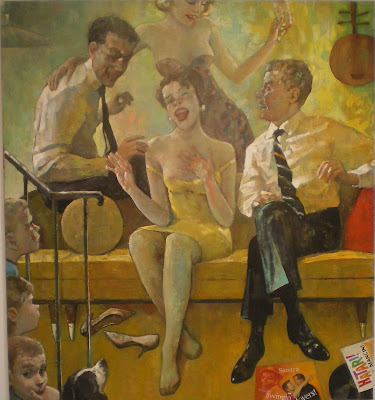 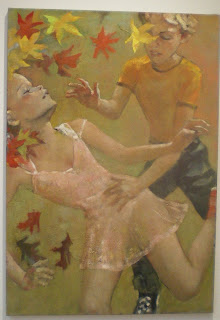 Mike Cockrill showed his "Sentiment and Seduction" paintings at Kent Gallery ("Hatari" left and "Tag" on the right). First impression was of John Currin and Lisa Yuskavage influences, the slightly off-kilter, sexually-undertoned scenes of daily life. Snapshot like moments (not as photo-realistic as Martin Mull's or Eric Fischl's work) where someone or everyone's guard is down and there's some naughtiness afoot. The statement suggests he is exploring the "rich transition from the world of childhood fantasy to adult awareness in a manner that is both playfully innocent and sexually charged." "Flag Day" shows a girl scout, shirt unbuttoned and becoming aware of her own sexual prowess next to an oblivious boy (you know, girls develop quicker) whose hormones havent kicked in yet. 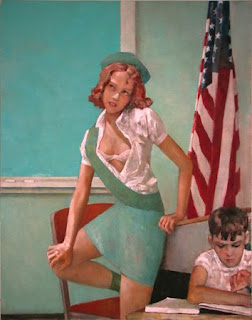 Cockrill grew up in an area of Virginia where most men worked for the CIA, FBI and State Department and secrets abounded, a state of mind that is present in these pieces. You really sense this in "Hatari" - notice the middle boy staring straight up the woman's dress and ya gotta love the Sinatra album on the floor next to the Hatari soundtrack.
Next: Portraits, Powhida and Pablo
Posted by Joe Borzotta at 11:36 AM